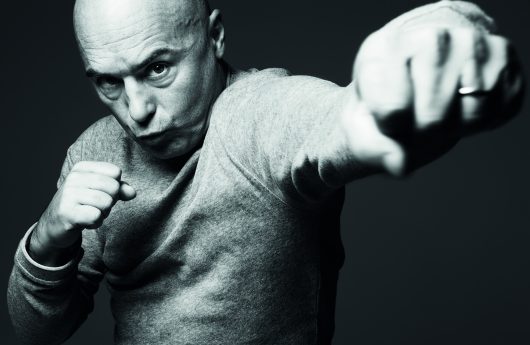 Award winning Italian actor Luca Zingaretti was recently in Melbourne for the 16th Lavazza Italian Film Festival (LIFF), hosted by Palace Cinemas. Known in Australia for his leading role in the popular series, Inspector Montalbano, which broadcasts on sBs, Luca Zingaretti featured in two evoking films during this year’s LIFF: Edoardo De Angelis’ “Perez” and Marco Pontecorvo’s “Partly Cloudy With Sunny Spells!” And during his short stay in Melbourne, he was interviewed by Segmento’s Bridget Borgobello.

Is this your first visit to Melbourne?

Yes, and the very first time in Australia. I was supposed to visit at least two or three times in the last ten years. A very close friend of mine spoke very highly of Australia and tried to get me over here. My friend does travel documentaries for Rai and he travels the world doing this. He had plans to come to Australia and I was going to join them but unfortunately it never happened.

Now this opportunity came along to participate in the film festival and although I’m a new father to a baby girl of only 50 days, my wife said, “Go, go see Australia!” and here I am. I really want to come back here with my family and take the time to see everything with them.

Now that you have had a taste of Melbourne, what genre of movie or type of story would you film here?

So many! Melbourne is much more European compared to Sydney and so is its atmosphere. With its ambiance and architecture, Melbourne is a great set for a lot of different types of films. In these few days I have heard some fascinating stories from Italo-Australians, which are all worthy of being told. Stories born of hardship through to joy and all of them could easily inspire great cinema.

In Australia you are well known for your work as Inspector Montalbano, however in your career you have played many leading roles in films, including infamous characters who have shaped the history of Italy. Is there an outstanding historical figure that you would like to play?

I would like to portray and even direct, the life of Giuseppe Garibaldi. Here is such a strong Italian character that has never been retold, not in a modern or non-historical way. His is an amazing story. They say he was a courageous General with a crazy idea of wanting to go to war in every reachable angle of the world. It really is a powerful story and he’s a great character to get your teeth into.

Let’s talk a little about the film “Perez”, where you not only played the leading role but also produced this film. Was this the first time you put on the producer’s hat?

Yes it was my first time as a producer. I thought that producing would be more about finding money and budgeting to make a film but instead I had to change my thinking. Firstly, because a producer is actually an entrepreneur who works in the cinema industry; secondly it really is a creative job. The producer is the one who guarantees the life of the film, not only economically but also with the story development. It really is a pivotal role.

Now looking at the your performance in the role of “Perez”, which was a very complex and deep character, can you explain how you approached this role?

The very talented director of “Perez”, Edoardo De Angelis came to me with only half a page and after reading it I was already willing to work with him on this project. I’ve always been drawn to stories or roles that are moving and follow a complex journey. I was especially attracted to this role, which portrays a man who has decided to no longer exist. He’s a little lost and melancholic but then something happens which bring back the spark in his eye and the will to come back to reality and fight for his daughter.

On the other hand in the film “Partly Cloudy With Sunny Spells!” you worked with some great comedic actors. What were the highlights of working with such a great ensemble?

Working on this film was a series of laughs, one after anoth- er. First with the director, who’s adorable, then with Lillo who is one of the most famous comedians in Italy and rest of the ensemble. Everyone was dynamic from the beginning, they set the stage for the theme of the film and it was lot of fun. It’s a film totally different to “Perez” and incorporates the themes of lifelong friendships mixed with magical realism. It also tackles the current issues that many Italians are facing now, with the economical crisis but it approaches this theme with a sweet lightness.

Thanks to the assistance of Creative Producer, Edoardo Campanale.