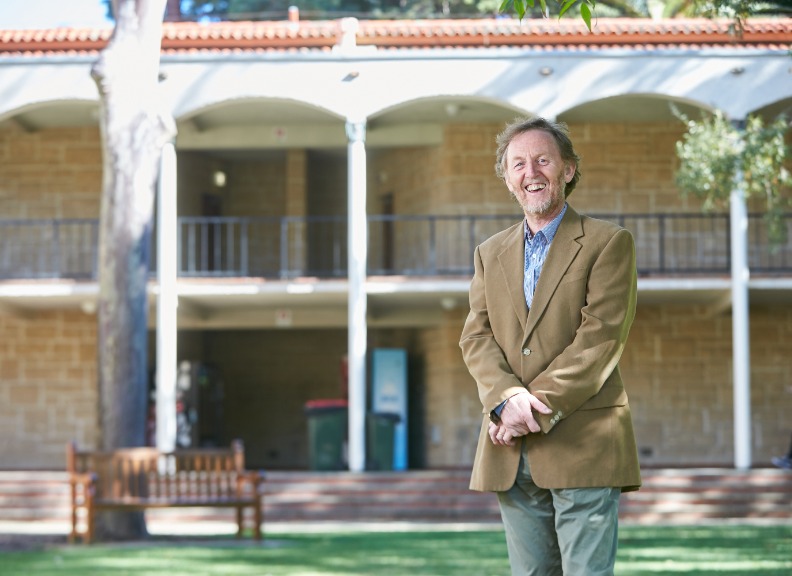 Vanzetti’s perseverance paid off and his legacy continues to live on at the University, which this year celebrated its 90th anniversary of the teaching of Italian language and culture. Today, more than 300 students are enrolled in Italian studies according to Associate Professor and Head of Italian Studies Department, John Kinder.

To commemorate the milestone, Professor Kinder, who has taught Italian at UWA for more than 30 years, ran a series of free public lectures throughout the year. The public lecture series covered a number of topics, from Italy and the invention of luxury, to Catherine de Medici’s hidden cultural legacy, to Pellegrino Artusi’s use of the Italian language and how Vanzetti, an industrial chemist came from Kalgoorlie to teach Italian at the University of Western Australia.

‘The lecture series attracted around 1500 people, which is a sign that Italy and its culture are interesting to a wide-cross section of people’, Professor Kinder says. ‘Highlights were the visit from Italy’s first female ambassador, Francesca Tardioli, a beautiful talk by the Art Gallery of Western Australia’s director Stefano Carboni about the cultural exchange between Christian Venice and Muslim Istanbul, and the history of Italian migration to WA by Professor Loretta Baldassar who combined a deeply personal story of her own family with up-to-the-minute research that uses digital technology to help ageing migrants stay in touch with family around the world.’

Among students that attended the lecture series was 21 year old Grace Walker.

‘Hearing the Italian Ambassador Francesca Tardioli speak was a great privilege and it was wonderful discovering ties between Australia and Italy that I was previously unaware of. I thoroughly enjoyed hearing about topics such as Italy and the Invention of Luxury, Italian-Australian migration and Pellegrino Artusi and his impact on Italian cuisine and the Italian language.’

Walker, who finished her Bachelor of Arts degree in October this year says she was inspired to pursue Italian studies at UWA after taking part in a two month exchange while she was in high school. ‘(On exchange) my passion for the Italian language grew and my appreciation of the culture deepened. I didn’t want that journey to end so studying Italian at university was a no-brainer for me.’

Highlights for Walker during her time studying Italian include units on Italian migration and the history of Italian language, reading Italo Calvino, studying Verdi’s Macbeth and attending this year’s West Australian Opera production as a class, being involved with the UWA Italian club and being taught my Professor Kinder. ‘His breadth of knowledge of the Italian language and culture is just awe-inspiring,’ Walker says.

High-profile Perth-based publicist Dianne Bortoletto has returned to university to complete a Diploma in Italian studies.

‘I have Italian born parents and an Italian passport, but I’ve always wanted to be fluent in proper Italian and not dialect from the 1950’s. I studied it without much success in high school and I’ve done a number of short courses over the years including a few weeks in Bologna; but to master it properly, university was the best option. I didn’t realise I could just do the major units for a diploma in Italian Studies until my sister-in-law announced she had enrolled. I couldn’t sit back and listen to her talk about her Italian studies for the next four years, so I decided to join.’

As part of her studies, Bortoletto took part in an exchange in Bergamo with her sister-in-law. ‘It was an amazing experience to go to university every day and study Italian with students from all over the world. We made some terrific friends and I finally got my head around pronomi – that alone was worth the trip.’

While this year’s celebrations commemorated UWA’s past, Professor Kinder is excited to see what is in store for the future of the Italian department. The beloved Professor has seen plenty of changes during his time at the University,

‘When I arrived at UWA in 1988, very few students had been to Italy, although many students came from Italian families. Now i would say most of our students have been to Italy for study or travel and many of them are in contact with friends and families via social media. Students at UWA take 2-4 units form a different faculty as ‘broadening units.’ This is a very positive change. When I arrived students of Italian were all arts students, now around half of our students of Italian are doing science or commerce. This diversity is good for our classes and it is great to see young Western Australians gaining a professional qualification and language skills as well.’