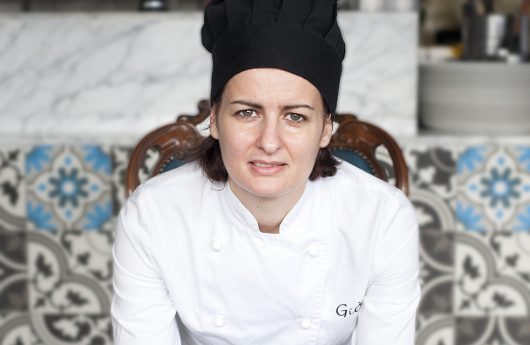 Traditionally in Italy, the craft of pizza making has been the domain of men. No wonder the Italian word “pizzaiolo” only exists in the masculine form. It’s a language practice that needs to be amended because a woman has finally broken into one of the last male bastions with brilliant results.

Her name is Giovanna Alberti and she is a supreme “pizzaiola” and head chef at Woodstock Pizzicheria in East Brunswick. She made news by winning the Australian Pizza Championship 2017 in the Dessert Category.

She kindly agreed to meet me and satisfy my curiosity of her professional background.

Where do you come from?I come from Massa, Tuscany, a small town strategically located between the sea and the mountain, bordering with the Liguria Region. It is rich in culinary traditions and gastronomical resources. Massa expresses all its beauty during the summer and spring months. One day I will go back there!

Being a woman, how has it been for you venturing in the male world of pizza making?After leaving my career as a tennis player, I decided to focus on my family’s business and, together with my brother, I opened a pizzeria in a sports centre owned by my family. We both attended a pizza course in a school where later I became Master Instructor and that helped us to understand the theory and the practical side of pizza making. So, my approach was gradual and I was free to develop my skills without dealing with the prejudice of people. When I moved to Australia my fellow pizza makers were mystified. They told me they had never seen a woman making pizza but, after they saw me in action, they became more reassured.

You are the first woman ever to win an Australian Pizza Championship. Can you give us a hint of what winning has been like for you?Although the quality of a dish does not depend on the chef being male or female, I am very proud, as a woman, to have won the prize. My secrets for winning were: starting from simple ideas, training daily, studying the characteristics of ingredients, trying and trying again combinations developing the best taste and setting up the best design.

You are now living in Australia, having accomplished the dream of your youth. Can you describe to us the most important steps that have brought you here?Five years ago, I arrived in Sydney with the desire to test myself and get a break from the Italian routine. I started searching for a job when I was still in Italy, sending video-CVs showing my skills while working in a pizzeria. In fact, I was able to schedule some trials for different positions. The second day after my arrival I got a job in a pizzeria. After a few months I was sponsored and thanks to this opportunity I became the head chef of a famous eatery in Sydney; then, with the company we opened a second one. In a short period of time the venue was in the top three best pizzerias in Sydney.

Then again, I decided to go back to Italy to attend the Italian Master of Professional Cuisine with the three-star Michelin Chef Niko Romito. After a year and a half of studying and working in Niko Romito’s restaurants in Rivisondoli, Rome, Milan and Milan Expo, I took part in the Pizza World Championship 2016 in Parma, and I received the “Heinz Beck Trophy” special jury prize.

When I came back to Australia I accepted the offer to start up a pizzeria in Sydney, and here I have considered the idea to compete in Australian Pizza Competition and for that I started experimenting new recipes day by day.

At one point you moved from Sydney to Melbourne… why?Although Sydney is my first love, I have seized the occasion of the competition to move in Melbourne with the intention of studying a new market, build new collaborations and enlarge my network.

Any plan for the future?I am working on some projects and I am collaborating with a pizzeria chain in Melbourne. I have many ideas in my head and I am trying to realise all of them with the teamwork. Of course I will keep studying and searching for new styles and techniques in order to stay updated.