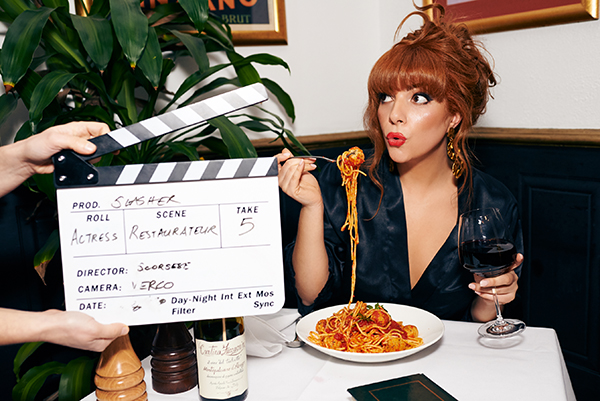 Linda Jean Bruno was once told that if you want to do something well, you have to choose one thing, and stick with it. A piece of advice the actor/restaurateur has firmly rejected. She has found that combining her passion for acting and the management of her family’s restaurant Zia Teresa has been advantageous to both careers.

But how does she do it all? According to Linda Jean, It takes a lot of commitment and perseverance.

‘There was a time when I let people get into my head and convince me that acting is an unstable profession, but I don’t see it that way anymore. Creatively I was missing it.’ Bruno believes that as with any career, there is luck involved, but mostly its hard work and honesty that gets results. ‘In that way, running the restaurant has helped me with my acting business.’ She says.

‘For a long time I tried to keep the two worlds separate’ she says. ‘I thought that if I mentioned that I had a restaurant, people would think I wasn’t committed to acting, that I was unavailable… and vice versa. I wanted my team to know that I was there for them.’

Recently however, Linda Jean has come to recognise the important role the restaurant has played in her career as an actor. ‘I never look at a script and think: I don’t know who this character is. And that’s because I’ve seen so many characters coming through the restaurant. It’s a wonderful lesson in humanity and psychology. I just love people, watching people, establishing relationships and I think that comes from a lifetime of being in hospitality.’

Bruno was recently cast in an Italian-speaking role as immigrant Carmela Colonna in an episode of ABC’s The Doctor Blake Mysteries.

‘I was lucky to work with an amazing female director, Fiona Banks on the episode’, Bruno says, ‘who really cared about the authenticity of the language and who this woman was. I ended up playing her bigger than the way she was written, inspired by all these strong characters that I’ve met in my life. My aunties, and the strength of my Mum and her loving relationship with my Dad.’

When it came to the character’s language, Linda Jean was nervous about the use of dialect. Despite her family’s Calabrian heritage, she explains, standard Italian was always emphasised in their home and she never learnt her family’s regional dialect. Luckily for Linda Jean, her restaurant Zia Teresa is a second home for a large part of Melbourne’s Italian community, with some regular customers remaining loyal for more than 30 years. When preparing the role of Carmela, Linda Jean invited Italian women to the restaurant for linguistic support. ‘I just wanted to converse with them, and pick up some of their mannerisms. What you get is a mix of a lot of different dialects in one performance’, she laughs.

Zia Teresa has been central to Linda Jean’s acting career from very early on. As a child she would give performances in the restaurant, which remains faithful to the actor’s memories of the iconic Lygon St eatery.

‘There had been some changes, but I decided while I was starting to looking after the restaurant, that I missed the idea of what it was when I was little, and I brought it back to its rustic origins. (The restaurant) works really well when we are being true to our origins. People can really sense that honesty and they appreciate it.’

The honesty and humility that Linda Jean speaks of is reflected in Zia Teresa’s mouth-watering menu. Her mother Teresa Bruno, remains, after more than 30 years, ‘the heart of the kitchen’ and specializes in regional rustic cuisine. ‘Everything is seasonal and organic’, Bruno explains. ‘When figs are out of season for the Fichi Imprigionati , we use artichokes.’

The Gnocchi Quattro Formaggi, however, is never out of season, which is lucky for movie star Russell Crowe, who returned to the restaurant recently to order the dish. He remembered it from over twenty years ago, when the movie Proof was shot at Zia Teresa. Just another seemingly serendipitous crossover of the world of film and television with that of the Brunswick East restaurant. Two worlds inhabited by Linda Jean Bruno, who isn’t giving up acting for hospitality, or vice versa, any time soon.