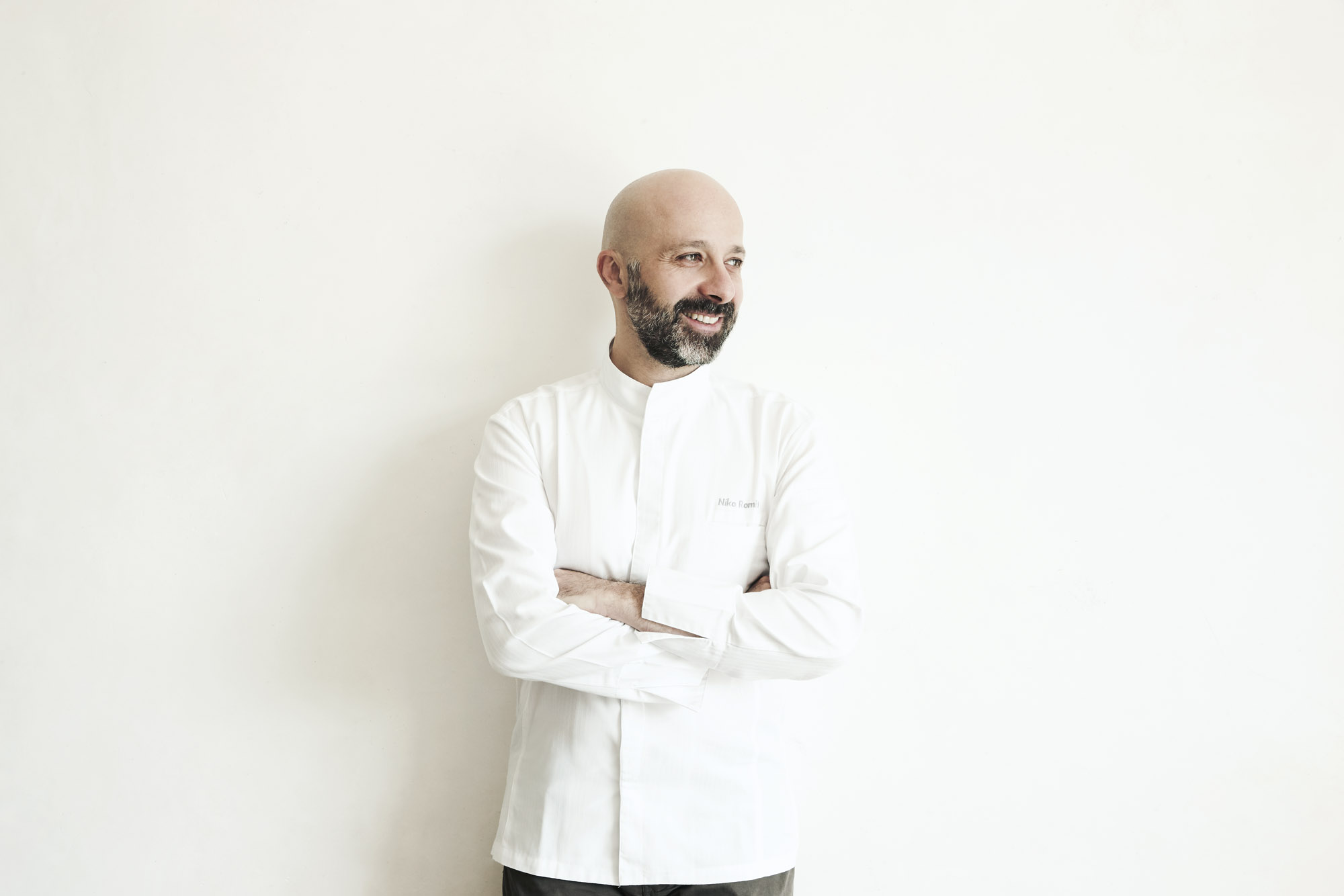 The revolution of simplicity

His cooking style is easily recognizable, healthy and with an explicit focus on the raw materials. For many years Niko Romito has been waiting behind the scenes. But now it's time to step up on the stage, into the spotlight. Segmento has spoken to Italy's allegedly best cook.

Someone says, jokingly, that he has been hiding in the bleak countryside of the Abruzzo region for years. Far from Rome. Far from Milan. And far from other places that might have only a slight resemblance of something urban.

Now, however, the 43-year-old Niko Romito, is no longer able to hide. In the end of 2017 when one of Italy's most renowned guides, the Gambero Rosso Restaurant Guide, was published, Niko Romito, chef at the restaurant Reale in Abruzzo, was appointed as the new King of gastronomy-Italy. He is the chef - as the Italian edition of Vanity Fair has recently written - "that is most likely to bring more fame to the Italian cuisine out in the world".

His story is both fascinating and peculiar. Because there is, objectively, almost a fairy-tale component in what can be told about Niko Romito. Totally self-taught, with a father who was running a pastry shop in Rivisondoli, a small town of the Abruzzi, and a mother who was working as an English teacher, the young Niko moved to Rome to carry on with his university studies in economy. His dream was to become a broker.

The turning point came in 1999 when his father died unexpectedly, at a time when Niko was 25-years-old. In the meantime the pastry shop had been turned into a family trattoria. To finish his economy studies Niko only needed to take another three exams, so he was quite close to the finishing goal. But ... it was all too clear, that the trattoria could not go on without his involvement. What should he do?

Well, he most probably did the right thing. Because instead of becoming just one of thousands economists, he has now been elected the cook that many consider to be Italy's very best.

Every client is a food critic

He accepted the cooking challenge, put aside the economy books and started to put on an apron every single day in the kitchen of the Romito family's trattoria.

"To be quite honest, I was not sure at all that I took the right decision back then. I was sort of driven by an inner instinct", Niko says.

However, this story is definitely a story about a person with an extraordinary talent, which is discovered by pure chance. Driven by his new challenge Niko starts to visit different restaurants as often as possible. He wanted to see how other restaurants did, how they were organized. And he starts participating in cooking stages and courses, and very slowly he begins to elaborate, mentally, the cuisine that he would like to strive for.

One of his stages takes place at the restaurant Da Caino in the small Tuscan town. After that stage, Niko says to himself: "If they manage to work and have a high level cuisine in such a small town, I'm able to manage too in Abruzzo".

The story about the old family trattoria is long a closed chapter. But the family is still part of Niko Romito's uprising career, since he has always been working shoulder to shoulder with his sister Cristina, who is now the general manager of Reale.

Today the home to Niko Romito's gastronomic genius is called Casadonna, an old convent built in the 16. Century and sited near the small Abruzzi town of Castel di Sangro. The place actually resembles a true head quarter, since many different activities can be found here. You'll find a small so-called hotel di charme with a total of nine elegant and minimalistic suites, a culinary laboratory and a highly praised cooking school where classes of a maximum of 15 young cooks are being trained. In that way Niko also provides for the gastronomic education, that he himself did not get in the beginning of his career.

Casadonna is also the place where Niko has celebrated his biggest gastronomic victories - from when he in 2005 was elected "Young chef of the year" by the Espresso-guide, and further on to the years 2007, 2009 and 2014 - the three years in which he has received his three Michelin stars.

There is a lot of talking going on as regards the much sought after Michelin stars. Did it change anything to Niko when he received the last of the three stars:

"Well, actually it did. It changed many things, for me and for the whole team. The three Michelin stars is probably the highest goal for a cook that has a background like mine. And then it's also an international recognition. As a matter of fact, after the third Michelin star we have noticed that we are receiving more clients from abroad, because Reale has be inserted onto Italy's gastronomic map.

And what about his kitchen? If you ask himself, he describes it as "easily recognizable, healthy and with an explicit focus on the ingredients", and when asked specifically about which key words he believes to be the most important in his kitchen, he says: "Concreteness and the capacity to keep your feet on the ground. In this case concreteness means that I'm trying to have a genuine focus on the ingredients. Sometimes I actually try to extract taste from a certain ingredient, just to add that taste onto the very same ingredient a moment later. So in a certain way, I impoverish the ingredient only to make it more rich afterwards".

Some food critics add that his style is surprisingly simple, as they speak about "Niko Romito's revolution of simplicity". This food revolution is only possible due to a knowledge that is so profound that it allows him to make experiments - to extract the purest possible taste - that only a few before him has done.

Well, if you want to see an fascinating example of Niko's revolution of semplicity - which is actually extremely sophisticated - all you have to do is to visit Reale's home site to see what he manages to do with a savoy cabbage in order to extract the purest taste. The "poor" cabbage is being burnt in the open fire. Then, with white wine-vinegar, salt and water, it's set to mature for seven days. After that period it undergoes a steam cooking procedure and then another 3-4 different passages. In the end of this sophisticated process it's mixed with star anise and served with a crème of potatoes, olive oil and a rosemary extract in what most of all seems to be a true work of art, science and dexterity.

Not surprisingly Niko says: "Of course our clients usually don't know about the work and the elaboration that can be behind in a dish. The research that has been done to extract an intense flavor from a certain ingredient. They don't know, and that is perfectly understandable. But if they knew, I think that many of them would be really surprised".

All power to the Abruzzi

Niko Romito is definitely a follower of the principle of "chilometro zero", dear to many Italians kitchen chefs. This means that the food has to be local and that transportation therefore has to be cut down to an absolute minimum. Of that reason many of Reale's suppliers are local farmers. Actually, this principle is even applied even when it comes to the wines in the restaurant's cantina.

"Our selection of wines from the Abruzzo region is quite good. We don't only look for local wines, but at the same time we also aim at a constant renewal of wines from our region. It goes without saying that we always focus on top quality wines", Niko explains.

And speaking about wines, in the Reale's wine cellar is definitely worth a visit. It's located in a part of Casadonna that used to be a stable. Here, among the original drinking troughs from several centuries ago, you'll find something like 7,000 bottles of more than 500 different labels, mainly from Italy and Europe. The bottles are entrusted to Gianni Sinesi, the sommelier who has been with Cristiana and Niko Romito since 2004. The wine selection method marries the Reale's cooking philosophy, with an emphasis on cleanliness and pleasure, and the search for a marked drinkability even in younger labels. A network of relationships connected with small quality producers allows Gianni to place alongside the big labels even less known but interesting bottles.

Well, after his recent "coronation" as King of food-Italy, Niko is no longer able to hide. The Abruzzo region has put Casadonna on their tourist map of places that you have to visit when you go to the region. Luckily, Niko himself has not been ruined by success. He looks seriously upon food critics and says: "As a high level restaurant you can't please everyone, and actually you shouldn't try to please everyone. Because if you practice an avant-garde cuisine like ours, not everyone is able to understand you. Still, you have to accept you clients. And you have to accept everyone of them, because at the end of the meal, they are all food critics".