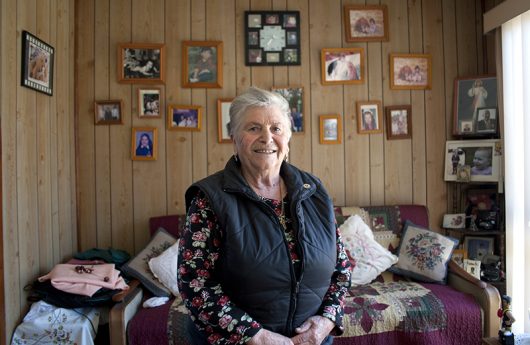 The Nonna that has conquered the web

Her Facebook page has nearly 300,000 followers from all over the world; her videos on Youtube are widely clicked: she is known as the web’s best ever Nonna. She’s a little over a metre tall and 80 years old but her smile and charisma are explosive. So is her attitude to certain things; tattoos is one, she hates them.

She speaks English with a strong Italian-Calabrian accent that has charmed so many followers. The way she deals with the new technology or how she argues with her son Greg that people ought to go to the “Festa della Madonna” rather than to a rock concert, beguile her followers who wait with great anticipation for her next video post.

She is a star on the web and has become the Nonna of everyone. Paola, better known as Nonna Paola, was born in Calabria in a small town called Bianco. She was very young when her mum passed away. She grew up with her strict and austere father, her three brothers and her lovely Nonna who taught her to sew.

When she was nineteem, after a hard childhood spent in the farm helping the family, she decided to join her brother in Australia, the land of opportunities, where she became a dressmaker.

“I came here by ship, the big one,” says Nonna Paola sitting in her living room with a cup of coffee. “My brother had promised me to his friend. In those days that was the way people got married but I didn’t agree and after a few months I met my love.”

“It was love at first sight,” she tells me looking at her husband’s picture. “He sat next to me on the tram and he looked at me and said ‘I like you’. After a few months, we got married and we left for our honeymoon in a taxi that drove us to St. Kilda because we didn’t have money to go any further at that time. We had three children and the last one, Greg, drives me crazy and he makes me sick with these tatoos,” says Nonna Paola, putting her hands on her face.

Yet it’s thanks to her son Greg that she has become so popular. In fact, he is the creator of the many videos that have attracted so many Internet followers. Nonna Paola doesn’t understand what social media and Internet are, she doesn’t even have a mobile phone but, as she says, “sometimes I just walk up the street and people stop me and ask me ‘Are you Nonna Paola?’”

“Seeing these happy people when they meet me fills me with joy,” she tells me. Not many people know that Nonna Paola’s life was not all a bed of roses. “I lost my husband in 1990 to an illness and after only three months my son in law was killed in a tragic accident in Maribyrnong. My family was devastated but I tried to go on with a smile, this is my strength.”

“I have entrusted myself to the Lord and I believe I have a mission, that is of making people happy. That’s why I’ve been going to nursing home for eighteen years to keep company with the elderly people living there, singing with them, dancing with them, no matter their nationality. Every time I say to the nurse: bring all in. I love to make them happy and when I go home I am happy as well.”

Nonna Paola has been a guest on numerous TV and radio shows but what she really likes doing is appearing at charity events as an ambassador to help raise funds for cancer patients.