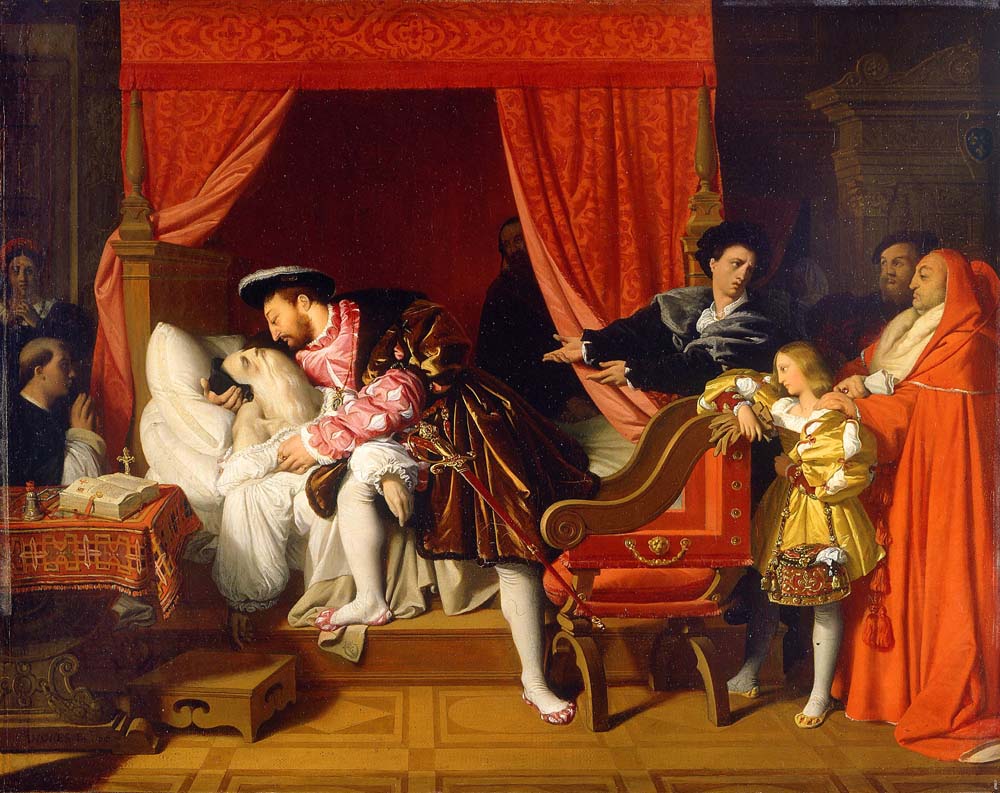 The facetious and unproven facts about Leonardo Da Vinci's life

Leonardo da Vinci. The artist, scientist, architect, botanist, writer, historian, cartographer, inventor, in other words, the original ‘Renaissance Man’, is one of Italy’s most beloved historical figures, and this May marks 500 years since he died, reportedly wrapped in the embrace of the King of France. (Image - The Death of Leonardo da Vinci by the French artist Jean Auguste Dominique Ingres. The painting is showing Leonardo da Vinci dying, with Francis I of France holding his head)

In preparing this article, I’ve been down a da Vinci rabbit hole. What to say about such a revered figure? I should have known that it would be counter-productive to attempt to ‘brush up’ my knowledge. The books, films and articles are endless.

As Dan Brown famously (and profitably) perceived, Leonardo’s life and work lends itself to fiction, partly because of the mystery surrounding it all. 500 years is a long time. It’s not surprising that there is much we don’t really know about Leonardo da Vinci, and lots we’ve made up to fill in the gaps. Historians have pieced together everything we do know from letters and journals, but it turns out Leonardo didn’t document his life on Instagram or ‘check-in’ at his favourite taverns, so there were periods of the artist’s life in which not even his whereabouts is known.

So loved was da Vinci during his lifetime, that apparently the King of France, Francis I, lost no time in (literally) scooping him up after the murder of the artist’s patron Giuliano de’ Medici.

That Leonardo died in the arms of Francis I is, of course, one of the many unverified Leonardo ‘facts’, probably reinforced through the image of the artist’s deathbed, depicted in the 1818 painting, ‘The Death of Leonardo da Vinci’ by Jean Auguste Dominique Ingres.

Another point of uncertainty are the polymath’s remains. You can visit Leonardo’s tomb in the chapel of Saint-Huburt in Amboise, France, but the remains are only presumed to be those of the great painter (there’s a disclaimer in the form of a bronze plaque on the wall behind the tomb). While there’s a chance it could be anyone in there, soon we will know for sure. As I write this, Italian scientists are comparing DNA from the tomb to a lock of hair and DNA samples from da Vinci descendants. Another mystery soon to be solved!

Famously, da Vinci is thought to have been a vegetarian, possibly even vegan. This idea probably came from the writings of the explorer Andrea Corsali, who like Leonardo, was a beneficiary of the Medicis. When Corsali came into contact with the Hindu faith, he wrote to Giuliano de’ Medici:

‘Certain infidels called Guzzarati are so gentle that they do not feed on anything which has blood, nor will they allow anyone to hurt any living thing, like our Leonardo da Vinci.’

How could Corsali have known that from that one sentence, he would create a vegan icon?

A letter from da Vinci requesting patronage from the Duke of Milan was put under scrutiny by professional recruiters. While the letter was praised for not including crazy fonts and images, it was still considered ‘a little too simplistic.’ Suggestions included ‘a little more white space for the eye’ and ‘some font variation, headlines and categorisation.’


Interestingly, in this same letter, Leonardo claimed to have the ‘methods for destroying every fortress or other stranglehold, unless it has been founded upon a rock.’

Now that’s a skill that today’s artists are fortunate not to have to include in their grant applications.

There are a few facetious examples like this, where Leonardo’s life is juxtaposed with the contemporary context from which we view his work now. Perhaps it is because while every-day life during the renaissance is unfathomable to us, the work that Leonardo created in that time is still extraordinarily relevant today.

Drawings and notes on bridges, the parachute, the helicopter, armoured cars, guns, and drainage systems have all been found in his notebooks, among many other things. In the 1970s, a drawing of a bicycle was discovered on pages of a notebook previously glued together, surrounded by drawings of penises. Italians everywhere were disappointed to learn that the bicycle drawing did not date back to Leonardo’s time, so the bicycle was probably not his invention. The penises, however, do seem to be authentic, and may be the first record of what was to become a traditional classroom decoration! Who knows why a bigger deal wasn’t made of it at the time?

Apart from this, Leonardo of course actually studied human anatomy by dissecting cadavers and creating the first anatomical studies and diagrams of internal organs.


Drawing was always at the centre of his work and will largely feature in the various exhibitions organised worldwide to celebrate the 500th anniversary of his death, as well as some paintings and complete codices.

One of the largest collections of Leonardo’s drawings is part of the United Kingdom’s Royal Collection, acquired by King Charles II around 1670. It contains more than 550 sheets that have been kept together since Leonardo’s death.

In the United Kingdom, Leonardo’s anniversary celebrations began with twelve museums hosting parallel exhibitions of Leonardo’s drawings across the country until the 6th May. All of these drawings were then brought together in a large exhibition of Leonardo’s works at The Queen’s Gallery in London that will be open from 24th May until 13th October.

In October, at the Uffizi Galleries of Florence, the anniversary will be celebrated with the exhibition ‘The Leicester Codex of Leonardo da Vinci: Water as Microscope of Nature.’  The work discusses the movement of water, fossils, and moonlight, and is being loaned by Bill Gates, who purchased it in 1990.

In Turin, the Biblioteca Reale is exhibiting the famous self-portrait of Leonardo, accompanied by drawings from the Italian Renaissance called ‘Intorno a Leonardo, Disegni Italiani del Rinascimento,’ The library is also creating a permanent display of the thirteen Leonardo drawings they own, in addition to the Codex of the Flight of Birds.

In Milan a pavilion at the Borsa Internazionale del Turismo is showing Leonardo's works contributed from the Sforzesco Castle, the Museum of the Vinciano Cenacolo, the Ambrosiana Library and Art Gallery, the da Vinci National museum of Science and Technology and the Stelline Foundation.

Apart from the celebrations at any of these outstanding cultural institutions, there are many ways to remember Italy’s most famous polymath on the 500th anniversary of his passing. Think of him next time you cross a bridge, go para-sailing, sink your teeth into a vegie burger or… doodle in a notebook.