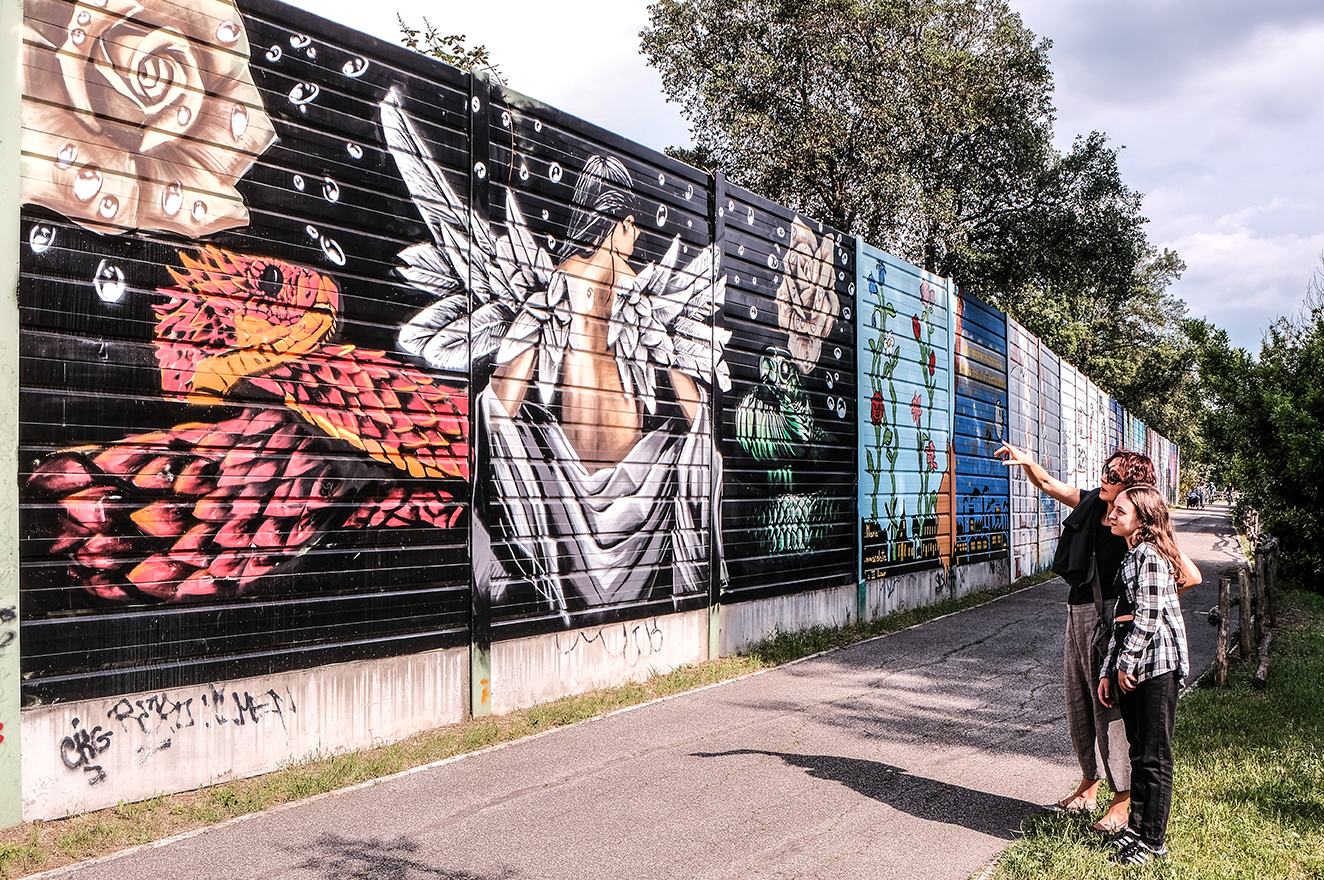 120 artists have created 99 murals that have a total length of 1,260 metres, second only to the Berlin Wall. The Art Mile, inaugurated in May this year, in the Roman district of Torraccia, is an explosion of beauty and an example of how public spaces can be turned into surprising works of art. Segmento went to visit an unknown Roman area which is way out of the city’s centre, and definitely way "out of the ordinary". (Photos: Jesper Storgaard Jensen )

In today's Rome - tormented by what seems to be an unstoppable decay - it is particularly pleasing to see the birth of projects that try to bring the city closer to new forms of beauty, the regeneration of abandoned areas together with the aggregation of communities around art.

This is exactly what happened in May this year, when quite an extraordinary art project, The Mile Art, was inaugurated in the presence of Rome’s Mayor, Virginia Raggi. This extraordinary project is located in the Torraccia/San Basilio-district, in the northeastern part of the Italian capital, close to the city’s huge ring road. The promoter is the cultural association Arte e Città a Colori (Art and Colourful Cities). We went to talk to its President, Francesco Galvano, to find out more about this project.

On arrival in Torraccia, a neighborhood built at the end of the 1980s, the importance of having created a work so full of light and life becomes abundantly clear. This suburban neighborhood really seems to be on the edge of reality, with rows of anonymous public housing and many social problems. But now it has an attraction that draws in both Roman and non-Roman visitors and that has forever torn it away – anyway, so it seems – from grayness and anonymity.

I approach the beginning of the area. Here there is a sign with the words - "Welcome to the Art Mile - 99 murals and 120 artists for an Open Air Museum" – that welcomes me, together with Francesco Galvano.

The first impact is considerable and leaves you incredulous. The panels are about four metres high and 2.7 metres wide. There are about a hundred of them, divided into different sections. In all, they measure 1,260 metres. "After the Berlin Wall, which surpasses the Art Mile by just 40 meters, this is Europe's longest work of art," Francesco tells me, understandably proud.

As we start our walk, Francesco starts to recount: "The idea of this project came to me about three years ago, when some local people asked me: "why don't we try to use the noise barrier to do a street art project”? The anti-noise barrier was placed at the end of the Torraccia district to cushion the hubbub of traffic from the ring road", Francesco explains and goes on.

"The idea was good, but it really seemed like a mission impossible. Our association works to find large spaces where intervention is required, to change the appearance of a neighbourhood, obviously to make it more beautiful and civilised. I knew, therefore, more or less what needed to be done, and right from the start I knew that there were so many things that needed to be sorted out”, he says.

It’s hard to disagree with him when you take a look around. Many years ago, in the 1930s, San Basilio was one of the first villages to be born, when many families in the centre of Rome were forcibly moved to the suburbs to make room for the construction of new central roads. The former well-known urban planner, Paolo Berdini, called the new suburbs "distant suburbs", while writer and filmmaker Pier Paolo Pasolini was much less diplomatic, defining San Basilio simply "a concentration camp for Rome’s poor people".

"With a small group of locals and with the fundamental support of the so-called Retake Group Torraccia (Retake is a non-profit organization in Rome that works on various regeneration projects, ed.), we began to clean up the whole area. The grass was growing wild and was quite high. Then we had to send away shady characters who were dealing drugs. It was only a year later, when the area had been suitably cleared, that we were able to start the core project”, explains Francesco.

Today the lawns nicely manicured, the plants are pruned, the benches have been painted and young trees stand side by side with the older ones.

Together with Francesco I move on as I contemplate the many art works. You really need to pause every ten steps or so to take in all the detail from each individual  piece of work. One of the first murals depicts Don Luigi De Liegro, founder of Caritas (Italian organization of emergency aid, ed.), who died in 1997, accompanied by the words "Love and share". He is followed by Little Red Riding Hood who hugs a frightened wolf, two teenagers on the beach saying "I like you", the judges Borsellino and Falcone, who were killed by the mafia and Peppino Impastato, who met the same fate. It is indeed a colourful experience, full of meaning and important civil and social values.

"You will surely see many well-known personalities, painted to highlight some of the themes covered throughout the work: here we pay tribute to nature and the environment, we defend the most socially marginalized classes and we also say no to violence against women".

The project was brought about from a choral work: 120 artists were involved - some well-known street artists, together with artists that are totally unknown to the general public, as well as local school youngsters. Even foreign artists have participated, e.g. from Venezuela, USA and the Philippines.

Everyone worked without receiving any remuneration. The materials were paid with crowdfunding which the local people organised.

The murals are full of human and pedagogical messages: two stylised children are accompanied by the phrase "Don't compare children to each other, you can't compare the sun and the moon, they shine when it's the right time".

In front of all this beauty I immediately feel concerned. How do you protect yourself from the notorious Roman writers, those who are signaling their passage with not always artistic and often vandalistic tendencies?

“Well, before starting the project we identified the signatures of the local writers, and we contacted them in order to involve them in the project. And they accepted happily. In doing so we motivated them to safeguard the murals. I hope it will work", says Francesco.

To understand the stories behind each of the 99 murals you could easily spend an entire day in Torraccia. I ask Francesco about some artworks, including one that depicts a teenage boy standing among the stones, with the sea behind him. Francesco tells me:

"Among the murals there is one in particular with quite a special story. This is the case of Federico, a boy who died of fulminant meningitis earlier this year. He was 15 years old. His mother had asked me to dedicate a mural to him and of course we wanted to fulfil her wish. The artist is called foko 127. He is a policeman who is an artist in his spare time. Look ... he also quoted a small part of an Eros Ramozzoti-song, "From the Other Part of the Infinite", which Federico liked very much. Her mother told me that since this mural has been there, she no longer goes to the cemetery. She prefers to come here, to be with her son", Francesco tells me.

I take a good look at that image which is accompanied by Ramazzotti's words: "Nothing has passed, nothing is over, you have only slipped into the other side, to the infinity, we’ll meet again, where the horizon meets the open sea".

Francesco Galvano is rightly aware of how aesthetics have embraced a powerful symbolism in the Art Mile. Yet he doesn't rest on his laurels. "We have a new project in the pipeline," he adds, "that is, to put a plaque under each work, with the artist's name and a brief explanation of the meaning of the work itself. Having this information would enrich the mural itself. Then my dream is to organise guided tours. Only this way will it be possible to fully enjoy this amazing work”.

Another plan for the future is to create periodic cultural events in this area. It used to be "a concentration camp for the poor", but today, instead, it seems like a small corner of Switzerland, where every colour tells a story of its own.