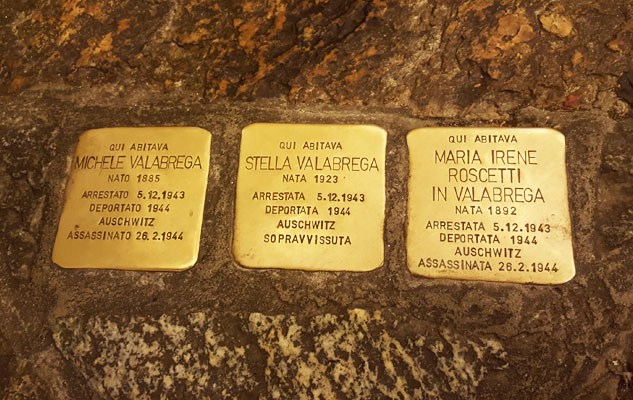 Wandering through the streets of an Italian city, a contemporary visitor may occasionally come upon small golden tiles, set into the pavement and each inscribed with a name and several dates and details (‘arrested on’ and ‘deported from’) explaining the fate of someone who once lived in the given location. (Often the following words include ‘assassinated’ or ‘killed in Auschwitz’). (Photo: Stumbling stones in Turin) - Source: guidatorino.com

In the last nine years, these tiles – known as pietre d’inciampo or stumbling stones – have sprung up across Italy as part of a Europe-wide project to remember victims of the Holocaust and Nazi deportation. First installed in Rome in January 2010, as part of the Giorno della Memoria (Day of Remembrance) on the 27th of that month, the pietre have spread to most major cities, along with many provincial capitals and small towns, with a total of 983 present throughout the country. In addition, their numbers are often augmented as more names and stories become known, in a process of almost continual remembrance of those lost during World War II.

The stumbling stones are not unique to Italy: they are in fact the brainchild of German artist Gunter Demnig, who began installing them – firstly in Kreuzberg, Berlin in 1996 - as a way of commemorating ordinary people captured and deported throughout Europe, and reminding others of their connection to the modern landscape. For Demnig, the latter point is crucial: he says that by placing a stumbling stone (Stolpersteine in German) in front of a building where a deportee once lived brings back the memory of that person connected to the place itself. (To quote the Talmud, ‘a person is only forgotten when his or her name is forgotten’). However, the prevalence of pietre d’inciampo links Italy to not only this particular global project, but to a global pattern of Holocaust and wartime commemoration which has been on the increase since the last decade of the twentieth century, influenced by films such as “Schindler’s List” and Roberto Benigni’s “Life is Beautiful”, and accompanied by increasingly innovative forms of commemoration seen in museums and on the streets and piazzas of cities around the world, from Washington to Milan.

In March 2000, this commemorative culture became institutionalised in Italy through the passing of a law which fixed the 27th of January as an annual day for remembering Holocaust victims, Italian political deportees, and those who helped victims of Nazi-Fascist terror. The law stipulated that a focal point for this Giorno (sometimes Giornata) della Memoria would be the involvement of schools and students in events organised by local communities, ensuring that commemorative activities would retain an element of learning about the past and the messages it can convey.

However, Italy’s culture of remembrance (particularly in relation to the war and the Holocaust) has roots that are both longer and more complex than this institutionalisation of commemoration would suggest. In his recent book on the topic, historian Robert Gordon points out that the country has produced ‘striking clusters of writers and filmmakers, artists and architects, historians and intellectuals intent on coming to terms with the phenomenon of the Holocaust’, with many of these – including Primo Levi, Giorgio Bassani, Natalia Ginsburg and Vittorio De Sica – counting among the most prominent in the field. Equally, Italy’s multi-varied experience of the war, an experience which includes Fascism, civil war, partisanship and deportation, ensures that there is a constant question of what will be remembered, and how. (In this regard, historian Michele Sarfatti has written of how Italy’s institutionalisation of memory-days expands well beyond the Giorno della Memoria, given the celebration since 1946 of the Festa della Liberazione on 25th April, and the more recently-introduced Giorno del Ricordo on 10th February, which commemorates Italian killed or exiled from the Istrian-Dalmatian border region during the war.)

Nevertheless, as the push to remember and discuss the war continues to grow, various institutions and entities across Italy have pursued increasingly innovative and story-centred methods to do so. Perhaps one of the foremost among these is the Museo Diffuso in Turin, whose permanent display ‘illustrates everyday life during the war, German occupation, the Italian Resistance and the return of democracy, through the images, the sounds and the voices of witnesses presented in multimedia installations.’ Director of the Piemontese Institute for the History of the Resistance and Contemporary Society (ISTORETO) Luciano Boccalatte said the groundwork for the museum’s development was laid in the 1970s and 80s, when Franco Antonicelli and Giorgio Agosti – both wartime anti-fascists associated with the ISTORETO - managed to have one section of the Museum of the Novecento dedicated specifically to the years 1918-1945. ‘It was then the only way to bring the Resistance into museums, given the almost absence of museum structures dedicated to the Resistance in Italy, even if the concept of Resistance as the second Risorgimento already existed at that time,’ Professor Boccalatte said.

Twenty years later, an opportunity to open a museum specifically dedicated to this theme arose when city authorities handed over a former army-barracks building to ISTORETO and the National Cinematic Archive of the Resistance. Boccalatte said that from the very beginning, there was an emphasis on connecting the city’s wartime history to local sites. ‘Influenced by the extensive discussion provoked by the work of (historian) Pierre Nora in his book, Les Lieux de Mémoire, it was felt that the idea of telling the story of the city in the period from 1938 to 1948 starting from modern locations - and making the history emerge through documentation and testimonies of the location’s history - seemed to us the only way of narrating after almost three generations since the war,’ he said.

‘The Museo Diffuso was undoubtedly the first in Italy to use a completely virtual and digital approach to reveal the history of the places where different themes and historiographic nodes of that period cross.’ Thus, a visitor to the museum encounters representations of life during the war years, the German occupation, the Resistance movement and the return to normal life in the post-war years, guided by written, oral, photographic and cinematic sources. And as with the pietre d’inciampo, the stories of ordinary people in these places come through most prominently.