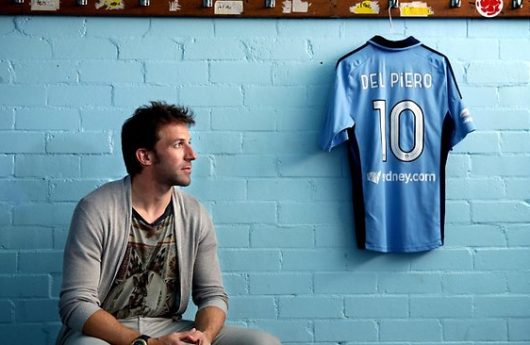 Is the next Del Piero among our kids?

In recent years, European football seemed to realize the big potential of Australia in terms of future growth and revenue. In 2012 the choice of an icon such as Alessandro Del Piero to join the A-League with Sydney FC reached a milestone for Australian soccer, which has started to be followed beyond the national borders, too.

Unlike the other clubs joining the competition, the visit of Juventus FC, is part of a wider project that has made Melbourne the centre of Bianconeri’s future activities in the whole Australasia region. In 2012, in fact, a partnership among Juventus FC, Brimbank Stallions Football Club and Sunshine’s “Club Italia” Sporting Club has been launched with the aim of creating the first official Juventus Academy in Melbourne. The project, first born in the form of School Holiday Camps, has grown to the point that Juventus FC has decided to send to Club Italia four coaches from their Italian Juventus Camps in order to follow the progress of the enrolled players.

We are speaking of an ambitious project here, which has seen Juventus FC creating the first and only Juventus Academy in the whole Australasia region out of the 22 that are currently scattered throughout the world. Carlo Mastellone, Juventus Area Manager for Oceania, carries out periodic visits in Melbourne in order to ensure that the program is faithful to the guidelines of the agreement signed between Club Italia and the “Bianconeri” club. The coaches themselves draft some reports to send to Turin with the aim of monitoring the progress of the young members, too.

The choice of hosting the Juventus Academy at Brimbank Stallions’ home Club Italia was not a coincidence. Worldwide, Juventus FC selects only structures with very high quality standards and the Club Italia Sporting Club of North Sunshine is a showpiece among Melbourne soccer schools. The Club has two full-size FIFA standard pitches plus two training grounds. In 2009 more than $200,000 was spent to drought-proof the facilities. A scheduled maintenance program ensures the highest possible quality standards and an approval has already been given to work on a synthetic pitch due for completion in 2017.

Currently, the partnership between Brimbank Stallions and Juventus FC counts about 250 enrolled members, divided into age groups from 7 to 16 years. The Senior Team plays in Division IV and at the time of writing is leading the board by a wide margin.

Juventus Academy soccer program takes place every year in February and it has been set up to develop participants’ skills through the Juventus training method – applied according to the age and level of the players. The cost of the annual registration is $925 for Under 11 to under 16 classes and $725 for Under 7, Under 8, Under 9 and Under 10 ones, inclusive of training and playing uniforms.

Not many people know that Brimbank Stallions have a great success story among their kids. The 19 year-old Mathew Leckie, who was a regular with the Socceroos team, currently plays for FC Ingolstadt in the German Bundesliga and is considered one of the rising stars of Australian soccer. Perhaps your kid is the next Del Piero!