No items found.
Product is not available in this quantity.
LoginLogoutSubscribe
Business people 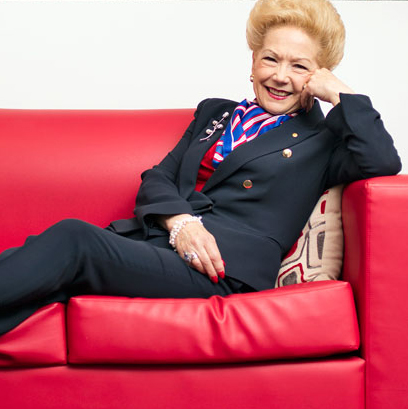 Melbourne businesswoman and philanthropist Susan Alberti is not Italian, but she delights in being mistaken for a native speaker. ‘I feel good when I speak in Italian and they respond, and they think I’m Italian. That’s how you know you’re doing it right’, she says.

Susan learnt the language from her late husband Angelo Alberti, an Italian migrant who arrived in Melbourne at the age of 19.

‘Smart, kind, firey, patriotic, and a great provider’, is how Susan describes Angelo. She tells of his arrival in Australia, the way he ‘worked like a dog’ as a tradesman, and eventually, after losing an eye in horrific work accident, became an entrepreneur. Susan worked side by side with her late husband until he was killed in a road accident in 1995.

That’s when Susan took over their business entirely, and became responsible for over 300 employees. As far as business goes, there’s only one way to do it, according to Susan: The Italian way. ‘We’ve always treated our employees like family’, she says. ‘It works. My door is always open. If there’s a problem, my employees come and see me. We’re Team players. I’m only as good as the team around me.’

Susan has known immense tragedy. In 2001, she lost her daughter Danielle to complications from her type 1 diabetes diagnosis, the disease to which her philanthropy is now largely directed.  Susan now chairs the Susan Alberti Medical Research Foundation, dedicated to fundraising for health awareness and medical research.

Her other passion is AFL. Former vice-president of the Western Bulldogs, Susan is known for her generous contributions providing opportunities for women in the sport. To Susan, these passions are interconnected. ‘Women represented in sport means that little girls are turning up to games with their favourite female player’s number on their backs’, She explains. ‘Girls are training alongside boys at Aus-kick, and we are seeing more families at the stadium.’ This is all part of Susan’s plan, as she is concerned by the number of children in Melbourne who are suffering from obesity, a dangerous precursor to type 2 diabetes, different from the disease Danielle suffered from, Susan explains, but also a serious health issue. She makes clear that her aim is to see equality in sport rise, not through force, but through education, where men and women’s teams compliment each other, and everyone benefits.

So how has Susan managed as a woman in the male-dominated worlds of finance, business and sport? Her inspiration comes from an unlikely role model. Angelo’s mother Giorgia immigrated to Australia from Friuli after Susan and Angelo were married, and Susan formed a warm and lasting relationship with her mother-in-law. Giorgia was, as Susan puts it, a born businesswoman and entrepreneurial spirit, surviving as a widow in post-war Italy by growing vegetables to barter within the village and feed her three children.

Susan, when reflecting on her embracing of the Italian culture, (including the mastering of a mean ravioli con ragù!), credits her relationship with Giorgia. ‘It was about my desire to say “Welcome to Australia”, she says. Impressed by her family’s efforts to assimilate (Angelo became an Australian citizen months after their marriage), Susan felt that it was up to her to reciprocate, adapting aspects of the Italian culture and making them a part of her way of life.

Nowadays she has numerous trips to Italy under her belt, and says she has always felt at home in her adopted country. Back home she remains a part of the Italian community, speaking at various functions and enjoying any opportunity to practice her language skills, now that her main confidante, Giorgia, has passed away. ‘At these events I’ll get talking to people, like the musician from the band, and they’ll ask, “Sei Italiana?”’, Susan recounts. Her response sums up her relationship with Italy.  ‘I’m proud to say “No I’m not, but I speak your language. And I love your country.”’