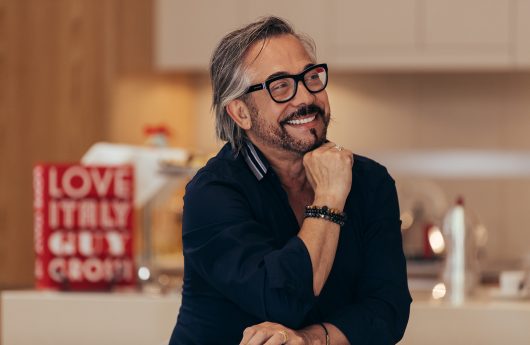 If will, passion and vision are there ... the inspiring story of Alfredo Santo

A lot has been written about post-war immigrants and their quest to build a new life in an unfamiliar and remote land as Australia still was in the middle of the last century. Little account has been given of their children’s experiences as they grew up torn between two cultures, wrestling with society’s push to mainstream or marginalize them.

The multi-awarded hairstylist, Alfredo Santo, has gone through that experience with the added strain of becoming aware into his teenage years that he was gay. He was born in 1953 in the Victorian country town of Koo Wee Rup, the youngest of five children of Francesco and Vincenza Santo, a couple from Sicily who worked as market gardeners.

“Growing up in the country,” Alfredo recounts, “was hard in those times as Italian immigrants were kind of seen as inferior. We were often called wogs, dagoes and spaghetti munchers. This made settling very difficult and, as a child, I yearned to escape the countryside and fit in with a cosmopolitan lifestyle in a big city.”

In the early 1950’s, many Italian families settled in Koo Wee Rup, the South Gippsland area. They helped make it a thriving rural district, but for Alfredo it was not an adequate place upon which he could build his aspirations and identity. “There was definitely this growing sense that I was different. I wanted a creative career and I was prepared to face any sacrifice to get it.”

Grappling with their own frustrations over the acculturation process, many children of immigrants found themselves enmeshed in a critical tangle: battling parents over the venerable traditions of their native cultures while simultaneously risking a break with their cultural background.

While his push to mainstream to “Australianise”—and his persistent inner turmoil with it—was not unique, in Alfredo’s case it was accompanied by an absolute determination to excel in whatever career he chose to embrace. The only downside was that he could not convey to his parents the scope of his yearnings, the intricate nuances of his path: “We didn’t really have that kind of relationship where you open up and tell your parents all about yourself and your dreams.”

“You have to internalize a lot of it,” Alfredo says, “because the expectation is that you should conform to the conventional pattern and be realistic in what you can achieve.” When he completed high school his parents encouraged him to become an accountant deemed back then to be a successful and lucrative career path. After twelve months of accounting which allowed him to move to Melbourne, he soon realised this was not his dream. In 1976, he decided to pursue his passion for hairdressing. He enrolled at Venus College of Hairdressing and worked evenings and weekends as a waiter to pay his way. He successfully completed his diploma course as a hairdresser and travelled to Europe to widen his experience in this field, and was selected to work in one of the top salons in London.

After a twelve month stay in London, his ambition to run his own business in Melbourne drew him back to Australia. His return marked the beginning of a splendid career with the opening of a high-end salon in Toorak, making him famous and known as one of the most brilliant and creative Australian hairstylists. This salon allowed him to explore all avenues with this profession, including doing makeovers on TV shows, writing articles for several magazines and supplying images of his hairdressing creations based on the total look, to inspire the general public and his professional peers.

His Toorak salon was an outstanding success, employing over twenty staff and gaining him many awards; from “Victorian and Australian Hairdresser of the Year,” to “Best Salon design in Australia” and “Best Marketing Salon in Australia.” Among these incredible recognitions, Alfredo was inducted into the Australian Hairdressing Legends “Hall Of Fame.”

Seven years ago, after thirty-five years in business, an opportunity arose for a healthy sale of his successful salon. Alfredo has since been cultivating his Italian heritage through many trips back to the Bel Paese. He now divides his time between Australia and Italy, where he has bought an apartment in Umbria with his partner of eighteen years, Brian Reberger; a well-respected Australian artist who has a special connection with Italy and derives from it much of his inspiration. Indeed, he believes that he has lived in Italy in a past life and each visit always feels like a homecoming.

Through Brian, Alfredo has learnt much about art and helps him by managing his practice. After his fantastic career as a master hairstylist, it was very difficult for him to close that long chapter. Now a new and equally exciting journey has begun. His life is a shining example that no matter where one comes from and how many obstacles one encounters along the way, success can be achieved if will, passion and vision are there.