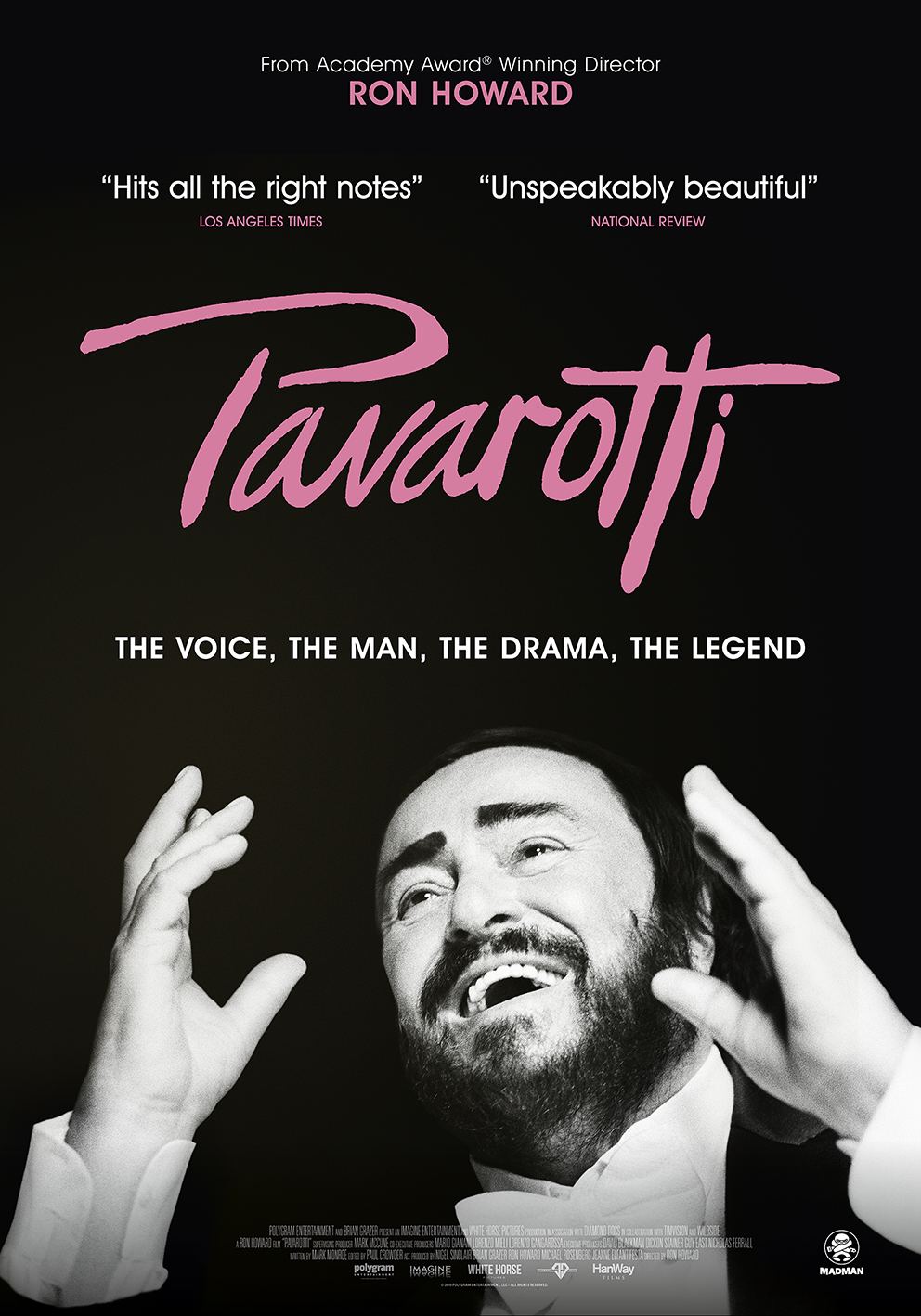 Pavarotti - Review. A tribute to the Maestro’s soul

What has prompted Howard to make a documentary about the late Maestro? Well, the worldwide popularity of the opera singer already makes of him a good subject, but what attracted Ron Howard was not the opera singer, but the persona. Howard, as many, didn’t know much about him, he is not a fan of opera music, but it was Pavarotti’s charisma that, as to many, appealed to him.

“Pavarotti” is, in fact, a journey to discover the person behind the great voice.

The documentary will be in cinemas from the 24th of October. Here you can get an insight of the movie.

At the beginning of the documentary, when asked, ‘How do you want to remembered in 100 years?’ Pavarotti answers that as a singer he wants to be considered as the one who brought opera to masses, a singer who never

did things only for the sake of doing them.

‘And as a man?’ Pavarotti thinks about it, but you need to watch the doc to get to know him (if you haven’t known him yet) and see what will be the humble answer. Because Pavarotti was a singer with a great voice, a diva sometimes, but also with a humble personality and friendly manner and even with some dose of insecurity.

The approach to opera was natural since his early life: born in1935, during the WWII, he was the son of a baker who was a tenor himself - better than Luciano, as the Maestro remembers, whilst his mother had an opposite opinion - but for some reasons couldn’t turn his passion in a profession. Luciano, instead, had the courage, the voice and the support to bring ahead his and his father’s love for opera. Pavarotti didn’t just become an opera tenor, but the greatest without equals, and so today there is an empty spot in the opera music that it seems nobody can fill in.

The movie is build through archive footages and new interviews. The audience can see pieces from Pavarotti’s concerts, excerpts from behind the curtains and from his private life as well as interviews with people who have had a role in Pavarotti’s life and career. Among the whole material collected, they deserve a mention the interviews with Bono from U2, with his lovers and colleagues, with Luciano’s two wives and with his three daughters from the first marriage.

From their memories the audience comes to know interesting anecdotes and truth never revealed.

At his debut, in the early Sixties in Italy, Pavarotti met immediate success, thanks also to the Australian soprano Joan Sutherland, one of the first to see in the young Luciano a prominent voice and the one who taught him how to properly use the diaphragm. Luciano followed the soprano in a tour in the land down under, and after that they toured in America.

The tenor’s concerts brought him back to Italy and Europe and then to America again. His voice reached not only the opera’s fans but also those unfamiliar to that genre. Soon he was hosted in many TV shows and his face appeared on the cover of many popular magazines.

Time for the family was sacrificed, but as interviewees claim, he cancelled all the commitments to stay close to the youngest daughter when she got seriously ill.

Along with fortune, in fact, also negative events marked Pavarotti’s life and personality. Almost all the characters he played are tragic and die at the end. Pavarotti lived their lives bringing them to the stage, but the drama in them followed Luciano outside the theatres and arenas.

Although his private tragedies hit him since he was a kid, or probably because of that, Luciano faced life with a positive attitude. He was funny, romantic and charming. He knew life is short and it seems he acted accordingly.

The documentary leaves room for Luciano’s loves, a side that may still hurt his first wife, Adua Veroni. Especially when the love affair with Nicoletta Mantovani, the second future wife - 34 years younger than the tenor - appeared on the news. It was something that the family suffered from and that the Italian public opinion (mostly fervent catholic) couldn’t accept and support. Although the criticism, it revealed to be a lasting lover which brought them a new daughter.

Perhaps for this or perhaps because of Luciano’s personality, the public opinion was able to forgive the tenor, considering also the other deeds that characterise him. As a matter of fact, his humanitarian activities around the world are also remarkable.

Ron Howard retraces the initiative he brought forward such as the campaigns with Princess Diana against the antipersonnel mines, the Pavarotti & Friends concerts - featuring Italian and International music stars such as Zucchero, Lucio Dalla, Bocelli, Sting, U2, Brian May, Brian Adams and so on - which not only raised money for wars victims and refugees but also placed pop and rock music in communication with opera.

Bringing opera to masses was Pavarotti’s cause. It begun years before, when his concerts were televised and watched all over the world, when he was able to export opera to China, which music tradition ignored this genre, or when he with Placido Domingo and José Carreras formed the Three Tenors and sung at the Fifa World Cup in 1990, turning Nessun dorma (from Turandot by Giacomo Puccini) in the Cup soundtrack.

As Ron Howard has claimed, reading the translated lyrics he realised that opera is for people, it’s not an elite art form, it’s populist.

Using footages of concerts, the director has levered on devices to reconstruct the same audio effect as it was in the original performances so that Pavarotti’s audience can get closer to a real live experience. The music is well used to underline the events recounted, so that Pavarotti’s voice becomes the soundtrack of his life episodes recounted and his life becomes an opera in itself.

The documentary covers many aspects and facts, but something is omitted. Apart from a missing person among the interviewees - Mirella Freni, who would have been interesting to listen to, since she is Luciano’s childhood friend and has followed the same path career, performing even with him in few occasions - Ron Howard doesn’t linger over negative incidents occurred. He totally avoids recalling some of them, such as the reputation rose around Pavarotti as the artist who cancelled concerts the most, or the more serious accusations of tax evasion. However, it’s also impossible combine all the events of a lifetime in a two-hour documentary and the director has made his choice: “Pavarotti” is a tribute to the Maestro’s soul.

With his tour in Australia, Pavarotti became very well known and greatly appreciated among the Italian community and beyond. His voice is one of the best exports from Italy, an icon recognised worldwide. If these are not enough reasons to go and see the movie, perhaps they are the details from which emerges his personality that will thrill the audience.

Although the documentary may reveal a little new to Pavarotti’s biggest aficionados, it’s still a must-see for opera lovers. However, it deserved to be seen mostly by those who have not got close to Pavarotti yet. Because if it was his voice that attracted opera fans, it was his person that everyone who met him fell in love with. Indeed, as José Carreras says, ‘He was fantastic in the singer side, but in his personal side, believe me, he was even better’.

Release date: in cinemas around Australia from October 24th