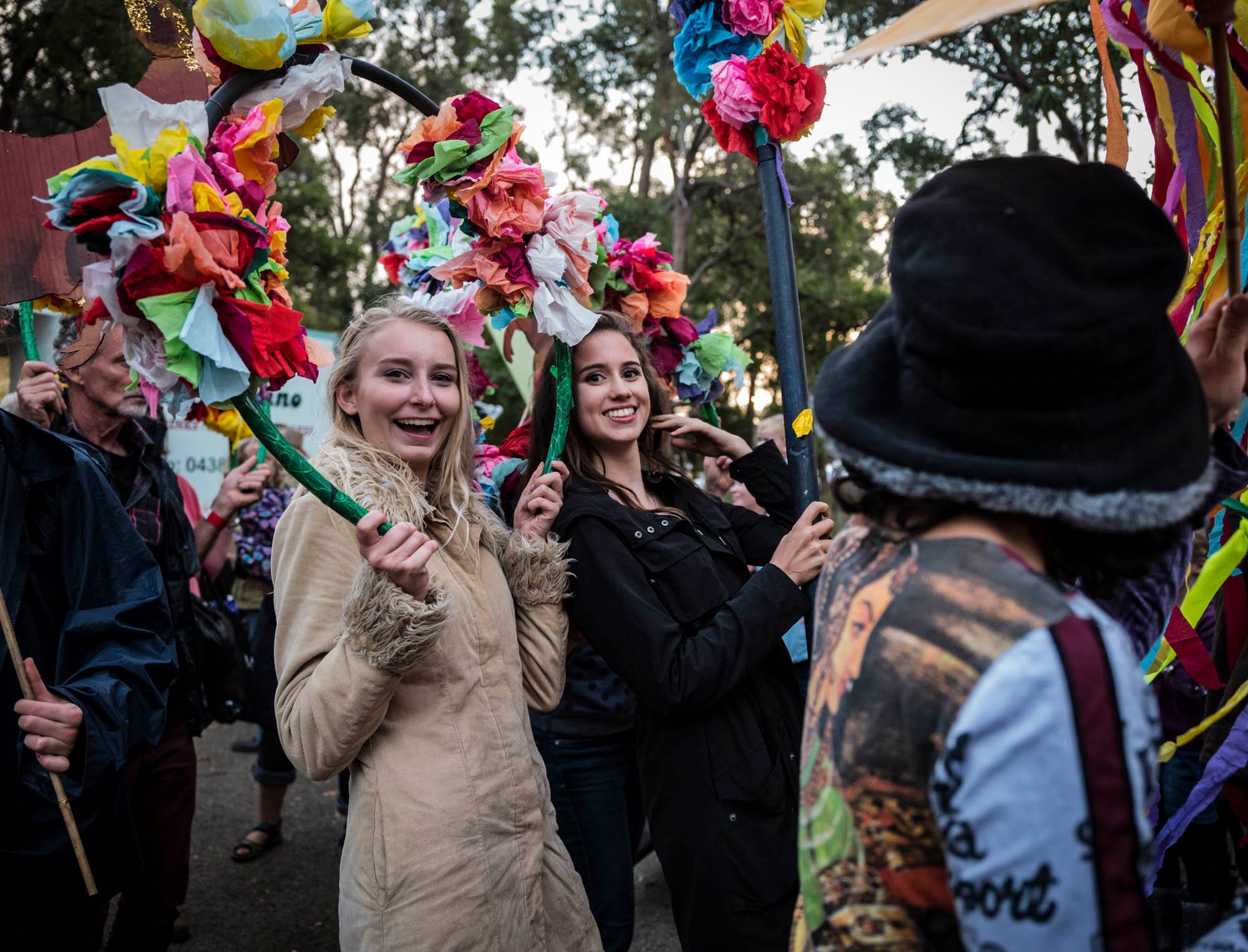 The Fairbridge Festival, held in May this year, took on a special Italian theme. Folk legend Riccardo Tesi and the superb Banditaliana enchanted audiences with their contemporary, virtuosic take on music from the oral tradition in central and northern Italy. (Above: Fairbridge Festival closing parade - Photo: David LeMay)

In another marquee, Aria winner Kavisha Mazzella and her band played a musical accompaniment to a rare and precious silent film, ‘Dall’Italia all’ Australia’ by Angelo Drovetti. Originally played in cinemas in Italy in 1925, the film, showing footage from the ship, was an hour-long advertisement for migration to Australia, promising an adventure and an exciting new life.

Melbourne-based Italian folk band Santa Taranta also presented their new show, ‘Songs from the Homeland’, folk songs collected for the National Library of Australia, and a tribute to the music of Italian migrants throughout the country.

Through this careful artistic direction, Rod Vervest, director of Fairbridge Festival, created a snapshot of Italian folk culture in Australia as it is at this unique moment in history. The experience of the post-war migrants is honoured by Kavisha, the daughter of this generation. The music of these migrants is reimagined by Santa Taranta, and Italian culture in Australia is valued, given a place at one of Australia’s most prominent and well-loved folk festivals, alongside the crème de la crème of Italian folk musicians (Riccardo Tesi and Banditaliana).

Last year, the Italian nu-folk scene was surely stimulated by visiting Sicilian power trio Oi Dipnoi, as well as Unavantaluna, also from Sicily. Their concerts in Melbourne and Sydney showed that Australian audiences are more than ready to embrace authentic, contemporary Italian folk.

Following on from this enthusiasm, in March this year, Melbourne saw the debut of the Taranta Festival, an exciting new cultural initiative. The aim of this festival is to highlight Italian folk genres as an exciting global trend. Who better to launch this idea than Canzoniere Grecanico Salentino (CGS), which was formed in the 1970’s and, now in its second generation, has exploded onto the global world music scene, winning Best Band at the 2019 SONGLINES awards.

At the Taranta Festival’s opening concert at the Thornbury Theatre, CGS was supported by Dora and Angelo Marchese. Now in their 80s, this duo have been performing in Melbourne for decades, and represent the beginnings of Italian live music in Australia. Folk and Romany group Vardos Trio, also played at this event, their invigorating set sandwiched between Dora and Angelo Marchese and CGS. Vardos, in this context, represent the interaction between cultures that enriches the Australian music scene, providing a vital context to the way Italian musical culture has evolved in Australia, that is, not in a vacuum, but as part of a constant cultural dialogue.

Meanwhile, in Griffith NSW, a group of young people, including organiser Patrick Zurilli, were bringing to life the first edition of The Griffith Italian Festival, which sold out in the days preceding the event.

‘With 60% of our population coming from Italian background, we asked ourselves why there wasn’t already an Italian festival in Griffith’, Patrick says.  The organisers took inspiration from one of Australia’s biggest Italian festivals, the Melbourne Italian Festa in Lygon St, Carlton.

‘We went down to Melbourne, and we saw what they were doing there. We had some bands from Melbourne, but what differentiates us is that we were really wanting to showcase our local Italian culture.’

The future, Patrick says, is about reconnection.

‘We want to focus on the local, but in future we would be really open to working with people from Italy and learning from them. Especially for us younger generations, that would be a good way to learn about our roots, to reconnect.’

The Griffith Italian Festival lineup included nu-folk groups like The Rustica Project, whose members include a mix of first and second-generation Italian migrants. In this way, the festival is already opening these channels of communication between the old and the new. Also of note at Griffith was Siesta Cartel, a charming new group that describes themselves as ‘young Italians from Melbourne,’ declaring proudly the existence of Italian culture and identity beyond the Italian peninsula. Siesta Cartel play Italian music learnt here from their parents, Grandparents and their records. ‘The music that raised them,’ as they describe it, is made new and fashionable again as it is reimagined by them.

Italian folk bands included in the program of Australian folk festivals, visiting Artists from Italy collaborating with Australian artists from Italian and other traditions, second and third generation Italian-Australians re-interpreting the music of their childhoods, new migrants connecting with the musicians who have provided the soundtrack to country halls and Italian clubs since the 50s and 60s.

All of these elements are currently present in the Australian music scene, and each of them are necessary to truly reflect the complexity of Italian music culture in Australia. With so many new initiatives, and new ways of including Italian music in existing events and festivals, it’s an exciting time for Italian music and entertainment in Australia.