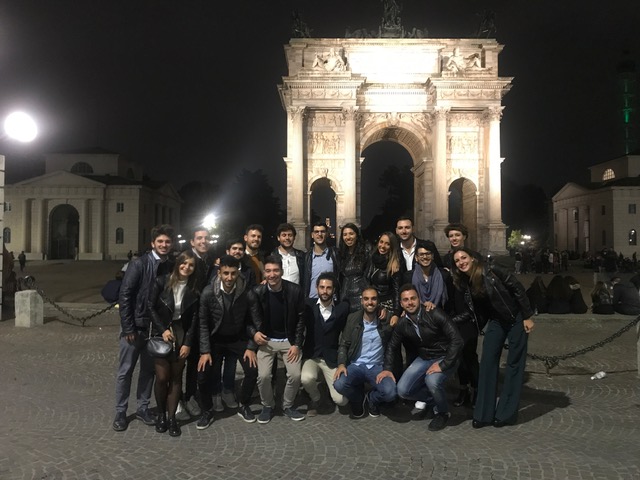 My first close encounter with the young Italians

So far, all of my past articles have been surprisingly easy to write. That may be because I’ve been writing about my own experience as part of the Italo-Australian youth, as well as gli italiani anziani, the elderly Italians (or Nonni) with whom most of us Italo-Australians grew up with. (Photo Courtesy of Natalie Di Pasquale)

by
Natalie Di Pasquale
on
May 28, 2019
Category:
Lifestyle
Tags:
Immigration

I giovani italiani (young Italians), on the other hand, was a group I had only interacted with throughout the last few years, whilst working at the iconic Brunetti café in Melbourne’s historical ‘little Italy’. When I thought of modern day migration back then, I never associated it with Italians. I was freshly graduated from high school, and in my limited experience, Italian migration was something that occurred years ago after the Second World War.

Suddenly, I was walking through Melbourne’s CBD hearing more Italian spoken than English. It made me wonder what it would be like to live in Italy as a young person today, to not just be another Australian tourist. After all the stories from different sources, old and new, I just had to find out for myself. And throughout the last seven months, I’ve been doing just that. I’ve spent a semester studying abroad at the Università Cattolica del Sacro Cuore, Milano, Italia.

When we think of the Italo-Australian youth, we tend to be generalised into a category. ‘We are ‘wogs’ who grew up with old-school Italian traditions. We are family-orientated with a lot of work ethic. We aim to grow up and marry another Italo-Australian. This is a stereotype, but in my experience, it is quite accurate! However, I am simply not able to generalise i giovani italiani the same way, for many reasons.

In February this year, Italy was recorded as having the second highest youth unemployment rate, behind Greece (Istat). With a population of approximately 60 million and a surface area 1/14th of that of Victoria, Italy is quite a competitive place. Australia has a population of almost 25 million, with many young people beginning part-time work as early as 15 years old.

In Italy, should one decide to go to university, which many Italians do (average annual tuition costs roughly $2,000 AUD compared to $8,000 AUD in Australia); the workload is so intensive that many young Italians don’t find the time to work. For those lucky enough to find a job, there is no minimum wage. Illegal employment is rife, so students may be employed without a contract and paid cash in hand. I did not meet one Italian university student who worked regularly. I knew one who tutored occasionally.

In the time I spent in Milan, I believe I met two Milanesi who claim to be from the city of Milan itself. Every other person was from another Italian city or from overseas, like me. This means leaving home, being away from family from as young as 18. It’s a foreign concept to me. In my community, we usually stay home until we marry, and even then we might stay there!

Italy is made up of many towns, and when searching for opportunity, the big city options are few. During the time I lived in Milan, my friends returned home to visit family maybe once or twice if they could, dependent on distance and cost. This trend makes ties with family distant. Traditions, if kept, would only occur on a few special occasions. Most said they haven’t participated in traditions since they were kids. I find it hard to imagine not being able to ‘drop in’ at my grand-parents house or come home to eat dinner with my family.

My Italian friends were so jealous that I come from Australia and were surprised to find that I identify so strongly with my Italian heritage. They are following Anglo-trends, listening to music from England and the USA, and are looking far away from home for their next move, because they have to. They are fluent in English, French and Spanish, and doing internships at international firms. Young Italians create new lives in cosmopolitan, multi-cultural cities.

At university, Italian students are introduced to the Erasmus Student Network, which encourages exchanges between universities in Europe. Many Italians participate in Erasmus throughout their degree. It is not obligatory, but so common you would just ask, ‘What country did you go to for your Erasmus?’ It is nearly a given. When I announced I was leaving home to live overseas temporarily for my equivalent study abroad, it was such an absurd concept to my community. I endured lectures from family members for the months leading up to it.

I giovani italiani I met abroad were mostly from university, but there were others I met out and about, working, and some old friends I had met in Melbourne and who had decided to move back to Italy for various reasons. They are some of the smartest, confident and independent people I know. With or without a tertiary education, they hold strong opinions on politics and economics and have a wide general knowledge. Growing up with the same roots, the similarities between us created our bond. However, through them, I learnt so much more about the Italian culture. I was introduced to new foods and trends. Although they may not be making the passata anymore, the new generation of Italians are quick thinkers, ambitious and worldly with a love for food, family and friends.

Like our nonni, they give meaning to everything and always have room at the table.

Natalie Di Pasquale. Currently studying a Bachelor of Law/Arts majoring in Italian. She has two major passions - writing and Italian culture. She is the founder of the La Trobe University Italian Social Club and previous representative of VITA (Victorian Italian- Australian Tertiary Association). Having travelled to Italy many times growing up and living in Milan as a student, Natalie can proudly say she has two homes and she continuously inspired by them both. Her aim is to share with Segmento's readers her own and others personal experiences with the Bel Paese. Follow Natalie on this journey or how she prefers to call it, ‘La Dolce Vita’.

THE TRANSCULTURAL VERSATILITY OF THE MANDOLIN