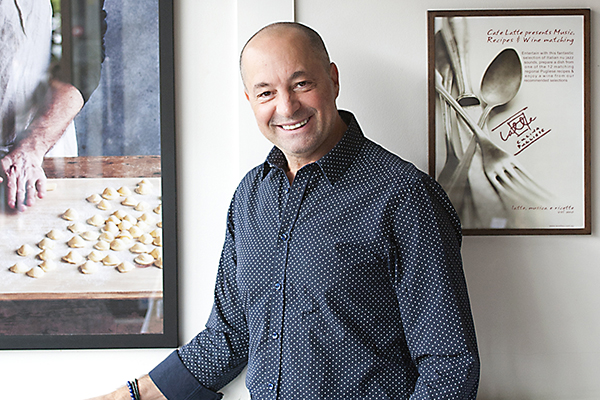 Luca Lorusso: a jazz pianist and an old-school restaurateur in the heart of Toorak

Running a restaurant is like a performance, according to Luca Lorusso. There is a subject, a script, characters, costumes and a carefully designed scenography. There are critics. Like any production, the success (and longevity) of the production depends on the passion and dedication of its director.

Luca would know. He is a veteran of Melbourne’s hospitality scene, having established Cafe Latte in Toorak in the early 90’s. He has seen three generations of customers come through the restaurant since then. Three different ‘audiences’ with very different ways of living the restaurant experience.

‘In the early nineties’, he says, ‘you got on the phone’, (he mimes using a rotary dial) ‘and you reserved your table. In the early days we were booked up to three weeks in advance. And there was a certain loyalty. The customers were interested in getting to know the restaurant. There wasn’t the kind of choice that there is now.’

In the age of social media and trip advisor, customers move around, compare and are eager to try new things. But according to Luca, it is still just as important that their needs are met.

‘A review on trip advisor is very important. Every performance is unique, and so is every audience’s experience of the restaurant ‘production’.

Luca’s view of the restaurant as the setting for a performance is perhaps contextualised by his background. His career started in improvisation and jazz piano. He had finished studying piano at the conservatory of Bari when he met an Australian girl on the train, and decided to immigrate in order to continue the love story. He studied improvisation at Victorian College of the Arts before moving to what he calls his ‘second love’- gastronomy and hospitality.

He explains that the choice was a financial one.

‘Both music and hospitality are businesses. Everything is a business whether you like it or not. The difference is, when you go into hospitality, you see the results of your efforts immediately. It’s either working or it’s not. If it’s not, you move on, but if it is, you are rewarded for the work you put in. Something that doesn’t happen in the arts. In the arts you can work away for years at something and never see the rewards.’

The hospitality industry has certainly rewarded Luca Lorusso. His cookbook ‘Sharing Puglia’, a collection of recipes from the Apulia region, has been translated into three languages and sold internationally. In its pages is the wisdom of a self-proclaimed ‘old-school restaurateur’, who is all about ‘hospitality at its best and making people feel good’.

After 27 years, Luca says its time to take a step back from business. He is currently building a new home in Melbourne’s south, which will include a recording studio. Luca says that he is looking forward to returning to experimenting with music and recording soon, without the financial worries that haunted him when he was younger. But when asked if he will let go of Café Latte, the answer is a decisive ‘No’.

Today his family of five is centered around the restaurant Luca refers to as ‘his headquarters’. His children have grown up there, and after other hospitality businesses that he has grown and sold, this old-school restaurateur still values loyalty, and doesn’t think he will let go of Café Latte any time soon.

'But then again business is business', he adds 'and everything is for sale at the right price'.