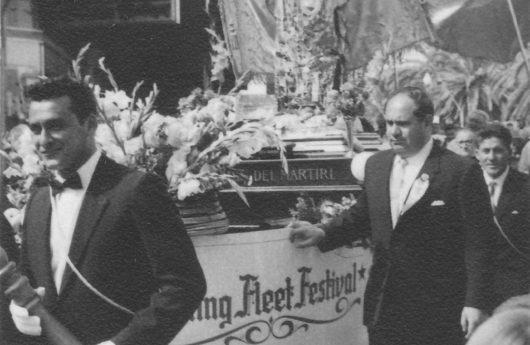 When Italian migrants made the courageous decision to move to Australia, they did not just leave behind family and friends but also their cherished traditions. The “Festa del Santo Patrono” – the feast in honour of the Patron Saint – was and still is the most important religious and social event in ones town or village.

In Western Australia, the Italian community established a number of festas to display their devotion and affection to saints including Saint Anthony, Saint Joseph and Saint Leo, but none of the festas are as well-known or attracts as many people as “The Blessing of The Fleet” in Fremantle.

While the port city of Fremantle is now home to a number of Italian migrants from various parts of Italy, the first members of the Italian community were mostly fishermen from Capo d’Orlando (Sicily), the Aeolian Islands and Molfetta (Puglia). These fishermen were accustomed to grand processions and religious celebrations in their hometowns, in which the local priest would bless their fleet to ensure a safe and prosperous fishing season.

The first fishermen arrived in the early 1900’s but it was not until 1948 that those from Molfetta organised the first Blessing of the Fleet celebration. In 1954 the Molfettesi were joined by their Sicilian counterparts and since then the “Madonna di Capo d’Orlando” and “Madonna dei Martiri”, Patron Saint of Molfetta, have been affectionately paraded around the streets of Fremantle on the last Sunday of every October.

The Blessing of the Fleet is a spectacle to behold. It is not every day that one witnesses a medieval tradition in a hipster city such as Fremantle. Children and adults are dressed in traditional costumes, Italian music serenading the town. A group of women carry the silver Madonna di Capo d’Orlando, and the men carry the Madonna dei Martiri from the historic St. Patrick’s Basilica to the fishing harbour.

Since its humble origins the festa has grown in size. Other Italians and the Croatian and Portuguese communities have embraced it. “Even non-Catholics love seeing the procession as we walk through the streets of Fremantle” says John Minutillo, President of the Blessing of the Fleet’s organising committee. “They like seeing the procession, the Italian culture. People come from everywhere. You’d be surprised how many come out onto the streets just to see it.”

While the festa attracts thousands of spectators each year, committee members have allowed it to become bigger and bolder to ensure its longevity. This year The Blessing of the Fleet collaborated with Nella Fitzgerald, festival director of Little Italy By The Sea, a weekend-long street festival that brought Italian flair back to the historic town of Fremantle, which was once considered a Little Italy of Western Australia.

This year the Fremantle Fishing Boat Harbour and Bathers Beach were transformed into bustling piazzas, which celebrated everything Italian from food to art, with over twenty pop-up restaurants and bars, dazzling floorshows, cooking demonstrations, spaghetti eating competitions and the Australian Specialty Coffee Championships. “There is so much more to our culture than just food!” says Fitzgerald. “It encompasses art, science, family, music, fashion and to bring them all together is amazing… It’s celebrating what we are perceived as being and bringing our people together to share our heritage and our brilliance.”

The festival director hopes that having “Little Italy By The Sea” with “The Blessing of The Fleet” will encourage young Italo-Australians to embrace their heritage and the traditions of their ancestors.

“Blessing of the Fleet is a tradition and by bringing Little Italy by the Sea into it, I’m incorporating the contemporary Italian culture with the historical culture and I’m bringing recognition to all our people. Our parents, our Nonni, that came to a new country and started with nothing and tried to bring their culture and their people together.”