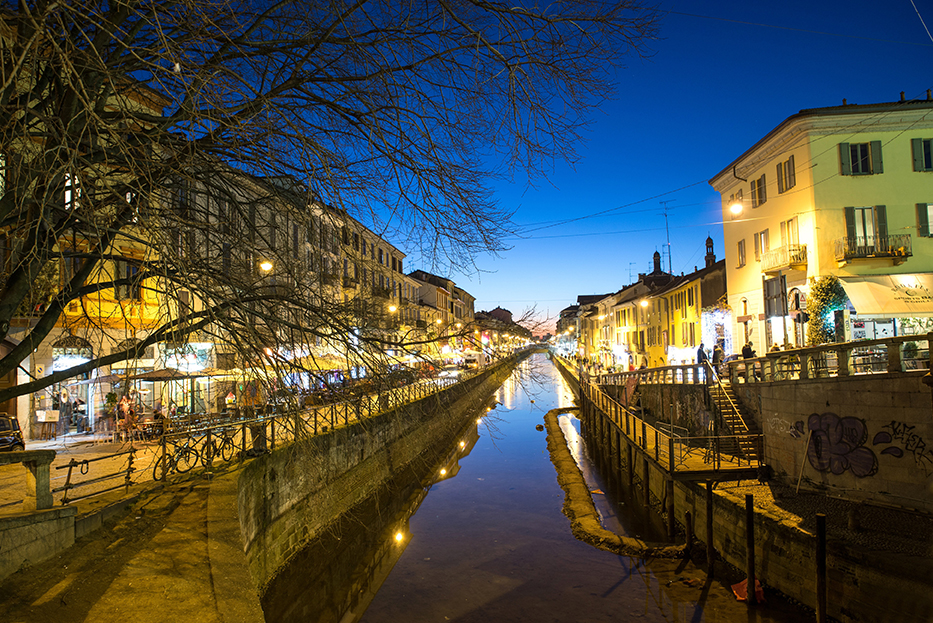 According to the Wall Street Journal, it's official. Milan is Italy's hottest new destination. Tourism figures show 2017 as a record year with over nine million tourists choosing to visit the city of fashion and design. Rachael Martin looks at what Milan has to offer this autumn.

Milan celebrates artist and photographer Sarah Moon with two exhibitions that opened alongside September Fashion Week in recognition of Moon’s contribution to fashion photography. Galleria Carla Sozzani’s exhibition “Sarah Moon: Time at Work” traces her work from 1995 to 2018. (www.fondazionesozzani.org) At the Armani/Silos exhibition “From one season to another,” Moon places her fashion photography alongside other photographs to create a dialogue between the two. The Armani/Silos also has a permanent collection of clothing and extensive digital archive that is a must for any fashion lover. (www.armani.com/silos) Both exhibitions show until 16th January 2019.

Autumn also brings the third edition of Photo Vogue Festival that examines photography, and particularly fashion photography, and its place within society. The theme for this year is “Embracing Diversity.” (www.vogue.it/en/photo-vogue-festival) At the Triennale Design Museum “Stories: Italian Design” explores Italian design between 1902 and 1998 via 180 works. (www.triennale.org) The Palazzo Reale welcomes “Picasso – Metamorphosis” until 17th February 2019, an exhibition that includes works by the artist and ancient works that inspired him. (www.palazzorealemilano.it)

No visit to Milan would be complete without a visit to the Prada Foundation. The Milan Osservatorio in Galleria Vittorio Emaneule II is dedicated to photography and visual languages, and has amazing city views. The Milan venue in Largo Isarco (there’s another venue in Venice) has a 60 metres tower that opened earlier this year. It houses the Atlas project, a dialogue between Miuccia Prada and art historian and critic Germano Celant. Highlights include Jeff Koon’s Tulips and Cartsen Höller’s Upside-Down Mushroom Room. “Sanguine: Luc Tuymans on Baroque” juxtaposes contemporary artists with Old Masters. (until 25th February 2019) Also visit Bar Luce, designed by Wes Andersen and inspired by typical mid-century Milanese cafés, for panini and cakes in a retro atmosphere. (www.fondazioneprada.org)

Take a walk around the fashion quadrilateral for inspiration. It’s extra pretty when dressed in Christmas lights. Or stay warm in 10 Corso Como (www.10corsocomo.com), Milan’s ground-breaking concept store for clothes, accessories, books and more. Excelsior (www.excelsiormilano.com) is another concept store with designer names, books and lifestyle accessories, and a food hall in the basement. Prada in the Galleria Vittorio Emanuele II was where Miuccia Prada’s grandfather began the family firm, with original fittings and a cabinet with a collection of early 20th century products. (www.prada.com) Foodies should head to Eataly (www.eataly.net) for three floors of food, cookery books and kitchen equipment.

Also check out Milan’s vintage clothing scene for vintage Prada, Gucci and the rest. Cavalli e Nastri (www.cavallienastri.com) specialises in clothes, accessories and jewellery from the early 19th century onwards, while Madame Pauline (www.madamepaulinevintage.it) is distinctly French. Pourqoui Moi Vintage (via di Ripa Ticinese, 27) sells Scandinavian names such as Marimekko and Vuokko alongside many Italian designers. Also go to East Market in Lambrate, one of Milan’s edgier art and design areas. The market is inspired by London’s East End markets and sells vintage clothing, accessories, sneakers, vinyl and more. Check their website (www.eastmarketmilano.com) for dates. While you’re up there, call in at Lambrate 20134 (www.20134lambrate.it) for vintage clothing from the early 20th century onwards.

Breakfast at the bar (for bar, read café) is a must. Soak up a traditional Milanese atmosphere at the original Pasticceria Marchesi (www.pasticceriamarchesi.com) along Corso Magenta or head to hip and trendy Pavé (www.pavemilano.com) in the Porta Venezia district for divine pastries that are on everyone’s lips.

For lunch, try the recently opened LùBar (www.lubar.it) for elegance amidst the greenery. It’s in the city’s modern art gallery (www.gam-milano.com). Or head to Pasto (via Zecca Vecchia, 4) near the 5 vie design district (www.5vie.it). They make fresh artisan pasta and offer a daily lunchtime menu.

Aperitivo is a Milanese event. Go to Champagne Socialist (www.socialist.wine) for natural wines and a traditional Italian aperitivo of salami and cheese, or to Mint Garden Café (www.mintgardencafe.it) for cocktails amidst the flowers. Both are in the Porta Venezia district.

For dinner, head to Via Solferino near the Brera district. Dry Milano (www.drymilano.it) serve cocktails and pizzas and related to Pisacco (www.pisacco.it) across the road, the Michelin Guide restaurant with a team that includes chef Andrea Berton. Alternatively, head to Drogheria Milanese (www.drogheriamilanesi.it) for pasta and burgers alongside the locals. They also have a restaurant near the Navigli.