No items found.
Product is not available in this quantity.
LoginLogoutSubscribe
Fashion 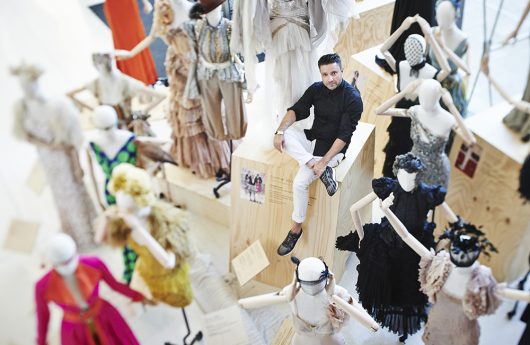 In a glittering career spanning over three decades, the Perth-based designer Aurelio Costarella has cemented his way to the top of the Australian fashion scene; from showcasing at New York Fashion Week, to having A-list celebrities Rihanna and Kendall Jenner snapped wearing his beautiful gowns, to dressing Denmark’s Crown Princess Mary. Despite his incredible achievements in such a cutthroat industry, Costarella has remained an unpretentious and approachable person.

Like many migrants before him, Costarella’s father, Pasquale made the courageous voyage from Italy to Australia. With only a suitcase and $20, he left his pregnant wife and young daughter behind in Reggio Calabria to establish himself first and give his family a better life. Four years later the family was reunited and in 1964 Aurelio was born. “I have a huge respect for what my parents endured to give us an incredible life in Australia,” he says. “I have become who I am because of my upbringing.”

Costarella fondly recalls his upbringing in the multicultural suburb of North Perth in Western Australia, surrounded by his Italian, Greek and Jewish neighbours. “We had one token Aussie family across the road” he recalls. Despite growing up in a multicultural neighbourhood his parents instilled a distinct Italian lifestyle onto Aurelio and his siblings. “My family was incredibly traditional. I spoke Italian at home long before I learnt to speak English. We grew all of our own produce. (My) parents made the obligatory Italian sausage, bottled sauce, and homemade wine. Trays of tomatoes were left on the house to sundry, and Sunday lunch was traditionally pasta day … Mum would make the sugo early morning before heading off to Sunday mass.”

But the Sunday sugo and pickled vegetables was not all his mother Teresa was renowned for. She was a talented home dressmaker and it was from her that he learnt the tricks of the trade. “Mum made all of our clothes, knitted jumpers. Only shoes were store bought. From early childhood I watched mum create pieces of clothing. It was somehow magical.” At the age of ten, Aurelio began stitching together fabric scraps on the singer treadle machine that had belonged to his nonna. “It’s one of the few possessions mum brought out to Australia with her, and my only connection to the grandmother I never met.”

Despite his passion for fashion, Costarella enrolled into architecture at Curtin University, before realising a career in fashion was a better fit for him.  “I moved into fashion without any training – I’m totally self-taught,” and in 1983 he launched his label Ray Costarella.

However, the road to success was not an easy one. “Building a business from a Perth base has certainly been a huge challenge,“ he says. “In retrospect, it would have been easier had I moved … I began my business at a time where Perth retailers had no interest in stocking a WA brand. I had to work extra hard to be noticed. Eventually, I had to jump on a plane and sell into the east coast market to prove myself back home.”

It was a gamble that paid off and the Ray Costarella brand grew to become one of the most sought after Australian brands in the world. However, in 1998, the brand suffered a major blow when Costarella’s relationship with equal-share investor Sylvia Giacci turned sour and in 1998 Ray Costarella ceased.

With the “strong sense of pride, integrity and hard work ethic” that was instilled in him during his childhood, Costarella was ready to relaunch his career in 2000–this time under his birth name. “Ray was the name I was given by my Grade One teacher on my first day at primary school. Apparently, Aurelio was too difficult to pronounce. After losing everything in 1998, it seemed appropriate to relaunch using my birth name … (which) was very important to me.”

Since then the Aurelio Costarella brand has grown from strength to strength. In 2013 the Western Australian Museum hosted a 30-year retrospective exhibition of his career for him, cementing his status as a West Australian icon.  In 2015 Costarella opened his flagship store in the luxurious Perth State Building and was at the centre of a bidding war between major department stores Myer and David Jones. His garments were featured on the rating hit The Bachelorette and are prominent fixtures in the wardrobes of model Jennifer Hawkins and television personality Dannii Minogue. “Danni has always been a favourite and someone I have had the pleasure of dressing on many occasions. Dressing Rihanna was certainly a huge buzz and Dita Von Tesse has always been a delight to work with.” However one of his biggest highlights was dressing Crown Princess Mary of Denmark, which he described as “very special”.

While his busy schedule has seen him take on New York and Paris, Costarella is yet to travel to Italy. “I have so much family … the moment I step foot in the country I have to visit them all. I’m waiting for the right time to be able to immerse myself in the culture and spend a period of time there exploring.”

Despite his success, Costarella is unsure as to what the future may hold. “I’ve become a little disillusioned with the fashion model,” he says candidly. “Sadly it is no longer sustainable. I’m in the process of reinventing myself and changing my approach to fashion. I believe we need to move to make fashion covetable again … fashion has become far too disposable and consequently unsustainable.” Regardless of what the future has in store, Costarella’s perseverance and determination in the past prove that like any little black dress, he will never go out of style.