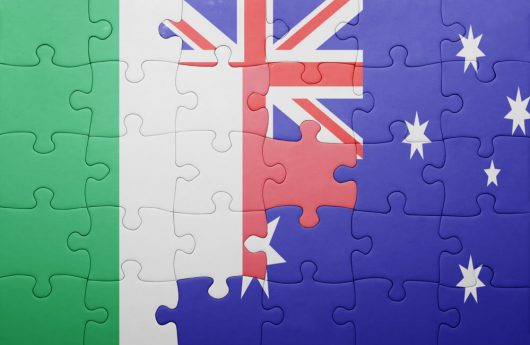 In 2006, I remember making one of the hardest choices in my life, having to choose between supporting Italy, or supporting Australia in the 2006 World Cup prior to the Italy vs Australia round sixteen match. I distinctly remember siding with Italy rather than Australia,this prompted my brother, James, to buy me an Italian National Football Team beanie for me to wear to show my support.

In my younger years as a child, I always considered myself to be Italian more so than Australian in fact. I would always do well in Italian classes. I would even go as far as to just speak to the Italian teacher in Italian, just to show everybody how Italian I was. At home, it was always Italian everything, Italian dinners (at one point, every night was polpette con sugo night), Italian television in the lounge room and me having to speak Italian to my dad. Essentially, the household felt more Italian, culturally, than Australian. Of course, there was always an Australian aspect within myself. For example, I did enjoy Australian Rules Football as a child, and went to a predominantly Anglo-Saxon Primary school, where the Australian National Anthem would be sung every Monday morning.

Commencing High School seemed to coincide with the decline of my Italian. Both the language and culturally. The High School I attend does not offer Italian as a subject. Consequently, my Italian started to quickly deteriorate with no source of practice apart from speaking to my dad and hearing conversations in the house. This was simply not enough to improve my Italian and/or maintain it. This made me both upset and confused about my cultural identity. With despair, I tried partaking in Italian classes on weekends, but I could not sustain the other activities I was involved in and the workload I had from school which took up all of my time on the weekend, let alone weekdays. This made communicating with my dad a arduous task, as well as communicating to my relatives such as my Nonna. My two brothers were blessed with the opportunity to learn Italian at an advanced level having both lived in Italy when they were younger. I didn’t have the same opportunity. As a result, my brothers and parents (who are fluent Italian speakers) could communicate with my cousins and other relatives with ease whenever we would travel to Italy, while I found it very difficult to communicate my ideas in Italian. This made me feel less connected to Italy and made me rethink about which nationality I truly identified with.

Today, I consider myself to be the most Australian in my family, having been born in Australia and arguably the least connected to Italy. However, this is not only what I identify as. I am Australian with Italian blood and heritage. I am still, culturally, tied with Italy as much as Australia. Even if I were to never visited Italy again (not true), the Italian heritage is still there and cannot cease to exist. Having two nationalities never means picking one and siding with it. Instead, it means a combination. It’s its own thing that is a result of two nationalities mixing, a fusion of cultures, a blend of the best of both cultures. A composition of both identities. Nationalities are expressed and define by the way you live, the words you speak and the food you eat. A person’s nationality is subject to change. It can be forgotten and it can be adopted. My father, who is originally Italian, adopted to the Australian culture upon arriving in Australia and gained Australian nationality. He is no longer just an Italian now, he is an Italian-Australian. He at times even uses Australian colloquialism.