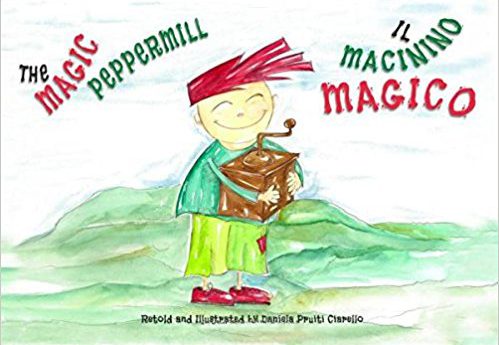 From a young age, Daniela Pruiti Ciarello would often get lost in the magical worlds of the fairy tales and fables she was told. “I’ve always been a dreamer,” she proclaims. “Faries, goblins, dragons and magic mirrors populated my childhood, and I often nestle into this world to escape from reality.”

Her need to escape during a difficult time in her life is what inspired her to pluck up the courage and put pencil to paper and complete her debut bi-lingual children’s book, Il Macinino Magico (The Magic Peppermill).

Born and raised in Sicily, Daniela who is a professional graphic designer left her beloved home behind to embark on a new life with her husband, Maurizio in Australia. “When we arrived in Perth it was a great start. Australia seemed like a paradise. We found new work, new friends, we were learning a new language and lots of interesting things happened.” Their newfound happiness however, was rocked by the 2008 recession. “My husband lost his job and I had to work three jobs to make ends meet.”

“All my dreams had vanished,” she explains. “Every morning I looked in the mirror and asked: ‘Daniela what are you doing here? You made a big mistake; you had a beautiful life in Italy.’ It was during these difficult months, that homesickness knocked on my door and I began looking for comfort in my childhood memories and I began to draw again.”

As she started to draw again, her life started to fall back into place, finally getting a job as an Italian teacher at Beehive Montessori School. Her primary school students there inspired her to pursue her passion project and start working on her first picture book. “By working with children, I am constantly surrounded by their enthusiasm and their stories. I draw inspiration from children’s light-heartedness. They made me realise how rewarding it is to free the imagination and to create,” she says.

Several years later Daniela has finally released her debut bilingual children’s book, Il Macinino Magico (The Magic Peppermill). A retelling of the popular Italian fable, the folktale is about a poor orphan boy who finds a magic peppermill that grants him unlimited wishes. It is a story that is close to the author’s heart: “It was one of the stories my Nonna used to tell me when I was young.”

As an author and illustrator, Daniela is excited to share the beloved tale with a new generation of children, in particular, her students. As an Italian teacher herself, Daniela became frustrated with the lack of resources available to teach Italian in Australia and hopes her book Il Macinino Magico, written in both English and Italian, will be the first of many bilingual books. “The benefits of learning a second language extend far beyond being able to order a cup of coffee in Florence or asking for directions to the Colosseum. As psycholinguist Frank Smith says, ‘one language sets you in a corridor for life, but two languages open every door along the way.”

The Magic Peppermill (Il Macinino Magico) is available to purchase online at ciaoitaliabookshop.com.au

For your chance to win a FREE copy of the book tell us in 50 words or less of your favourite Italian fable.

Please submit your fable by the 31st August 2017 at:segmento@segmento.com.au