No items found.
Product is not available in this quantity.
LoginLogoutSubscribe
Food trends 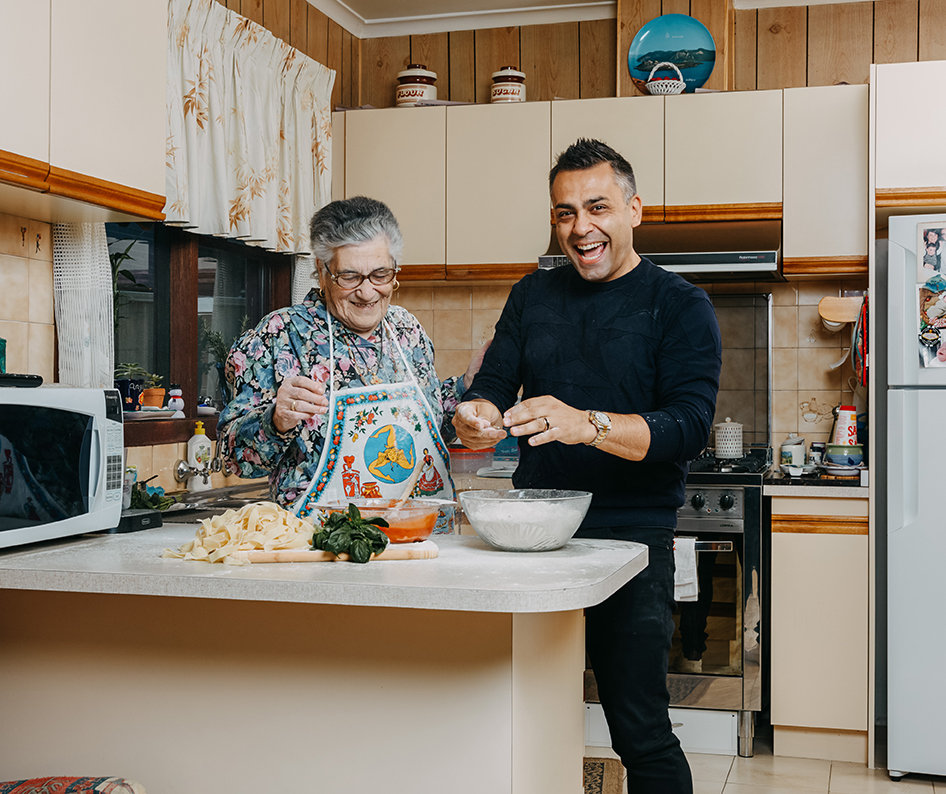 If family is the beating heart of the Italian home, then the grandparents, i nonni, are the enduring soul. I chatted with restaurateur and former World Pizza Champion Johnny Di Francesco about one special relationship in his life; that which he shares with his beloved nonna. 93 year old, Angela Mandarano, who still lives independently at home, holds a very special place in Johnny’s heart. (Photo Melissa Cowen)

Angela, originally from the Sicilian island of Vulcano, emigrated in the post-Second World War wave of migration to Australia. ‘There’s five generations of women in the family at the moment; that stems down obviously from my nonna, my mum, my sister, my niece and my grandniece, so there’s something special about that,’ he tells me, explaining the extensive legacy Angela has created.

‘Every time we’re together, all we do is laugh,’ he says. ‘She’ll say something that’s quite funny, and I play on it, and it stems from there. She’s an amazing woman. She’s funny, she’s witty, she’s strong, very loving, she’s caring.’ Johnny shares with me intimate details of the memories he has of his life lived alongside Angela, all the while gushing about the incredible woman she is. ‘When I look at my nonna I see a strong person, I think that’s something that’s been brought down to the way I do things as well. Nothing’s impossible. I look at her and I think, wow, she’s been able to stay on this earth for 93 years and is still going strong. I think that’s a lesson, not only for myself, but for a lot of people.’

Given Johnny’s passion for Italian food, I was keen to find out how Angela’s food traditions have impacted upon him personally. ‘One dish that has resonated with me since I was a child’, he shares, ‘is her calamari ripieni (stuffed squid). That’s something that I’ve always loved that she’s made. I actually had that dish on my menu at ‘Gradi’ in Brunswick for nearly six years.’ Despite this, it seems that Angela’s biscotti are the real winner of his heart. ‘I remember, and I still see her do it, I walk in there and say ‘What are you making nonna?’, ‘Just some biscotti’. There’s always biscotti being made! There’s a dish I really love, she always tries to have it ready for me if she knows I’m going around, and she called them gigi - they’re a little biscuit dressed in vincotto, then it gets chilled and the vincotto goes sticky, and I just love it.’

As often happens, when you get reminiscing about the past, memories surface that can bring up all kinds of emotions. Johnny told me about how, when he and his cousins were young, they all used to help make the sugo, salami and vegetables sott’aceto. Now, however, he paints a different picture. ‘With our lifestyle today, everyone is so work-oriented, so to do all those little things on the weekend it sort of becomes a little bit taxing. I look at other families that I know, and they still do it! I think it’s beautiful to see because you want to keep it alive, you want the traditions to stay alive. Once the older generation’s gone, all these traditions are going to fade out, and it’s sad. I look at Australia, especially Melbourne, it was brought up on these traditions. I remember going to school and being teased because I had a salami sandwich, and today people are paying big dollars to go and buy a salami sandwich.’

In closing my chat with Johnny I wanted to know what Italian cuisine means to him, as his perspective is rather unique. Rather impassioned he explained, ‘Italian food to me is so diverse; regardless of where you come from, every region has a special dish. We know Italian food in Melbourne or Australia as ‘generic Italian’ and stereotypical dishes; but I believe that north to south of Italy, everyone has a special dish. I believe these dishes are what bring people together around the dinner table. Italian cooking and food is a typical feast where families are able to come together and not only enjoy the food but enjoy company and life. That’s what Italian food to me is all about.’

It would seem that Angela’s legacy will be left in very safe hands, as Johnny continues to forge a path for lovers of Italian food to wine and dine together, to laugh and enjoy all that the cuisine has to offer… just as the Italians do.

To celebrate food shared among families, Gradi at Crown Melbourne put the call out for three special nonni who have amazing recipes to share! The selected nonni, who will be revealed soon, will have their winning recipes featured on the Piatti dei Nonni menu.

The beauty about this campaign is that it makes traditional ‘nonna-style’ home cooking accessible to everyone – no matter the background and heritage. Gradi can’t wait to share the unique stories and delicious dishes with you.

The Piatti dei Nonni menu will be available exclusively at Gradi at Crown as of mid August.