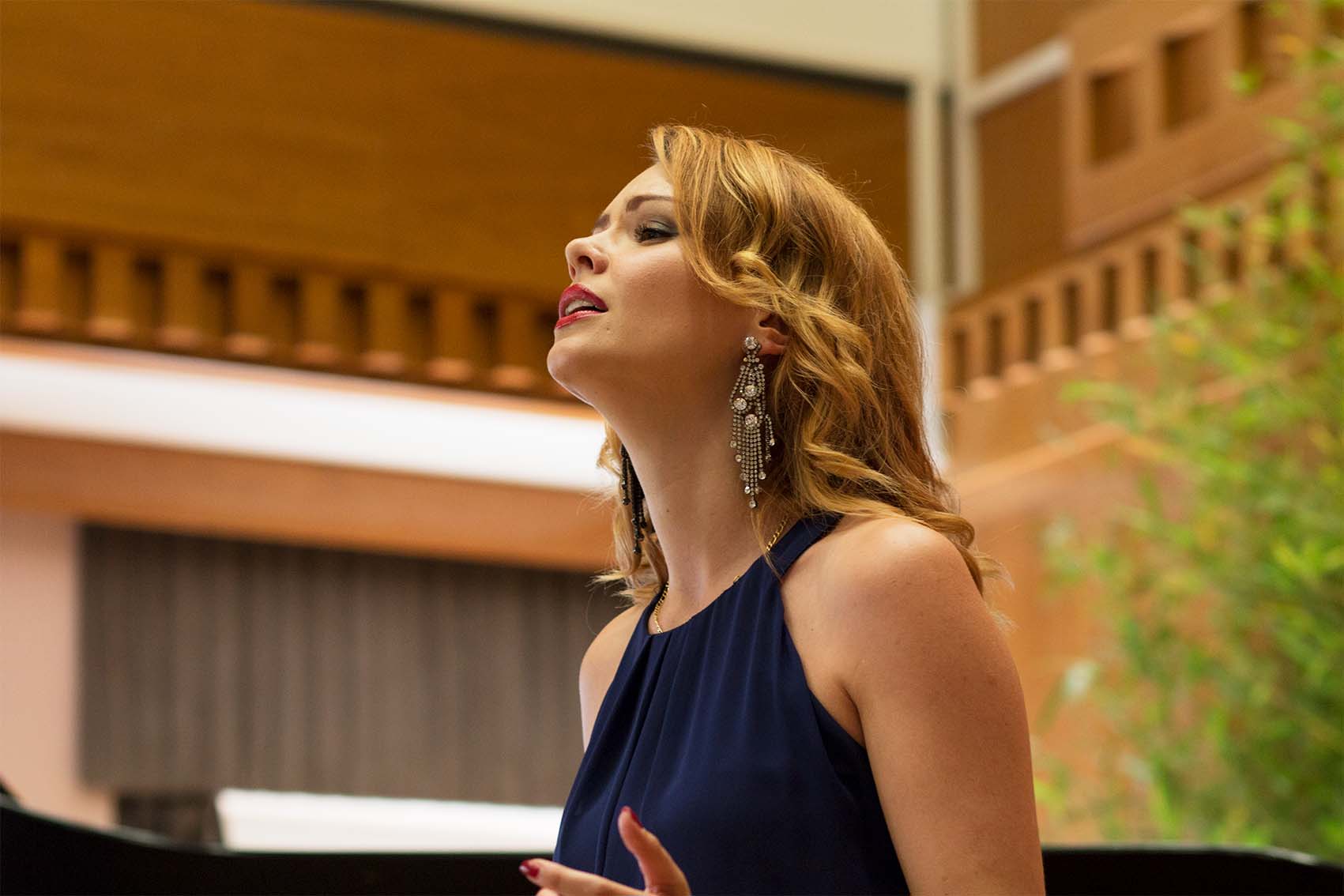 Rachael Birthisel, Soprano - a name you may not yet know, but certainly one to keep an ear open for. I first met Rachael close to 15 years ago at The University of Melbourne where we studied Italian together. Her journey has always been one that’s intrigued me.

With admiration (and perhaps a bit of jealousy!) I have watched her go from strength to strength; not only professionally, but as a determined young woman finding her way through life.

You see, Rachael made a bold choice many years ago that, in essence, set her career into motion. Rachael moved to Italy, leaving behind her family and friends, in search of a career she may not have been able to realise here in Australia.

Growing up on a cattle farm in Wollert, Rachael spent her childhood running free on her family’s property. At a young age she showed signs of creative finesse, taking dancing classes from the tender age of four. A true lover of performance, she continued to dance through her twenties, though it was her time at Epping Secondary College - and thanks to her supportive and encouraging Italian teachers - that Rachael’s flair for languages took hold. Not one to shy away from the possibilities provided to her, Rachael moved to Mill Park Secondary College in order to study Dance, Music and Drama in her senior years of highschool.

Keeping her passion for Italian alive on weekends at Saturday morning school, her studies saw her move on to The University of Melbourne where she began studying Arts before moving to Italy where she started classical music studies. “I was very lucky to win the Franco Schiavoni Memorial Scholarship, and I was inspired to go to Italy and spend some time there so I could really master the language and understand the culture better,” she explains. “After speaking to the Italian Co-ordinator at Melbourne University I was told if I studied 3 months at the Università per Stranieri di Siena I would get a year’s credit for my second year of Italian. I decided I had to go. I completed the B2 course and loved every minute of the experience. I came home in July 2007 and by January 2008 I was back on a plane but this time for good!”

Passionate about her craft, Rachael continued to delve deeper into the world of classical voice training, graduating from the Conservatory of Music of Bologna with a degree in Classical Voice while studying privately since in Prato with Mayumi Kuroki and Nicola Mottoran. Only last summer Rachael completed a course at the Academy of Belcanto Rodolfo Celletti, which she tells me was an amazing experience.

I ask Rachael what is it about this work - the singing, the performing, the hours of practice - that she loves so much? “I love being in the theatre and performing, and I always have,” she says. “I love taking on the character and becoming someone else for a little while. I get to be a Queen, a loved-up teenage boy, a crazy woman… the list goes on. I also love challenging myself and studying classical music. It’s a challenge that never ends. You can always improve, study harder, learn something new. It’s a hard part of my life, but it’s the part that keeps me going.”

Despite the challenges that working as a Soprano poses, Rachael continues to rise and overcome each new hurdle with grace and dignity. She has been lucky enough to travel the world with her voice, performing some of the most famous operas on the world’s most recognised stages. “I would say the two most amazing adventures have been the scholarship to the Bayreuth Wagner Festival, where I got to live and breathe Wagner for a whole week, and the Rodolfo Celletti Accademia del Belcanto, where I worked with the best teachers in the world, including Australia’s own Richard Bonynge in beautiful Martina Franca, Puglia.” There’s no stopping this young Soprano, as she continues to meet each new role head-on. Last summer she made her debut at the Festival della Valle D’Itria in Puglia, playing the role of Riccardo, a type of young ‘Don Giovanni’ and yes, she played the role of a boy. “In opera, a woman singing as a man is called a ‘pants role’, and it’s actually quite common, especially in Baroque music. I performed with an amazing cast in an old masseria (a traditional farmhouse) and we received great feedback and great reviews. It was such an amazing experience for me and I learnt so much.”

But what of Italy, her second home? “Italy is such a rich, crazy, beautiful country full of contrasts. There are so many different types of beauty, from the North to the South, and you sometimes find it hard to believe they can all be found in the one country,” Rachael shares, speaking fondly of the life she has established for herself. “The countryside is like a painting; the cities are full of history and the theatres are all so beautiful, even in the tiniest of towns. I don’t think I can say that I have a favourite place but I have always called Tuscany my home so it has a special place in my heart.”

Uprooting her native English-speaking life in exchange for an Italian-speaking one wouldn’t have been easy. Rachael’s love of Italian makes a world of difference in being able to speak the language where she is studying and working. “It makes my life a lot easier to be able to fully understand the Maestri, the courses I have had to follow, and to be able to communicate properly with people working with me. Also, I feel like language isn’t just ‘knowing’ the grammar and vocab. If you really learn the language well you understand that particular culture better, you understand how that group of people thinks and reasons about certain things, and it makes understanding others and your environment easier.” Italian set-up a solid language foundation upon which she has also learned to speak fluent Portuguese and some Spanish. “It was definitely much easier after learning Italian, and I do speak some Russian - but I’m fairly rusty,” Rachael admits.

So, what does the rest of the 2019 season hold for Rachael? “After my wedding in late May I plan on having a little bit of a holiday, then I will be back and ready for a new round of competitions this summer, and a concert in Martina Franca to receive a scholarship for being one of the best students at the Academy Rodolfo Celletti in 2018.” I ask Rachael if she has a sogno nel cassetto (a special dream) that she would like to realise in her career. “I would love to sing in some more Italian theatres,” she shares, “but also, I would love to sing in Australia! I would love to bring back what I have learnt here to Australian audiences and one day share it with younger singers.”

Despite the beauty that living in Italy brings to her life, living so far from home can be quite difficult for Rachael. “I miss my friends and family so much, especially since my two nieces were born. It is hard missing weddings, birthdays and also not being there when my grandparents passed away. I also miss the weather. I will never complain about Melbourne winters ever again, and I miss the long summers,” she adds. Sometimes, in order to achieve great things you need to make significant sacrifices. Irrespective of the things that are missing from her life in Italy, she is grateful for all the wonderful opportunities that this life choice has provided her. “I doubt I would have ever become an Opera singer if I stayed in Australia,” she admits quite candidly. “I wouldn’t have found my passion and learnt how to use my voice in such a way. I also would never have met my Pugliese husband, Domenico, or have adopted my rescue dog, Luna. I am also the person I am today because of my life experiences here. I am blessed to have a beautiful family and friends in Australia, too - so I really get the best of both worlds.”