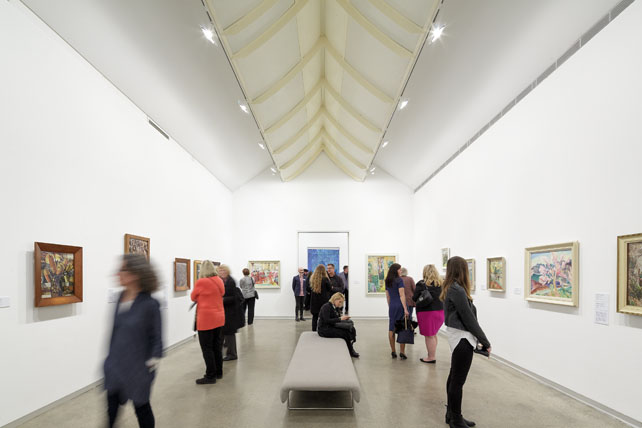 Heide: A Cluster of Three Jewels Amongst the Green.

If you have a flair for art, you’ll be familiar with the National Gallery of Victoria, the Ian Potter Centre and the Australian Centre for Contemporary Art (ACCA), but you may not have heard of Heide, the museum of Modern Art, Hidden in the hills of Bulleen, this museum will immerse you in contemporary Australian art. I have overlooked this jewel for too long. and now it’s time to see what I’ve been missing out on!

Heide consists of three separate buildings, emerging from parkland that also hosts the museum’s permanent collection. The building known as Heide I is where everything began in the ‘30s. Heide, in fact, is more than a museum; Heide is, first of all, a house. It tells the stories of a home and the people that lived in it.

The farmland cottagewas bought as a residence home by the wealthy art patrons John and Sunday Reed in 1934. They formed part of the circle of a new generation of artists as well as active membersof the Contemporary Art Society, an organisation whose objective was to give space and support to new ideas in visual art, in contrast to the more popular Australian tradition influenced by the European en plain air and Impressionist paintings.

Many of these artists were regular visitors to the home and Heide I became an important place of formation and experimentation. Between meals, cups of tea and the occasional love affair—the circle of artists built their careers and contributed to Australian modernism, in art and in literature (in the ‘40s John Reed, with the poet Max Harris, founded a cultural journal, Angry Penguins).

The Reeds would provide stipends to artists in exchange for their works. It was in this house that many artists’ careers were born. Among them were Sidney Nolan and Albert Tucker, who have reached international fame and are considered some of Australia’s most influential artists.

The entrance to the Museum is at what was once the homestead’s backdoor, and from here the art can be glimpsed through the windows, where a mural realised by Mirka Mora in 2010 welcomes visitors.

Inside, Heide I is  exhibiting work by Sidney Nolan, created during the 1940s. Conscripted by the Army, Nolan had to leave Heide I, where he was living,  to serve in the Wimmera. His creative activity would have been interrupted if it weren’t for the Reeds, who sent him materials so that he could continue his artistic research. The Reeds remind me of Theo Van Gogh, who supported his brother’s artistic work by sending him paints, canvases, money and whatever the genius needed. Like Vincent Van Gogh, Sidney Nolan rushed headlong into the canvas, into pieces of paper and other materials to reproduce the landscape in front of him. Nolan’s paintings of this period are characterised by a flat brush stroke and objects not precisely defined, in complete contrast to the style that predominated in Australia at that time. These and other works (portraits of S. Kilda in the ‘40s) are shown in all the rooms of Heide I, in an exhibition called Nolan at the Newsagent. This is, in fact, a collection of Nolan’s paintings that were exhibited at the Sheffield’s Newsagent (Heidelberg) in 1942, following Sunday Reed’s belief that art should not only be seen by visitors of a gallery or museum, but also by the wider community.

Nolan at the Newsagent is part of a vast retrospective titled Making History, a series of exhibitions dedicated to the artists who—as the name suggests—have written the history of Heide I.