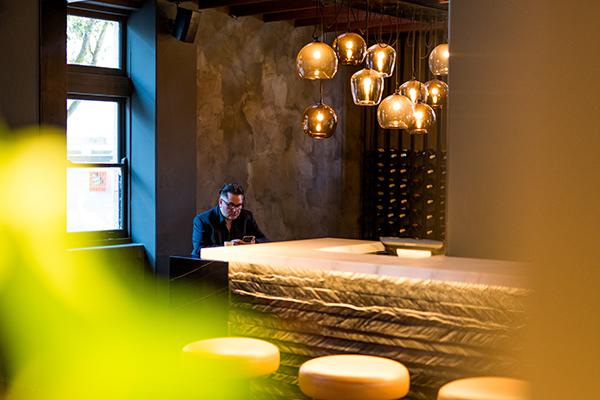 Celebrity chef and media personality Guy Grossi is arguably Australia’s Godfather of Italian cuisine. Over 60 years ago, Grossi’s late father Pietro opened the first of a series of renowned Italian eateries that have shaped the gastronomical landscape of Melbourne.

Guy Grossi’s extensive knowledge of authentic Italian regional cuisine, along with his ability to put his knowledge into practice, have put restaurants Grossi Florentino and Merchant Osteria Veneta on the map. Grossi, the presenter of The Italian Food Safari, has recently established the restaurant Garum marking his first Australian venture outside of his native Melbourne. Located in Perth’s historic Hibernian Place as part of the new Westin Perth Hotel precinct, Garum pays homage to Roman cuisine.

Grossi reveals it was the historic Hibernian Hall, where Garum is situated, that inspired him to pursue a Roman-themed restaurant. ‘The Old Hibernian Hall was built in 1902, and has a big connection to the Irish Catholic community and Roman Catholic community’, says Grossi. ‘Hibernian was the name that the Ancient Romans called the Irish, so this place kept on giving me this bit of a Roman feel and it’s also very Italian in its architecture, so I thought ‘it’s a Roman restaurant’. I have always liked Roman food and because of the place and the concept and how it all evolved, I think it’s a really nice way to just have an Italian restaurant that is really specialised’.

When one thinks of Roman cuisine, dishes such as Pasta Cacio e Pepe and Spaghetti alla Carbonara immediately come to mind. Few would immediately think of Garum, the ancient Roman fish sauce for which Grossi’s Perth restaurant is named. But it is Grossi’s ability to showcase both the well-known and more obscure Italian dishes in his established eateries that has made him one of Australia’s top restaurateurs, and Garum is no exception.

Grossi describes Garum’s offerings as a combination of Classic Roman cuisine with some Ancient Roman influence. ‘it’s not about bringing Melbourne to Perth’, explains Grossi. ‘it’s about highlighting and showcasing the great producers of Western Australia, the great ingredients here and doing it through, I guess, a Roman eye’. Classic dishes on the menu include Bucatini all’Amatricana, Fettucine alla Carbonara and Cacio e Pepe, while the ancient Roman influences seeps through in the Garum and Colatura sauces, Pagnotta, (an Ancient Roman shaped bread loaf) and offal. ‘Roman cooking has a special plate for offal and we’ve got the Vaccinara on at the moment which is with oxtail, sultanas, pine nuts and chocolate. We had some people going, ‘oh it won’t sell very well’ and we’ve gone, ‘you know what, we’ll give it a crack’. And it’s been selling well’, he says beaming.

The ancient Roman emphasis even seeps through on the cocktail list, with Grossi’s personal favourite, the Posca. ‘It’s inspired by the Ancient Romans who used to mix vinegar and give it to their soldiers. It was their drink, so we created it as a little cocktail and it’s really refreshing’, he says.

While Grossi will continue to travel between Perth and Melbourne to manage his restaurants he has entrusted Mario Di Natale as Head Chef at Garum. ‘Mario’s been with us for about eight years and he’s been Head Chef of the Grill (at Grossi Fiorentino), and he’s done other projects with us. He’s a very capable young man and he loves his food and he loves the approach of just fresh ingredients and local producers. I think it’s in good hands’.

With the Roman flavours of Garum, the Tuscan cuisine of Grossi Florentino and the dishes of his mother’s birthplace Veneto at Merchant Osteria Veneta, Grossi is yet to open a restaurant that focuses on Southern Italian regional cuisine or his late father’s Apulian heritage - but he hasn’t ruled it out. ‘My father was from Puglia, so you know I have an affiliation with the food there…I really love the food of the South. There are no plans at the moment but that is something that I think would work really well’.

In addition to running a string of highly successful restaurants, Grossi has also shared his extensive knowledge of Italian cuisine on a number of television programs including Italian Food Safari and My Kitchen Rules, and has also penned a series of successful cookbooks including Love Italy and Recipes from My Mother’s Kitchen. While the popular chef remained tight-lipped about any future television projects, he is launching a new cookbook that focuses on another of his Melbourne establishments, The Cellar Bar. ‘Cellar Bar in Melbourne has a more broader sort of type of Italian cooking. It’s mainly focused on pasta, so pasta is from many regions’. The book which is due out in October boasts 80 authentic Italian recipes from the Melbourne hotspot.

For someone who has been surrounded by the hospitality industry all his life, Grossi seems just as passionate as ever. When asked what continues to inspire him in the kitchen, he responds, ‘Working with great professionals and people that enjoy quality, and that whole aspect of doing something that pleases other people delivering hospitality and delighting people’.

Grossi believes it’s an exciting time in the hospitality industry where patrons Australia wide are showing a renewed interest in food and cooking marking an exciting time for Australia’s gastronomical landscape. ‘People are definitely more interested as time goes on. I think we’ve become a very busy society and at some point and I think people sort of stopped worrying about cooking and moved away from the family table. But I think the whole country has really shown that there’s a push back towards, great food. Once upon a time, people didn’t have time for it, whereas now people are making time for it”.