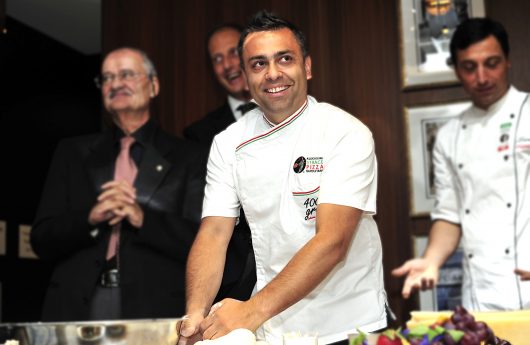 There’s been a lot of hype about him, but Johnny Di Francesco’s is not a rags to riches story. Rather, it is a straightforward ‘work hard and make your own luck’ type of tale. According to him, achieving your goals depends on working hard and smart, consistently and persistently. Johnny’s level of success is something special, though.

Today I met Di Francesco, the owner of three of Melbourne’s most smashing pizzerias: 400 Gradi in Brunswick, Gradi at Crown and Gradi at Essendon. It was soon clear that I was talking to someone who had found his passion and worked hard for years driving that passion into a fulfilling career and attaining a solid sense of self in this bewildering world.

Johnny delved into Melbourne’s hospitality industry in his late teens, blundering into various restaurant ventures, which saw their share of sweat and tears. He had to sell his early pizzeria’s because he underestimated the business side of the venture, and it took a while to realise that it would take more than just great pizza to make a restaurant successful. “I have learnt more from my failures than I have from anything I have succeeded in,” says Johnny. He describes his path to success as eliminating his mistakes at each stage. He has become a fastidious student of the hospitality industry and has learnt what makes a business profitable.

Now in his 23rd year in the food and hospitality industry, Johnny has come a long way from his humble beginnings. In 2014, his pizza margherita was awarded first place in the prestigious Campionato Mondiale della Pizza (Pizza World Championship), in Parma, Italy. Johnny was catapulted onto the world stage as ‘The Australian Pizzaiolo’. The exposure had an immediate positive impact on his business. Gradi expanded to two new locations: Crown Casino in South Bank and Essendon. He wrote a cookbook: “World’s Best Pizza”.Furthermore, Johnny took part in several key overseas events such as the Milan Expo, Parizza in France and New Zealand Fine Foods, running pizza competitions and mentoring pizza chefs in the craft of traditional Neapolitan pizza.

Australia’s top pizzaiolo is currently mentoring aspiring chefs, and, to some extent, educating diners to focus on quality food, encouraging them to make it and to demand it. “Australians are traveling all the time, and chefs here have to work harder to produce high quality dishes like (in) Europe,” he says. There may always be five-dollar pizza places, but it is his hope that the food industry in Australia will one day place greater value in a quality-driven market instead of one that is price-driven.

After last year’s victory, Johnny shows no signs of slowing down. He also professes that memories of difficult days in his early career are powerful reminders that he is still in the driver’s seat and focus is paramount. “Despite what others think, my career hasn’t always been rosy. I still remember the first ten years of very hard times in my business. I never want to go back there. So I want to continue to work hard to make sure that I continue this success going forward,” he admits. Johnny is in his element. He is working off the momentum built from his recent achievements, and is determined to keep moving forward.

What has success meant for his family and personal life? It has enabled him the means to provide his family with the opportunity to explore their own interests. “I want my three children to take their own paths. I will support it. For instance, my daughter, she loves music- I tell her, ‘if you love it then do it.’ My son, he loves his soccer. A league in Italy has picked him up. It is about living your dream and seeing where it takes you. In addition, if you put one hundred per cent in what you want to do, – you really strive, and you really believe that that is what you want- then it will happen. I say that to my son,” Johnny says.

As for how he feels about his family living abroad, Johnny concedes, “It has its effects. Any spare time, I try to spend time with them as much as possible. I look at it as a life experience for all three of my children. They get to experience a different culture and live a different life. They get to embrace my wife’s heritage and mine – the Italian background in us. I think it is beautiful that my children can say that they lived in Italy for a while.”

Alas, Johnny ponders the question: how do you balance career, family and personal life? “I probably haven’t achieved that, and that’s possibly my next goal. We’ll probably get there one day, but it’s going to take time,” he says candidly, examining his personal life and acknowledging that there is room for improvement. He’s achieved the balance of flavours between mozzarella, tomato, and basil, on his pizza Margherita, the balance between book-keeping and gastronomy in his business.

It is not hard to imagine the goal-oriented restaurateur achieving the perfect balance in life’s trifecta.