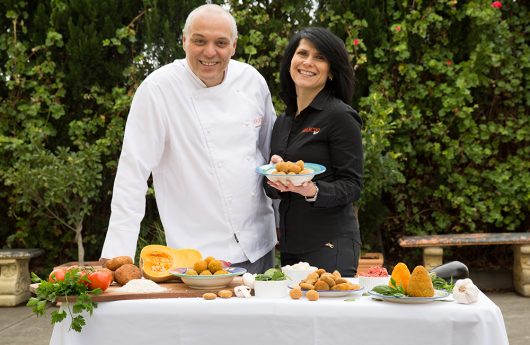 The "art" of making arancini

Based in Epping, Arancini Art is a food company specialised in producing traditional Italian Arancini, Olive Ascolane (stuffed olives), and Supplì. It began from the idea of the Sicilian Riccardo Siligato and her wife Josanne, aiming to share their innate passion for the islander cuisine in Australia.

As the owner explains, all the childhood memories that have accompanied him in his Australian adventures, have effectively shaped his present and strengthened his bond with the home land.

Over the years, Riccardo and Josanne had planned several trips to Sicily and, as luck would have it, they eventually learnt the art of making Arancini directly from Severino Bucalo, master chef of Arancini on the island.After having gained the skills, their friend Adrian Lo Giudice, owner of a construction company in Melbourne, provided the Siligatos with a warehouse that soon turned into a laboratory. “Without his help this dream would not have been possible,” Riccardo states.

At the beginning they cooked for three days, while spending the rest of the week doing deliveries.With the help of Gerry, the new entry in the kitchen and thanks to the arrival of the team of Massimo Minutoli, new manager and salesman, the gradual increase in orders turned the initial part time enterprise’s into a proper full time job. Massimo’s contribution in particular, has represented the strong point at Arancini Art and the step towards a big scale production that has seen the extension of sales throughtout Australia and New Zealand.

“I could never be more proud of my team and my wife. Their help has been fundamental to settle a business that is running productively for over six years now.”Through professionalism, passion and dedication, the company has grown a lot, but the priority to offer high standard service and quality remains.

All the products at Arancini Art are hand made daily with passion, and as Riccardo highlights, “with art.” The selection of food also includes; pasta such as lasagne and fettuccine, several appetisers such as potatoes croquettes and mozzarella fried balls, plus customised recipes made on request according to the customer’s palate. Needless to say, the ingredients are all bought locally to guarantee the highest quality.

CURIOUS FACTS ABOUT ARANCINIArancini look like big rice balls, about the size of an orange (the Italian world arancia means “orange”), whose center is filled with a savory mixture. The outer layer is covered with a crunchy crust and the entire rice ball is then fried in oil.The classic Arancini and Supplì, the first having originated in Sicily, the second in Rome, come in two main variants: the first is perfectly round in shape, filled, according to the tradition, with a ragu sauce of meat, mozzarella and peas; the second one has a longer, pearlike shape and is generally filled with diced mozzarella, prosciutto, and grated cheese.Nowadays the ones made in Western Sicily are round in shape whilst those made in Eastern Sicily (particularly around Catania) are often conical.For several centuries the Arancino has been part of traditional Southern Italian cuisine. As far as we know the term “Arancino” was first coined in Sicily. There are even those who sustain that Milan’s signature dish of Saffron Risotto is nothing more than a poorly executed arancino that fell apart on a plate, although Milanesi wouldn’t agree with that.

The cultivation of rice in Sicily had no connection with rice farming in Piedmont, where arborio and other rice varieties are still grown. So, how did rice arrive in Sicily?As well as oranges, it was introduced there during the Arab period. The island had a cooler climate back then, with streams flowing all year round, navigable rivers and natural lakes, an environment that allowed the rice’s growth.All throughout Southern Italy it is common to find street vendors that sell Arancini.The consumption of this millenary dish, doubles during the festival of Saint Lucia in Palermo, on December 13th. On that special occasion, the city fills up with stands, carts and frying kiosks selling hundreds of Arancini, as, according to a vow made to the Saint during a severe famine that hit the island in the 17th century, the consumption of pasta is forbidden.