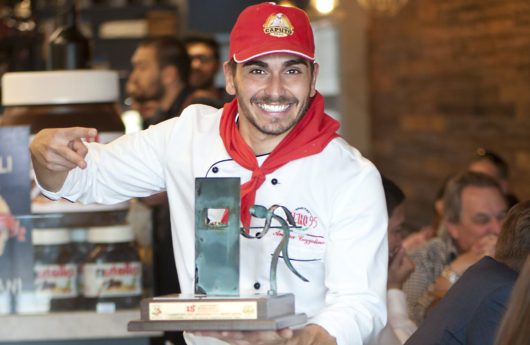 Andrea Cozzolino’s passion for the art of pizza making – and yes, it is quite an art – began in Naples during his school-age years. Andrea was just twelve years old. It all started quite modestly, working at a local family-run pizzeria, making simple pizzas, preparing ingredients and feeding the staff.

By the age of fifteen he knew he had found his calling in life and finished school. As a result, Andrea has dedicated the last ten years to pizza. And guess what? He couldn’t be happier.

We giggled our way through his life story, sign-posted with the expected mention of ‘concerned but supportive parents’, a courageous (and somewhat spontaneous) story of migration to Australia, and lots of pizza.

After various stints working in famous pizzerie in Naples on Elba Island and in Udine, Andrea moved to Australia when he was twenty, leaving behind his parents and all that was familiar. “I don’t even speak English! What am I doing?” he had asked himself. As it turns out, the risk was worth it.

Andrea’s story is much happier than many other young Italian migration stories today. He was never without work, though he did need to establish a friendship base here in Melbourne. Enter at this point his friend, ‘Ciccio’ – aka Francesco Crifò. Francesco and Andrea met as colleagues before opening ‘Zero 95’, a pizzeria in Melbourne’s Doncaster East. Andrea speaks of Francesco with great affection and respect. “To me, he isn’t just a business partner. To me, he’s family,” he gushes.

“Italy is famous for it’s food, right? Sicily is famous for cannoli, Bologna is famous for mortadella, and Parma is famous for prosciutto… Naples is famous for pizza.” During the past ten years Andrea has competed in many pizza-making competitions, the most important being the Caputo Cup in Naples. This year Andrea returned to his beloved Naples and took part in the prestigious competition. He managed to take out the championship title, crowned the 2016 World Pizza Champion, beating over 600 international competitors.

Naturally, when in the presence of such an expert, curiosity gets the better of you. I couldn’t help but ask what makes for a truly authentic pizza.

Time. The dough proves for more than twenty-four hours.

I came away from my time with Andrea in awe of the dedication and commitment he brings to his work. He lives and breathes pizza, and cherishes the joy he brings to people at the table. What struck me most about Andrea is his humility. Andrea acknowledges the support and time invested in him by colleagues and friends that have helped him reach this new level of success. Reflecting on this incredible achievement Andrea says, “Everyday I still work to improve, to get better and learn more.” This is not the end-point of success for Andrea, rather a departure for this talented, passionate pizzaiolo.