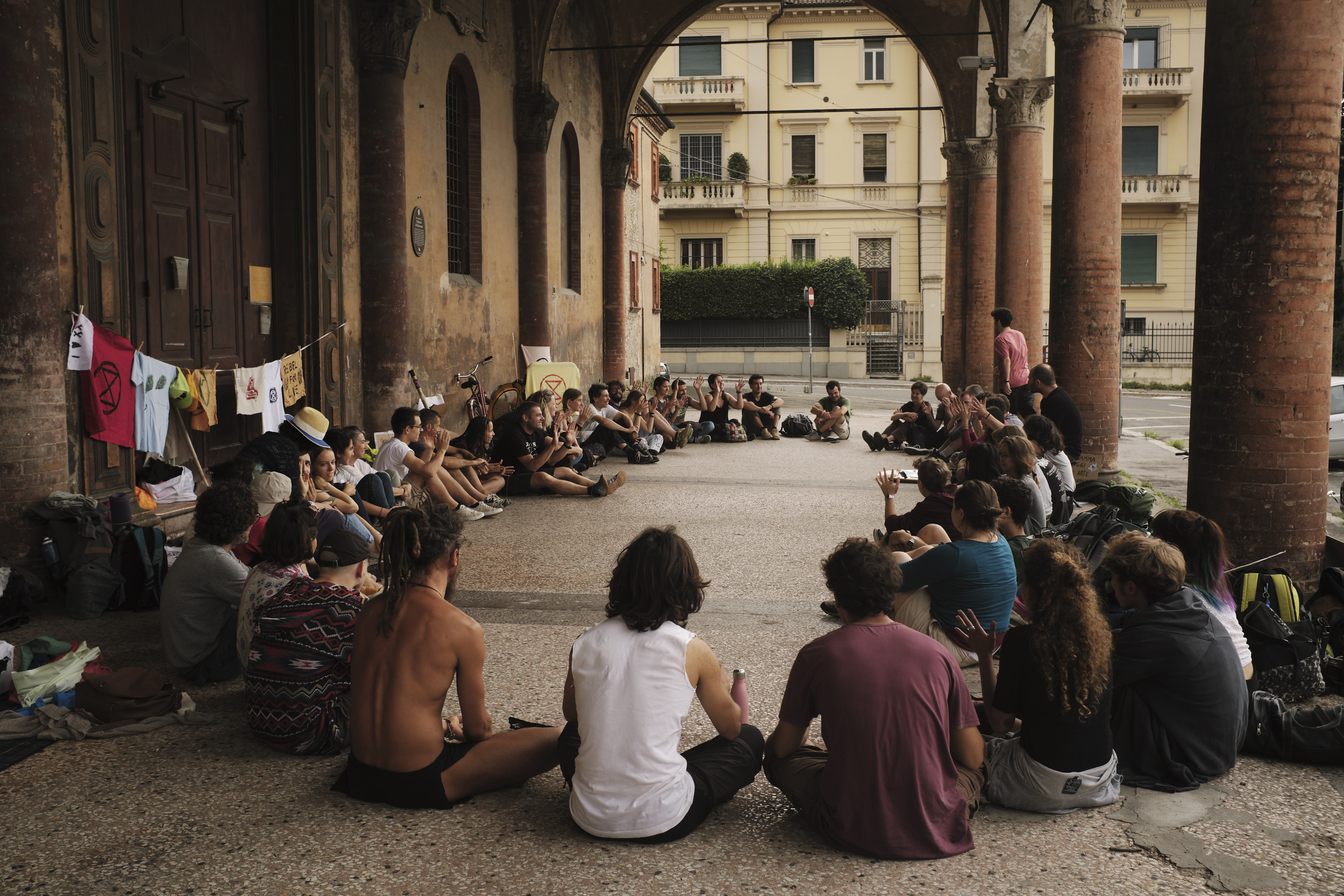 David Attenborough, Pope Frances, and Al Gore. These household names might not have much in common, but they are all speaking the views of a growing proportion of ordinary people, who are becoming ever more concerned about the state of our planet. (Photo - Extinction Rebellion movement in Italy. A group of activists in Bologna)

It has become the norm to notice people using reusable bags, keep-cups, and paying attention to their travel habits. It is, however, also becoming more widely accepted that individual behavioral changes will not be enough to get us out of this mess. Many of us are becoming more outspoken about the need for systemic change.

Before our recent federal election in Australia, more than 80% of voters said that they thought that our Government was not doing enough to fight climate change. The media was calling it ‘The Climate Election’, but months have passed since new Government has formed, and according to Miriam Robinson, Australian representative of the Extinction Rebellion movement, neither of the major parties has proposed sufficient action for the environment.

In Australia (Climate Change), has become quite partisan,’ says Miriam. ‘With Extinction Rebellion, the idea is to create a mass civil disobedience uprising. Here in Australia, for many years we’ve had people stopping different projects, but there is no more time for these dedicated people to be out, living in trees, working on little projects. The idea now is to get normal people, grannies, families, students… all types of people, to rise up and get involved in civil disobedience.  We are aiming to get 3.5% of the population actively involved, because this is the number that has been shown to initiate changes in policy.’

Extinction Rebellion is a Global Movement that began in the UK in 2018, and has since produced the publication ‘This is Not a Drill.’ They are inspired by other global grassroots movements such as Occupy, and aim to mobilise the population into urgent action to address the climate and ecological emergencies.

Marco Bertaglia, representative of the Extinction Rebellion movement in Italy, is a working environmental scientist. His involvement with Extinction Rebellion came about because he has been worried for many years, and is more aware than most that we are running out of time. He was eager to give a voice to the demands of this global movement, which are that; Governments tell the truth about the Climate and Ecological Crises, and that immediate action be taken to halt the effects of the climate and ecological crises.

Distinguishing the climate crisis from the ecological crisis is important to the Extinction Rebellion movement. As Miriam explains, ‘you can plant a pine tree plantation, and that will help to reduce carbon, but it does nothing to protect biodiversity.’ She goes on to explain that the extinction of animals, including bees is directly related to use of pesticides, herbicides and the loss of biodiversity. ‘We could fix the climate,’ she explains. ‘but we could still be seeing all this extinction and loss of biodiversity.’

Marco agrees, and he too presses the importance of the ecological crisis.

‘This is our last chance,’ he says. ‘We have seen that holding marches for one day doesn’t work, (civil disobedience) must continue day after day.’

By definition, civil disobedience is a non-violent refusal to obey laws for the purpose of protest. On the 7th of August, The Guardian reported that 56 protesters between the ages of 19 and 72 had been arrested in Brisbane for obstructing traffic. They were protesting government inaction on the climate and ecological crises with particular attention to the approval of the Adani coal mine in North Queensland.

Marco says that this type of disruption is the only way forward, citing British Greens MEP Molly Scott Cato, who says:

‘A powerful alliance of wealthy individuals and multinational corporations, backed by complicit politicians, has subverted the political process and blocked action. This is why, whoever we are and whatever we do, we are coming together now to say we are prepared to engage in civil disobedience to force urgent climate action.’

Marco is passionate about the cause but he is understandably nervous about civil disobedience in Italy. ‘Police in Italy are not necessarily as nice as London’, he says. ‘We have a government in Italy that is reverting back to fascism, and that is a problem. People are afraid to protest.’

Extinction Rebellion Italy will nonetheless be participating in Global Action on 7th October. It’s a movement that in Europe is being called ‘Rebels Without Borders’ where smaller groups are coming together in the capitals to create major disruption. ‘We have decided to participate in the international action,’ says Marco, ‘because we need to be participating in the action to attract people.’


In Australia the action planned for October is to be known as the ‘Spring Rebellion’ and Miriam says it could go on for a few weeks.
‘We will be supporting the school strikers in September, but the kids will lead, and we will support,’ she says. ‘Then we will be looking at participating in global action in all of our Capital cities.’

Both Marco and Miriam insist that change cannot be achieved without major systemic overhaul, and that this means that people need to come together.

‘Individual action has not been sufficient’, Marco says, and he is adamant that this particular burden should not fall on the shoulders of the individual. ‘We live in a toxic system, but no single person is to blame.’