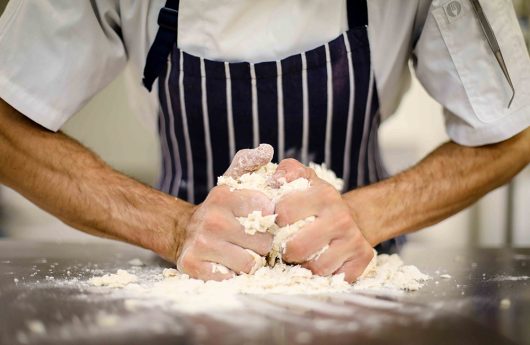 Every day at dawn, thirty-two year old Domenico De Marco gets on his racing bike and rides it through the beautiful parkland surrounding Hepburn Springs, a lovely country town famous for its mineral springs, 128 km north-west of Melbourne.

Every day at dawn, thirty-two year old Domenico De Marco gets on his racing bike and rides it through the beautiful parkland surrounding Hepburn Springs, a lovely country town famous for its mineral springs, 128 km north-west of Melbourne.

He is as happy as a young man can be. The wonderful scenery, the exhilarating scent of nature, the sun rising on the horizon makes him feel he is living in the Garden of Eden. How did he get there? Metaphorically speaking, the angel with a flaming sword guarding its entrance must have turned a blind eye. A reality check, of course, tells another story. He worked his way through a number of challenges, the most daring was when he decided to leave Italy and try his luck in Australia.

In the last few years, many young Italians have pursued the same dream but it is hard these days starting a career and becoming a permanent resident in this country. Most of them, even those with a very good education, end up working as waiters and eventually resign themselves to go back to their homeland. Domenico instead came as a qualified chef and, despite his young age, with a background to make the best Aussie chefs envious.

Born in Milan from Calabrian parents and raised in Imola - the town in northern Italy that once used to host a Formula One Grand Prix - he studied at a hospitality college in Bologna getting a diploma in professional cookery. After a short experience in a Rome restaurant, he worked under some of the most accomplished Italian chefs including Luca Marchini at ristorante"L'Erba del Re" in Modena, and Piergiorgio Parini at the"Osteria Del Povero Diavolo" in Torriana, a hill town of Romagna from whose ancient tower one can have a breathtaking view on the coast of Rimini.

He completed his professional training in three of the most acclaimed restaurants in Southern Italy: the 5-star Hotel San Pietro in Positano, the"Pappacarbone" in Cava de' Tirreni, and the"S'apposentu" in the charming Sardinian village of Siddi, at the centre of the archeologically-renowned area of Marmilla.

He then worked at two other top restaurants, one in Florence and Prague: both linked to the Four Seasons Hotels chain and made famous by the Italian master chef Andrea Accordi. Notable in his career are the restaurants where he worked before coming to Australia, all star-rated in the prestigious Michelin Guide.

An impressive professional pedigree allowed him to be immediately hired after arriving in Sydney six years ago, first by the Hilton Hotel Glass Brasserie, followed by the Sardinian cuisine restaurant"Pilu" in the Sydney northern suburb of Freshwater. A favourable opportunity of starting his own business brought him to Melbourne where he became head chef and owner of the restaurant"L'altro mondo" in Albert Park. Nonetheless destiny had something else in store for him, something that would take him to another dimension of life, still requiring his culinary knowledge and skills but in a unique environment.

It came about after an enterprising man called Ian Hawkins and his wife Jodie bought an old guest house in Hepburn Springs called the Grande Hotel. Ian has an extraordinary story of his own that goes beyond the scope of this feature. Suffice to say, well into his adulthood he learned that he had been adopted shortly after he was born in Perth to an Australian woman and an Italian man.

They were both very young and broke their relationship when his mother became pregnant. Unable to take care of him, she gave him away for adoption. Some time later, his natural parents got back together, married and had other children. Ian was able to trace them back and reunite with them in Perth. He also visited his father's birthplace in Italy near Como.

Possibly the discovery of having some Italian blood in his veins had some influence in Ian's idea of involving Domenico in his Hepburn Springs business venture. He had been looking for somebody able to develop a good reputation for his guest house restaurant. When he met Domenico he was sure he had found the right person. He had to wait a short time, Domenico had recently bought the restaurant in Albert Park and couldn't adhere immediately to Ian's proposal. He was definitely attracted to it especially after seeing the guest house, its exclusive location and its development potential.

Domenico eventually sold his restaurant, signed a partnership agreement with Ian and moved to Hepburn Springs. He couldn't resist the temptation of applying his skills to a life in a place he had been dreaming of since finishing his studies. He had worked in some of the best restaurants in Italy and had lived in superb locations across the Italian peninsula but none conquered his heart as Hepburn Springs.

The Grande Hotel has ten guest rooms with ensuites that have been newly refurbished in a warm and homely style. Breakfast is served on request in the large hotel balcony overlooking a lush forest. The restaurant - called "Locale" - is Domenico's domain and whatever is offered in the menu is made by him, from bread to pasta, deli meats, gelato and cakes.

During his early morning cycling tours, he makes a few stops to order raw ingredients from local farmers and traders. By midmorning he is back at the hotel, takes off his cycling attire, has a shower and gets into his creative mode. The hotel staff including Ian know that he must not be distracted when he is at work in the kitchen. He can often be heard singing aloud an Italian opera aria or a Neapolitan song while he is busy with cooking. It's his way of releasing the pressure from his job.

He should add to his repertoire a once famous song from an American musical. The melody was taken from music written by the Russian composer Alexander Borodin. It's titled "Stranger in Paradise" and the lyrics have a striking resemblance with Domenico's experience in Hepburn Springs.