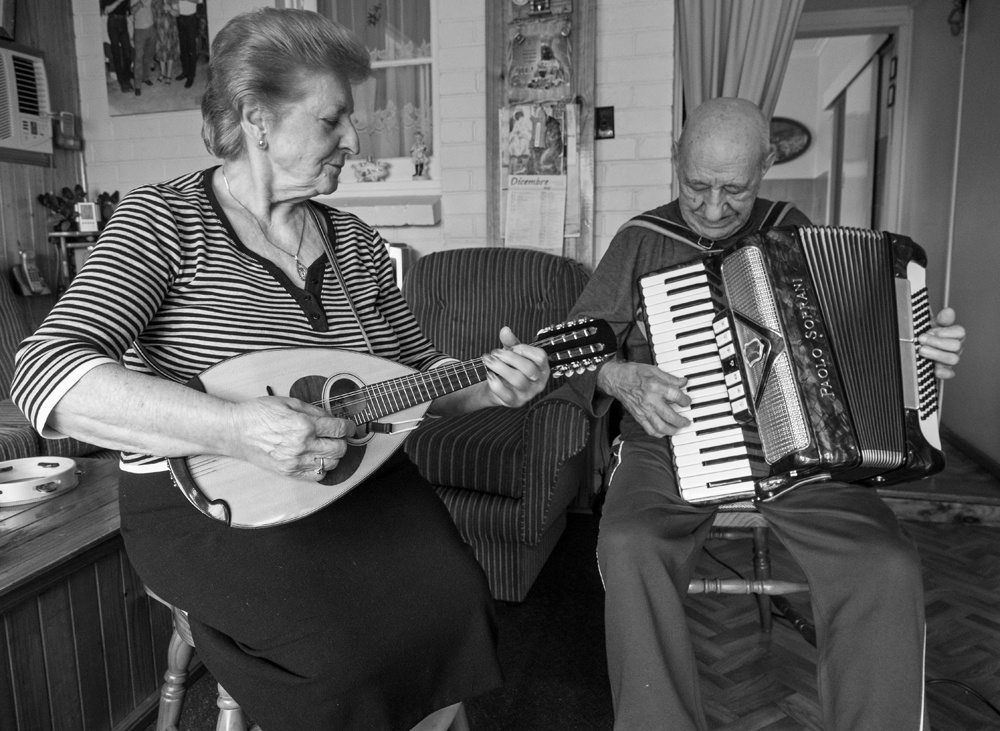 Dora and Angelo, leading the revival of Italian folk music in Melbourne

On stage they are mesmerising. She is perfectly coiffed. Her hairstyle defies gravity. The genuine, warm smile never leaves her face. He sits on the seat beside her with his accordion balanced on his lap, looking over to her regularly. (Photo Salvatore Rossano)

She is the one with the incredible memory, and together it seems their repertoire is infinite as she picks out the melodies on her mandolin.

Dora and Angelo Marchese, well into their eighties, are again making their mark on Melbourne’s Italian music scene. Their songs are touching the hearts of audiences throughout the city, and so is their story.

The pair met when they were just ten years old, at music school. The only thing was, ‘music school’, in the town of Viggiano where both Dora and Angelo are from, happened to be the home of a local bricklayer named Marco who knew how to play a bit of mandolin, and dabbled in the accordion.

Dora was drawn to the mandolin from a young age. She was interviewed by Salvatore Rossano for the National Library Folklore Archives, and during this conversation she remembers how she loved to listen to visiting music ensembles.

‘I would always sit closest to the mandolin’ she laughs.

She showed a lot of talent at a young age, and it wasn’t long before she’d outgrown her teacher, who acknowledged that if she wanted to learn more, it would need to be at the conservatorium of music.

Attitudes towards women and education at the time meant that this wasn’t to be, but Dora, in her own way, was quite an unconventional woman. When Angelo was sent to military service, Dora decided to migrate to Australia on her own. After settling there, she sent for her childhood sweetheart, taking advantage of the legislation of the time that allowed ‘chain migration’.

Usually, a man would migrate to Australia, find employment and a suitable place to live, before sending for a wife from his own village. Sometimes they would be married ‘by proxy’ in Italy, with someone standing in for the absent groom. An estimated 12,000 Italian women migrated to Australia this way. Of the men who did so, there is no statistic recorded. I know only of Angelo.

The last time I watched the couple play, Dora came over to sit next to me after the performance. She always asks about my children, remembering the way my son terrified her by leaping from one of her couches to another when he visited her home with his father.

‘I stopped playing when mine were that age,’ she tells me. ‘And then, when they were grown up, my mandolin was high up on a shelf and Angelo said to me “Will you get that mandolin down?” and I said, “I won’t remember anything,” but actually, I remembered better than before!’

The couple began playing together throughout Melbourne as they approached retirement, and after. They are no strangers to the Melbourne music scene, but recently have given different audiences the opportunity to listen to their beautiful, vast repertoire, in a variety of different ways.


At the first edition of the Taranta Festival, an initiative designed to engage new migrants, Dora and Angelo, with their friend and colleague Raffaele Basso played as a support act, for the headlining act Canzoniere Grecanico Salentino, along with local group Vardos Trio. As experienced as Dora and Angelo are, they were a new act to many audience members that night, who could not help but be charmed by their warm stage presence, musical virtuosity and immense repertoire of very old, very beautiful traditional songs.

More frequently I am beginning to see their faces amongst the audiences and on stage at Italian folk events in Melbourne, a relatively new scene that has been built up during the past five years through the efforts of groups such as the Rustica Project, Sanacori Ensemble and Santa Taranta, all led by young migrants passionate about diffusing Italian folk music in Melbourne. Perhaps the scene was missing, however, a vital link to the established Italian migrant community in Melbourne. This is why the opportunity to meet and collaborate with such warm and generous musicians as Dora and Angelo Marchese has been met with enthusiasm. While we seek to renew the traditions, and give new life to old songs, we are fortunate to have access to living memory, people who play traditional music as they remember it. Dora and Angelo are revered in this community, known as the warm-hearted couple of many songs and many precious musical memories.