No items found.
Product is not available in this quantity.
LoginLogoutSubscribe
Travel 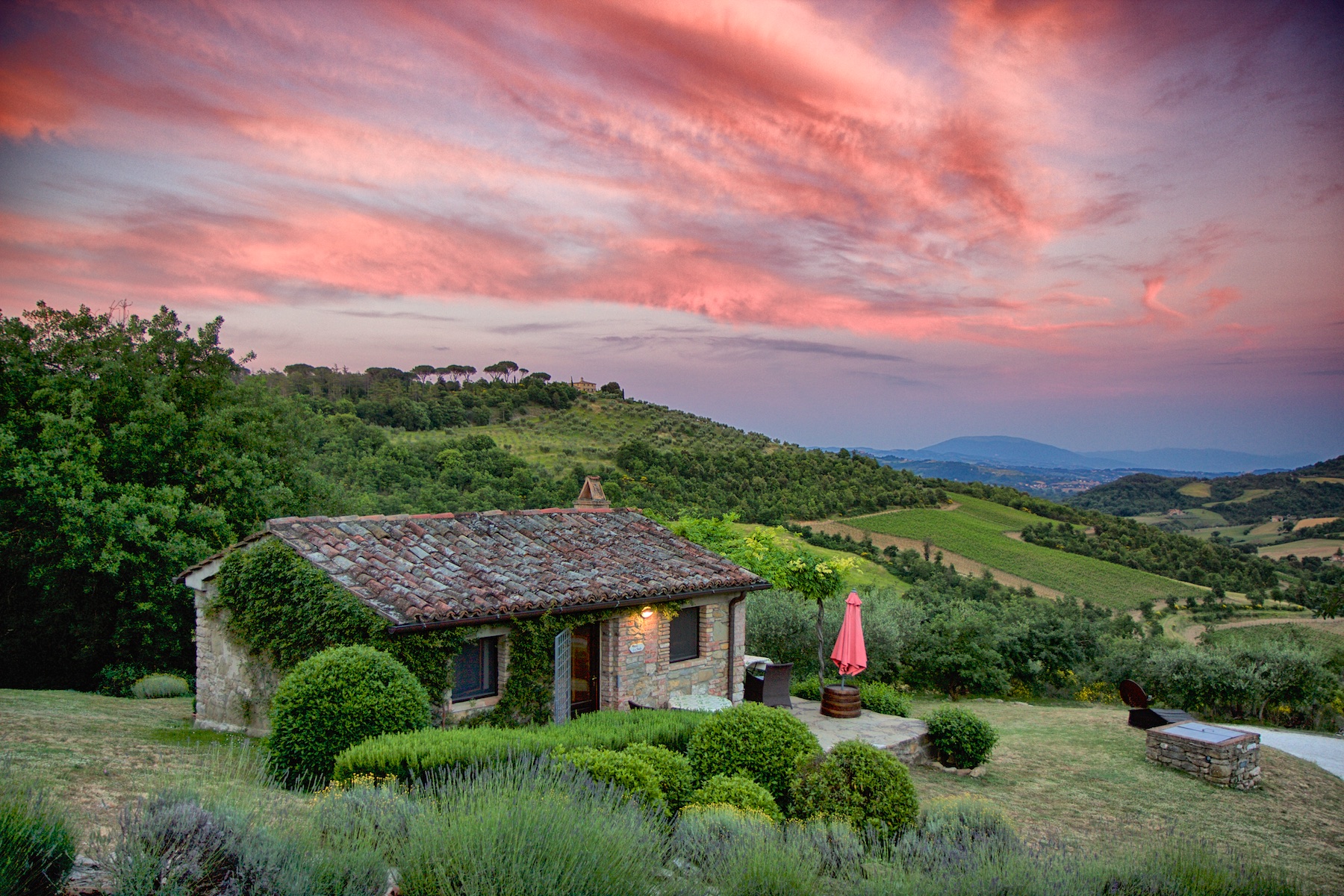 CASA SAN GABRIEL, WHERE DAVID AND CHRISSIE SHARE THEIR DREAM TO LIVE THE SIMPLE LIFE

Almost every day in Italy, there are stories on the radio of young Italians who left their country and travelled to Australia in search of a better life. Many rarely return, if at all. But we don’t hear as much about the Australians who have chosen to reverse the process and end of up living in Italy permanently.

Their reasons for doings so are diverse, a quest for a certain lifestyle, good old-fashioned love or the ability to spend a considerable part of the year introducing others to a country they have come to love.

Nestled in the small Italian region of Umbria lies Casa San Gabriel, a picture-perfect property with breath-taking views.  But it was once desolate and rundown, part of an agricultural estate that has taken a large amount of love and patience to transform in a cherished home and a haven for travellers.

When David and Chrissie married, it was their dream to live the simple life. ‘For most of us, that would mean finding a spot free of urban madness, but one from which we could access work, family, friends and some entertainment’, said David. For the Langs, it involved moving across the world and a search for the right property. Their logic, surprising as it may sound, was that if they lived in Australia, it wouldn’t be fair to Chrissie as she would be so far from her home in the UK and vice versa. If they found somewhere in the middle, it shouldn’t be too hard to convince both families and friends to come and visit. Chrissie obviously won.

David’s love affair with Italy grew out of what many would have regarded as a challenging time, the housing of Italian prisoners of war during the second World War. David’s father grew up on a sheep farm between the small country towns of Beeac and Cressy, in Victoria’s western district. Towards the end of the war, several Italian prisoners worked on the family farm and lived in the shearer’s quarters. ‘My grandfather got along well with the Italians. They were good workers and good people. Grandad even loaned them a gun so they could hunt rabbits’, David says. The POW’s were repatriated at the end of the war back to their homes. Many were from Campania, Basilicata and Molise and a number subsequently returned with their families as migrants. David’s family continued its connection with them, renting land for them to grow potatoes and onions. ‘I have known Italians from a young age. In our local town, it is difficult not to meet Italians related to these early migrants’, he says.

They had undertaken a six-month trip to South America and during that time they spent a lot of time thinking about the next step in their lives.  We were inspired after visiting Hacienda San Gabriel in Mexico, admiring it is combination of place, style and hospitality. Chrissie said while wandering the gardens there one day, ‘why don’t we buy a farmhouse in Italy, start a family and rent out a room and you can teach locally’. Thus, the idea of Casa San Gabriel was born. David has to admit now ‘we probably got a bit carried away’.

‘During our travels we carried out as much market research as we could. Talking to fellow travellers, we found that those who had been to Italy loved it and while those who hadn’t been wanted to go. We were confident that people would come if we found the right property, in the right area so we set our hearts on Umbria, the green heart of Italy. We immediately wrote off Tuscany due to the price and Le Marche didn’t have the draw of Umbria and was much less underdeveloped at the time.

While traveling in Quito, Equador, we tracked down an English language bookshop and purchased a copy of the Lonely Planet’s Guide to Italy and started studying’. At this point, David had never set foot in Italy and Chrissie had only slept on the Venice railway station steps overnight when inter-railing as a teenager many years before and so to say they were naïve, was a great understatement. They scoured the internet for properties and made long distance calls, only to find the property in question was out of their price range or photographed to obscure the freeway passing along its boundary.

Upon arriving in the UK, Chrissie began visiting numerous properties in Umbria.  Most needed enormous amounts of work. This was not just a lick of paint or a bit of modernising renovation. But on her first visit to Casa San Gabriel, accompanied by a long-suffering aunt, ‘she instinctively knew this was the perfect property’, David says. ‘The views are stunning and it has a wonderful feel. As you gaze down the valley, there is beautiful Italian countryside as far as the eye can see, with Assisi glinting in the distance on Mt. Subasio.

We fell in love with the location as it was a perfect fit and still close to towns so there is a feeling of isolation without being isolated’. The position of the property meant guests could access many of Umbria’s famous hill towns within a half hour drive and then return to the tranquillity of the Umbrian countryside at the end of each day. They bought the property and rolled their sleeves up.

It might all sound wonderfully romantic so far, but to achieve their goals, the Langs had a long, hard road ahead of them. Their Italian was mostly Spanish, on account of their travels and they were thrown into the deep end of Italian bureaucracy, needing to set up an Italian company to buy the property and start a rental business. Chrissie’s accountancy skills proved invaluable as she set up objective based payments for the restoration to push forward on the works.  They worked long hours finishing off the property and then in the initial years with David teaching every afternoon and evening in Perugia while Chrissie was left alone with young children and while trying to manage a business and guests.  ‘Even adding photos to our website was agonisingly slow due to our dial up internet speed. It was a busy time’.

Casa San Gabriel was once part of a large agricultural estate.  When they purchased the property, it had not been lived in since the 1970’s. That meant no water, gas, sewerage or telephone connection. They were able to scrape enough money together to buy the ruin but needed to get a mortgage to complete the restoration. This was just after the fall from grace of Italian dairy company Parmalat and so money loaning restrictions were being tightened across Italy.  Fortunately, Chrissie wrote business plans at KPMG and so a kind Italian bank manager was convinced to provide a mortgage but he did so only on the basis all the money was paid back within 10 years. The properties deeds were held by the bank as a surety and the bank manager even visited Casa San Gabriel to decide which of the cottages he would re-sell first if they foreclosed. ‘This only added to their motivation’, David states.

‘We were incentivised by a grant for tourism businesses in Umbria but when this didn’t materialise, we were forced to turn to family for further finance and loans to make up the shortfall. We fought hard for every group of guests and with faltering Italian, all aspects of Italian life were challenging.  We worked hard on our Italian and it was the best investment we made, the importance of which can’t be underestimated’.

The collection of houses on the property all had walls and a roof, but that was about it. ‘We had to do all the internal restructuring, repaint all the walls and install utilities, doors, windows, floors, kitchens, bathrooms’, says David. ‘Sourcing locally wasn’t easy but through talking to friends and locals, we were able to find what we needed. We were determined to buy locally and support local businesses.

One of the biggest jobs was to bring town water to our property and all the others in our valley as everyone relied on the unpredictability of wells prior to our arrival. This involved setting up another Italian company with all our neighbours, a number who didn’t get on with each other and then working with the local water providers and contractors to undertake the works. We celebrated wildly when the works finished, a number of years later’.

‘Another big job has been the gardens. They were all scrub, but slowly over the years they have developed the outside areas and added a vegetable and herb gardens. ‘We even produce our delicious olive oil now. It is wonderful to watch a rose that you planted from rootstock grow to climb over the roof’. A swimming pool above the property was added and has an enviable aspect and guests are encouraged to take their dog Bessie and walk the various tracks around the valley.

David and Chrissie live in the farmhouse with their children Elisabetta and Lucia, while the three outbuildings have been converted into self-catering cottages. Elisabetta and Lucia were both born at nearby Citta di Castello and attend local schools, speaking Italian all day at school and then English at home with their parents. ‘Having children born in Italy helped us to become part of the local community. Many of the parents of children in the girl schools, attended ante-natal classes with us and so our children have grown up with theirs’, David says.

Each of the cottages at Casa San Gabriel has been restored in the local Umbrian fashion and have been given names that represent what they once were used for: La Stalla (the stable), La Cantina (the wine cellar) and Il Fienile (the hayloft) ‘Our criteria, along with the beautiful views and setting, was for separate cottages, so that all guests could have their own space and privacy, but still get together and chat if they wished. A large bread oven attached to the main house is used for the weekly pizza nights which is a hit with guests and neighbours alike. We were told it was used to make bread for all the properties in the valley once upon a time’.

The surrounding valley features a number of beautiful old stone farmhouses as well as olive groves, a vineyard and lots of rolling hills and woods. There is even a cellar door and winery now within walking distance. The position of the property means you can’t hear any roads, which creates a feeling of tranquillity. ‘Although I miss Australia, we feel very lucky to live here’, says David.

And their children get to meet and play with children from all over the world.

‘We are always here to help guests if they need advice or just to sit and chat over a glass of wine. The aim has always been to make sure people feel that they have a home while they are travelling’ says proudly David.