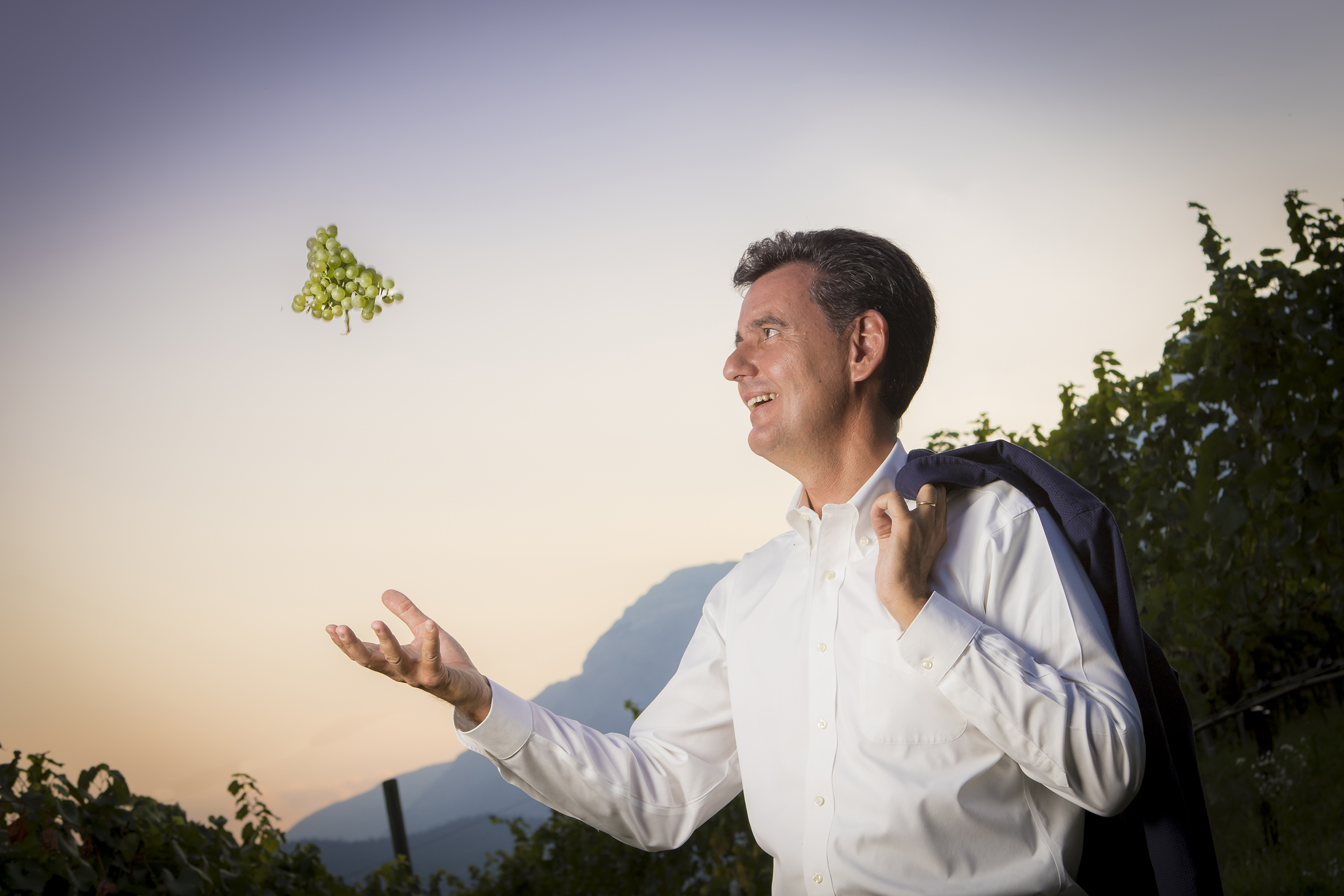 The history of ‘Italy’s best champagne’ is also the history of Cantina Ferrari in the Northern city of Trento. This company adventure started back in 1902 and has been paved with a number of remarkable stories of success. Two families, the Ferraris and the Lunellis, are entangled in an intriguing business relation that continues to produce outstanding results. Jesper Storgaard Jensen has been to Trento for Segmento to visit one of Italy’s most legendary cantinas. (Photos: Ferrari PR and Jesper Storgaard Jensen)

At the entrance of the Ferrari cantina, in Trento, North Italy, you’ll find a huge poster size image with a joyful couple that seems to be dancing. It’s all fun and laughter and unconcern … just as we all want life to be. Actually, you can almost sense the music in this contemporary image which shows a couple that is clearly part of the unworried so-called apritivo generation. Well, perhaps you should say sparkling aperitivo generation, because nowadays there should be no aperitivo without bollicine, bubbles.

The trend is clear. In recent years the Italians are falling more and more in love with the bollicine - sparkling wine, prosecco and champagne. The consumption has been steadily increasing in recent years. And so has the quality. And … speaking about quality, if you tend to want only the best, second to none, the king bubbles and all that … you should turn your eyes towards a particular brand that strange enough carries the same name as the king of cars: Ferrari.

The list of achievements and recognitions obtained by the Cantina Ferrari in Trento is starting to be quite long. In 2017, at the yearly “Champagne&Sparkling Wine World Championships”, the Trento DOC Ferrari Perlé from 1971 was chosen as the world’s best sparkling wine. Last year the same Trento DOC Ferrari Perlé, vintage 2011, received a surprising 98/100 points from the famous Wine Advocate Magazine.

From one country to another

Such a success, of course, doesn’t come from one day to another. In the case of Cantina Ferrari, in fact, it’s anchored not only in the soil of Trentino but also in the history books where two different families seem to be entangled in one another in a surprisingly proficuous manner.

In 1895 a young man called Giulio Ferrari has just completed compulsory school in Trentino. After that he starts to attend the prestigious Agricultural High school San Michele where he has his first experiences of how to deal with the soil of the Trentino vineyards. Here he studies and gets mud on his hands out in the fields … apparently a perfect combination when you want to learn about wine making.

These are just some of Giulio’s first steps in the wine world. However, it soon becomes clear that future important keywords in the Ferrari history will be “curiosity, new achievements and constant conquests”. Giulio wants to know more, so in 1897 he takes off to France, to a specialized wine-school in Montpellier which he attends for three years.

After that Giulio, at the age of only 21 years, goes on to … Germany, to the Rheinland where he, in Geisenheim, starts to attend the Botanisches Institut. Here, his studies are first and foremost concentrated on the fermentation of wines using the same methods that are used in the Champagne-district.

After Germany the young Giulio goes back to France, this time to the Epernay-district where some of France’s most prestigious champagnes are made. And again, working in the Pierlot cantina, he gets to know quite a number of secrets as regards soli, fermentation and production of champagne.

After a short period spent in Tunisia Giulio then returns to his hometown Calcerranica in Trentino. The year is 1902, Giulio Ferrari is only 23-years-old, and a great story is about to begin.

The famous and mysterious wine cellar

When you enter the Cantina Ferrari in the outskirts of Trento, quite rapidly you get a sense of history. The company is definitely modern and so are the production methods. But the history is somehow floating in the air. In the taste area various bottles of many different vintages are lined up, and you’ll receive explanations on production methods and peculiarities about the various wines. Crackers and different kinds of cheese - each with a different intensity of taste – are being served, to accompany the pleasant bubbles. It’s all balanced.

If you go one floor down, you’ll now find yourself in the famous and historic wine cellar – one of the most famous of its kind in the whole Italy. And also here, in this slightly dark and “mysterious” ambience, you’ll definitely sense not only history but also of the characteristic smell of wine must that comes from an impressing number of the approximately 24 million stored bottles.

Over the years, the wine cellar has become such an attraction that Ferrari now arranges guided tours through its corridors.

In fact, as you meander through the cellar’s dark corridors you are totally surrounded by bottles of many different vintages. It’s a magic atmosphere, and the magic increases when you once in a while hear a strange and mechanic sound. This happens when some the most prestigious wines, that can be stored for several years, are mechanically turned around to avoid that the yeast sticks to the inside of the bottle.

The Ferrari-chapter that regards storage is remarkable: during the Second World War Giulio Ferrari was quite worried about his production and his cantina in the middle of Trento. So in order to protect his vintages from 1937-1939, in 1943 he decides to wall up the entrance of his wine cellar. No one could get access for a period of two years, and when he, in 1945, decides to reopen his cellar, he discovers that the quality of the wine, after two years of storage, has improved noticeably. Actually, the vintages from 1937-39 become his first production of “riserva”!

Into a bright future

When Giulio starts his company in 1902 many people were sceptic. “It’s impossible to make champagne outside the Champagne area”. This was how the classical sermon sounded like. But Giulio surprised them. He had an intuition: the Cabernet and Chardonnay-vines brought back to Italy from France would perfectly be able to adapt to Italian soil. And he was right.

Very slowly sceptics turned into enthusiasts! The production was modest (only some 2,000 bottles a year) but the quality was surprisingly good. But, of course, not good … enough! Over the years, Giulio keeps on working on quality and in 1937 the first big and important recognition arrives in Paris, when this Italian champagne receives the highest of all appreciations: Diplome de Grand Prix in the international champagne competition.

And this will be, as a matter of fact, only the first of a long line of prizes and recognitions to come over the years.

In the period between the two world wars Giulio Ferrari gets in contact with another wine entrepreneur, Bruno Lunelli. He has stated a huge activity in wine commerce. Their business relationship is interrupted by the Second World War, but right after the war they start to do business again. Time passes, however, and Giulio Ferrari doesn’t get any younger. His business increases by the year, and since he has no heirs, he ends up choosing Bruno Lunelli to whom he turns over his company in 1952.

Time has shown that this was a wise choice. Although Bruno Lunelli did not have a specific knowhow on wine making, he did have an extremely developed sense of business. He decides to keep the high quality of the product, but at the same time increase production – from only a couple of thousands on a yearly basis up to 20,000. And when Giulio passes away in 1965, at the age of 85 years, production has been boosted to an impressive 60,000 bottles a year.

Later on Bruno passes on the company to his three children Franco, Gino e Mauro. Meanwhile the popularity of the Ferrari is rapidly growing. Andy Warhol asks for Ferrari in a disco in Milan, former president Ciampi serves Ferrari to the British Queen Elizabeth II during her state visit to Italy, and when Italy becomes world champion in football in 1982 the bubbles that are splashed into the face and mouth of the players are, of course, Ferrari.

In 2018 the turnover of the company increased to 100 mio. euro, and just recently Italy’s perhaps most prestigious food- and wine guide il Gambero Rosso elected Cantina Ferrari to be the “Best Cantina in Italy in 2019”.

Quite a tempting hilltop

So, it quite clear that everything is done wholeheartedly in Cantina Ferrari. A proof of this is also the fact that the Lunelli-family has strived to couple the best Cantina Ferrari has to offer together with a superior food experience. For that reason, in 2007  the Locanda Margon-restaurant was opened. It’s sited on a hilltop in the outskirts of Trento where you have a beautiful view to the valley below and to parts of the city.

The turning point of the restaurant occurred in 2010, when the young talented chef, Alfio Ghezzi, was hired. He used to be pupil of the legendary chef Gualtiero Marchesi, who was perhaps the person who “invented” modern Italian cuisine. The skills and ambitions of Ghezzi immediately paid off, because only one year later, in 2011, Alfio conquers the first Michelin-star. Then, in 2016, the second star arrives in the kitchen.

You can choose between two different mixed menus: Suggestione Bollicine where the food is carefully selected to accompany the most prestigious Ferrari wines, and Suggestione Terroir which is a culinary journey in what the soil of Trentino has to offer.

Yes, this hilltop might probably be one of the most tempting in the whole Trentino region.