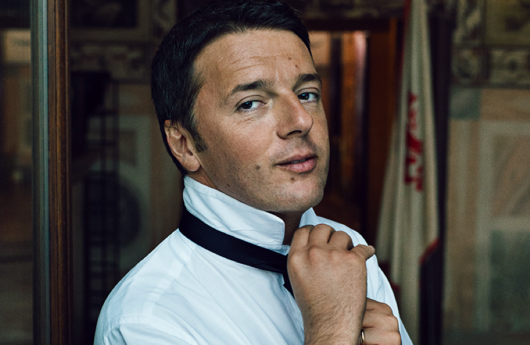 The young man who has Italy's destiny in his hands

He is the youngest ever-Italian prime minister and has been set out to transform his outdated and ailing country into a leading European nation. His name, of course, is Matteo Renzi and his sheer optimism and confidence are reminiscent of the early days of Silvio Berlusconi’s rise to power.

Renzi comes from a middle-class family, is a devout Catholic married to a like-minded woman who has bore him three children. At nineteen, he was a contestant on Italy’s version of “Wheel of Fortune”, won three weeks in a row and took home some thirty thousand euros in prize money. At twenty-seven, he became the local leader of the Margherita center-left coalition that in 2007 merged with the newly created Partito Democratico, born from the dust of the Italian Communist Party. At twenty-nine, he was elected president of Florence’s provincial council and five years later, he successfully ran for the position of mayor.

His supporters call him “Italy’s only hope”, skeptics see him as an “illusionist”and his political enemies have tagged him as a “windbag.” Before becoming prime minister, he made a name for himself as il rottamatore, the demolition man. He used to say that much of Italy’s public administration and political system needed to be scrapped. He meant the deadly bureaucracy, the outrageously slow pace of the justice system, and the culture of cronyism, the political perks and payoffs, tax evasion, the casual everyday criminality. Not to mention the various mafias, from the Cosa Nostra to the Camorra and the ’Ndrangheta, that still hold much of the economy of the South (and now also some of the North) in thrall.

In January last year a month after winning the leadership of the Democratic Party and a month before being appointed prime minister by the then president of the Italian Republic, Giorgio Napolitano – he struck a deal with Silvio Berlusconi that put his party’s old guard’s nose out of joint. The deal was essential to get his reforms approved by the Italian parliament and was negotiated at the Democratic Party head- quarters, an ancient building that used to be occupied by a boarding school called Collegio Nazareno. For that reason it became known as the Nazarene Pact, and even if its terms were never officially disclosed, they soon leaked to the Italian media.

Berlusconi pledged his Forza Italia party’s support for two of Renzi’s key reforms. One was a new electoral system that would guarantee a majority and the other required amending Italy’s postwar constitution, a document based on an extreme idea of democracy with its overbear- ing checks and balances.

Renzi’s is the sixty-third government of the sixty-nine year old Italian Republic. His idea is to reshape the Senate; greatly reducing its size and transforming it into an assembly that would deal mainly with regional affairs, play no part in the creation of the country’s governments, and leave the legislative power in the sole hands of the chamber of deputies.

In return, Berlusconi would have a say in the selection of the country’s next president and regain some political credit after his involvement in a long series of judicial proceedings and sex scandals.

While the socialist left of the Democratic Party cried betrayal and Berlusconi cheerfully waited for absolution, Renzi quietly pushed the presidential nomination of a Constitutional Court justice named Sergio Mattarella. He, at seventy-four, had spent his life battling Italy’s criminal world (Mattarella’s older brother, a reform governor of Sicily, was gunned down by the Sicilian Mob in 1980, at the age of forty-five). The Democrats’ recalcitrant leftists fell in line behind Mattarella, and then was Berlusconi who cried betrayal. Mattarella became president in January this year and the Nazarene Pact became outdated.

Then came Enrico Letta, a gentleman politician who fifteen years earlier had been the youngest minister in the history of the Italian Republic. He was a highly respected member of the Democratic Party and was to lead a government with shaky support from Berlusconi’s  party. He lasted ten months as prime minister until rumours spread that Renzi, who had won the Democrats’ leadership, was getting ready to take over. Renzi reassured Letta with a condescending tweet: “Stay calm! Nobody wants your job.” The next day, Letta drove to the Quirinale to offer his resignation to Napolitano and by evening, Renzi was the new prime minister.

Renzi wanted fresh and appealing faces in his cabinet to signal the end of the old Italian style of politics and he opted for youth and women (eight of the sixteen ministers he appointed were in fact young women.) It worked. A few months later, riding the wave of Renzi’s popu- larity, the Democratic Party won forty-one per cent of the vote in Italy’s European parliamentary election. It was a spectacular victory for Renzi better than any Italian party had done in any election since 1946, and certainly enough of a mandate to negotiate his reforms.

It has been said that Renzi’s “Rome” is the elevator between his office on the first floor of Palazzo Chigi, the Renaissance building that hosts the government’s headquarters, and his official apartment on the third. His wife remains in Florence where their three children go to a state school and where she teaches Latin and Italian in a high school. Most weekends, Renzi flies home to see them. On the few occasions when the family spends a weekend in Rome, Renzi joins them at a seventeenth-century villa in a tranquil, outlying Roman park, which for years has served as one of the Prime Minister’s official retreats.

Twenty months have elapsed since his appointment as prime minister and he has been ableamidst a growing hostility from the left of his own party and all opposing parties like the ramshackle Forza Italia, the populist Movimento 5 Stelle and the right-wing Northern League to reform the electoral system, labour law, education and the bank industry. After five years of continuous recession, Italy’s economy is finally showing signs of recovery and even unemployment is slowly but steadily decreasing. Possibly Italy has started seeing the light at the end of the tunnel. Renzi is sure about it that he has recently announced the abolishment of the property tax on primary home (Imu) in 2016, a further reduction of corporate taxes in the same year and a cut of income taxes from 2017.