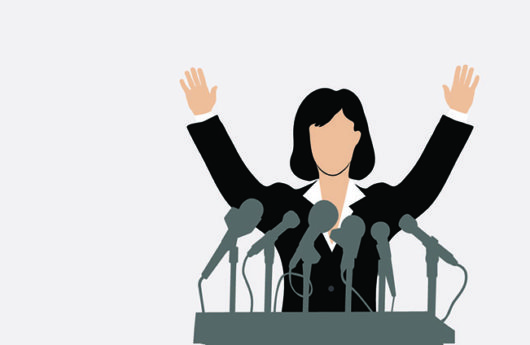 The rise of young and beautiful women in Italian politics

The appreciation of female beauty has been at the heart of Italian art and culture for centuries, and continues to be relevant in contemporary Italy. The feminist idea that glamour works against women, famously argued by the American author Naomi Wolf in her book “The Beauty Myth”, has never taken root in Italy.

As a matter of fact, physical attractiveness gives Italian women a better chance of finding a job and developing a successful career. It also appears to be a determining factor to make it in politics.

Silvio Berlusconi was famous for appointing models and actresses to cabinet and more recently the current Italian Prime Minister Matteo Renzi has been accused of appointing female ministers based purely on their looks. Many of them were placed in heavyweight roles. In a country that has never had a female prime minister or head of state, the choice was strikingly symbolic.

A crucial ministerial post was given to the 35-year-old Maria Elena Boschi who regularly graces the cover of magazines such as Vanity Fair while Marianna Madia, 37, Minister for Public Administration, has drawn comparisons to beautiful female figures painted by the Italian-English artist and poet, Gabriel Dante Rossetti.

Maria Elena Boschi drew much media coverage back in 2014 when Matteo Renzi appointed her, at age 33, minister for constitutional reforms. Many people thought that her performance as a minister wouldn’t match her glamour but, since then, Boschi has shown that youth and beauty is not incompatible with political stamina.

She overviewed the legislative process for a historical reform which is named after her. The “Boschi Act”, if approved by a popular referendum in November this year, will put an end to a system where the two houses of Parliament have equal powers, which means lengthy procedures and, often, government inertness.

Like many of Renzi’s acolytes, Boschi, a lawyer born in Tuscany, had to overcome many obstacles in her first parliamentary test. A regular talk-show guest, she has avoided political gaffes and has even taken the liberty of differing from her mentor. On civic rights, for example, she is in favour of gay marriage, whereas Renzi is more ambiguous. No wonder some already see her bound for even higher positions. “She could even, one day, be the next prime minister,”says Renzi’s biographer, David Allegranti.

Recently though, her image has been tarnished by a controversy linked to the collapse of Banca Etruria, a regional bank in central Italy where Boschi’s father, Pierluigi, served as vice-chairman.

She survived a no-confidence vote in the lower chamber of parliament that was demanded by the opposition. She staunchly defended herself saying she is “proud to be part of a government that expresses a very simple concept – those who do wrong, must pay, whoever they are, without any differences or favouritism, If my father did wrong, he must pay.”

She has depicted her family as victims of the bank’s collapse, noting that the shares they held were now worthless. “I possessed 1,557 [shares] that were worth €1,500” she said. “Now they are worth zero, they are scraps of paper.”

Given the tendency by Italian media to objectify women in power, some say there may be an element of sexism in blaming her for the alleged activities of her father. Since the day Renzi’s government was sworn in, and a fake image of Boschi with a G-string showing above her trousers circulated on social media, her looks and lifestyle have been the subject of considerable media speculation. Voluptuous paparazzi photographs of her in a bikini while on holiday have filled the pages of celebrity magazines.

Two new young female stars of Italian politics have emerged in more recent times. One is Virginia Raggi who, last June, was catapulted to fame after becoming the first female mayor Rome in Rome’s history. The 38-year-old lawyer belongs to the anti-establishment party founded by the former TV comedian Beppe Grillo and known as the Five Star Movement, and won a landslide victory.

She came into politics when she was elected to the Rome City Council in 2013 and sat in opposition to Ignazio Marino, a Democratic Party mayor who was forced to resign last year over an expenses scandal.

Her looks have received a lot of attention in the Italian press, but she insists that she wants to be judged on her political accomplishments. She is estranged from her husband and has a seven-year-old son, and apparently it was his birth that egged her into politics, as she wanted to shake up the city to give him a liveable environment.

Another ascent in the Italian political scenario by a young and good-looking woman is that of the 32-year-old Chiara Appendino who was surprisingly elected to the position of mayor of Turin, one of the major industrial towns in Northern Italy. She also belongs to the Five Star Movement and is the mother of a baby girl born last January.

A graduate of Bocconi University and an executive in the company owned by her husband Marco, Chiara Appendino led a campaign without the yelling and the “go screw yourself” typical of Grillo’s movement.

The last few days of the campaign saw an end-of-an-era climate, evidenced by an unexpected media aggressiveness by the outgoing mayor, Piero Fassino, a long-standing leftist politician who was expected to be reconfirmed in power. Two visions of the city clashed during the electoral campaign, one claiming full success in transforming the city from an industrial, car-producing city to a city of services and culture — and the other challenging that narrative. “The city centre,” Appendino said, “has been subject to noticeable re-qualifying interventions, a front-view window. However, the suburbs, where the economic indicators appear as being dramatic, have been neglected. We’d like to create a polycentric Turin, where all the neighbourhoods, even the most external ones, can be the subject of economic and social development.”

Such statements indicate that being young and beautiful does not necessarily equates with dumbness or incompetence. It is actually often the opposite. According to many sociological studies, the common belief that what a woman may lack in looks, she can make up in intelligence or personality is more a myth than a fact.

Research by the evolutionary psychologist Satoshi Kanazawa published in the professional journal “Intelligence”, that “physical attractiveness is significantly positively associated with general intelligence.” In what many would regard as a controversial perspective, Kanazawa says that “our contention that beautiful people are more intelligent is purely scientific” and “it is not a prescription for how to value or judge others.”

Charles Feng of Stanford University claims, “In society, attractive people tend to be more intelligent, better adjusted, and more popular.” Whatever the reason, the notion that attractiveness correlates with success rings true. Yet beauty is not always advantageous, for beautiful people, particularly attractive women, tend to be perceived as more materialistic, snobbish, and vain.

For better or worse, the bottom line is that research shows beauty matters; it pervades society and affects how we choose loved ones. Thus, striving to appear attractive may not be such a vain endeavour after all. Even in politics.