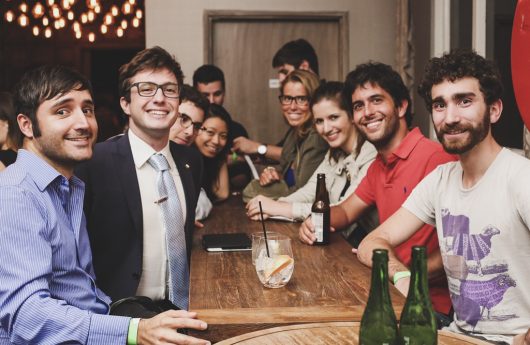 Carlo Guaia, a third year Bachelor of Arts student at the University of Western Australia, is a staunch believer in the “fair go” spirit of Australia. For a growing number of people such spirit is long dead and gone but not for him who has put it into practice through a community organization he founded late last year, with the aim of bringing Italian and Australian scholars, professionals and students together.

The initiative sprang from Carlo’s experience as Vice President of the University of Western Australia (UWA) Italian Club in 2014 and 2015. He realised that the Italian community lacked a network that could link researchers with the private sector, even though there were a lot of Italians with great ideas and creative projects. He came into contact with a few other members of the Italian community who shared his aspirations and they started meeting up and helping each other out, a process that soon grew into ISPC-WA.

November saw the official launch of the ISPC-WA, an event that Carlo describes as most encouraging. “We gained a lot of exposure across the WA Italian community which is important because research and innovation needs to be owned by the entire community. The people who were present at the launch were really inspired by the energy of our young Italian scholars & professionals”.

ISPC-WA is now well established and running regular events. The most recent one was a Christmas Networking Aperitif which was attended by 75 people who filled the “Davvero – Caffe’ e Cucina” premises. “Most initiatives – says Carlo – are hitting those numbers or more and we never thought we would achieve this so quickly!”

ISPC-WA has close to 400 members, many of whom are young Italians who are distinguishing themselves in their respective field of enterprise. One of them is Raffaele Ragni, a 28-year old geotechnical engineer on his third year of a PhD at the UWA Centre for Offshore Foundation Systems. His research is focused on the installation of foundations for mobile drilling platforms, employed in the oil and gas industry across the globe.

Another is Federica Marchesini, a young woman who used to be a teacher of English and Spanish in Italy and started her new life in Australia five years ago working in the hospitality industry. Federica is today a successful professional who runs a digital marketing company called MJ Social (www.mjsocial.com.au). Two amongst many examples of highly talented people who have joined ISPC-WA.