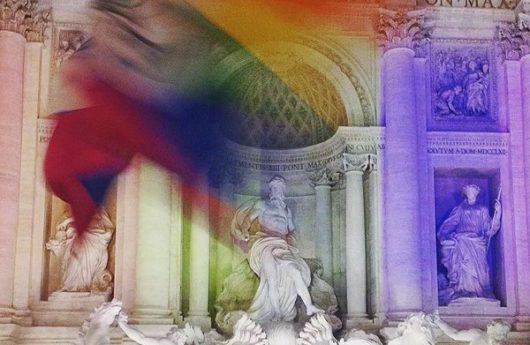 On May 11th 2016, the Italian Parliament approved a law giving the green light to civil unions in Italy. On that fragrant spring evening, to celebrate this historic accomplishment, people gathered in front of the Trevi Fountain in Rome.

Strolling amongst the crowd were Bruno and Orlando, a couple like any other, completely dazzled by the sight of the fountain; but it wasn’t the baroque masterpiece that captivated them as much the colorful rainbow projected onto it, marking the victory of civil rights after decades of religious and political intransigence.

Twenty-seven years after Denmark, the first country to pass a law on same-sex unions, Italy has finally closed the circle of Western countries that recognize civil unions between same sex couples, regulating rights and duties.

This news is monumental since the history of battles for civil rights in Italy has witnessed many defeats and very few victories. The laws on universal suffrage, divorce and abortion were opposed, and at times even demonized by the most radical of Catholics and political groups, determined to maintain the status quo.

Before the law on civil unions, same-sex or unmarried heterosexual couples had no rights, as they were not legally recognised. Prior to the introduction of the law, if a member of a couple fell gravely ill, the other would not be entitled to assist and support them in hospital. Similarly, in case one would pass away, the other would not be entitled to inherit their partner’s property, make burial or funeral arrangements, etc..

The law on civil unions governs de facto couples, both heterosexual and gay, with legal frameworks. Civil unions are entered into in front of a registrar and in the presence of two witnesses. Entering into a civil union regulates all financial and economic concerns of a couple, such as buying a house, financial contributions in favor of the lower income earner in case of separation, and the maintenance and education of children concerned. Similarly, widow allowance, community property, mandatory cohabitation requirements, but not necessarily fidelity as in marriage. Partners must contribute to the moral and material workings of the relationship. Many marital rights also are extended to gay couples: parental leave, collective labor rights, dependency, permits for assistance to the spouse, childcare support and the ability to take a common surname.

Nevertheless, gay couples in Italy remain excluded from adoption, surrogacy and the adoption of stepchildren.

However, times are changing, society is changing and men and women of good sense are the new basis of Italian democracy, further and further from the irrelevant vintage mystification of old politics.

Bruno and Orlando now smile and stare intently into each others eyes until Orlando, his voice broken with emotion, says: “Bruno will you marry me?” “Of course, my love,” answers Orlando, “I have loved you for years. We have lived in the same house together for years, the very house we paid for and built together. For years we have fought against the homophobic and the narrow-minded. You are my family!” As expected, tears tinted in the colours of the rainbow begin to flow.

Note: Bruno and Orlando really exist and have always lived in Pineto, Abruzzo, in a house full of flowers and joy. Some say they will soon marry after 51 years of living together.

AC - An Italian city of ill-repute rehabilitated by three films