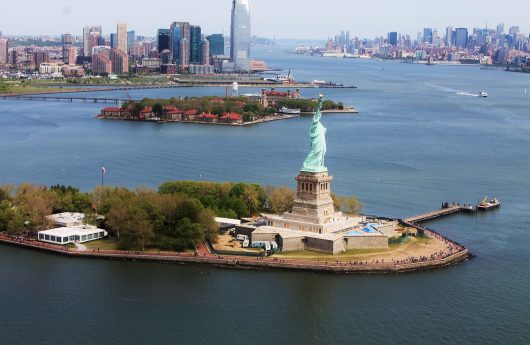 On a recent trip to the US I was humbled to explore Ellis Island’s National Museum of Immigration. The harsh conditions of the New York winter melted away as I stepped inside the warm and welcoming lobby. After catching my breath, I stopped to admire the world I had stepped into. Millions of hopeful immigrants had to withstand gruelling transit conditions with no guarantee of security in the US.

Ellis Island, one of America’s largest migration processing centres, exists today as a testament to the 12 million men, women and children who dared to dream for a better life in America. Disused since 1954, the island’s facilities underwent significant redevelopment and restoration to enable the development of the National Museum of Immigration in 1990. One of the first things you see upon entering the museum is a collection of old tattered suitcases. They stand as symbols of courage and determination that have lasted the test of time. Visitors are guided through the museum via a series of rooms, each more profound than the last. Overall, the exhibits are simple; perhaps with the intention of conveying poignant messages rather than overwhelming visitors with smoke and mirrors.

My nonne have never shied away from telling me stories about their experiences migrating to Australia. Their stories, although different from the American experiences, have similar undertones of uncertainty, hope and fear. As I made my way through the exhibition rooms I was humbled by the stories and faces that met me at every turn. It felt as if I were walking through the pages of my own family history. Black and white photos have an eerie way of seeming familiar and I found myself trying to find familiar faces amongst the exhibits. Even though immigrants from all nations are represented equally in the museum, I couldn’t help but find myself drawn to the Italian experiences.

Migrating to America offered freedom and peace to many, however, arrival on Ellis Island did not guarantee you confirmed clearance; a lesson learned by many ‘aliens’. Once docked, passengers were subjected to medical inspections which examined not only one’s physical health, but also mental state. Any arrival who required medical intervention was either treated at the Ellis Island hospital, or was returned to their homeland without appeal. Similarly, arrivals were interrogated to ascertain their eligibility to land. It was often harsh and heart breaking.

Given the range of nationalities that docked, communication between the processing staff and immigrants posed certain challenges. These exchanges took place in the Registry Room, also known as the ‘Tower of Babel’. I was particularly taken by the experience of one interpreter, Edward Ferro: “It would happen sometimes that these interpreters – some of them – were really soft-hearted people and hated to see people being deported, and they would, at time, help the aliens by interpreting in such a manner as to benefit the alien and not the government,” a plaque reads.

A common Italian migration experience in Australia’s history is that men were often the first to migrate, followed later by women and children. The separation was often as a means of establishing work prospects, financial stability and housing; this was the case for the Italo-American migration history. Policies were in place to protect unescorted women and children who arrived on Ellis Island. Women and children were detained until a member of their family with relevant documents arrived to release them. Similarly, unmarried women had to be collected by an immediate family member. A large number of marriages were performed on the island as a way of meeting the release requirements.

Despite the tough arrival conditions, immigrants processed at Ellis Island were granted greater liberties than many others seeking refuge and security on today’s waters. It is heart-warming to know that facilities like the National Immigration Museum exist to preserve the stories and celebrate the positive impact that immigration can have. We should all take stock of the process of immigration itself and appreciate the courage required to seek a better life, liberty and justice.