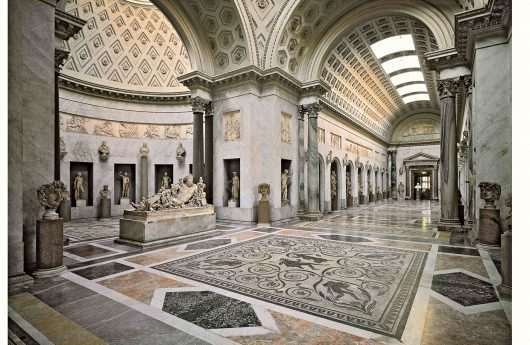 With a few exceptions, men continue to monopolize all positions of power. Not just in politics but in all major industries and institutions, including those preserving, managing and displaying art collections. It is a fact that most of the world’s great museums and galleries remain firmly under male control.

The directors of the British Museum and the National Gallery in London, the Prado in Madrid, the Louvre in Paris and the Metropolitan Museum of Art in New York are men. In Australia, where the so-called “affirmative action” contributed significantly to women’s progress in the workplace, the three largest national galleries—in Canberra, Melbourne and Sydney—are still headed by men.

Yet paradoxically enough, the most male-dominated state in Europe has appointed a woman to the top position of its world-famous art collection. On 1 January 2017, the fifty-four year-old Italian art historian Barbara Jatta became the new director of the Vatican Museums, succeeding the seventy-seven year-old Antonio Paolucci. A wife and mother of three children, she has served as Vice-director of the museums since June 2015 and has a track record of dozens of scientific publications and internships in different countries around the world including Portugal, England and the United States.

This is not as surprising as it seems. The Vatican may be one of Europe’s last surviving medieval city states, run by cardinals and policed by Swiss guards with spears but, as far as art is concerned, it has a history of unexpected modernity. It is the only religious institution collecting works by atheist artists. The modern gallery of the Vatican Museums proudly displays a grotesque painting of a suffering pope by the defiantly godless Irish-born painter Francis Bacon. That is probably the most provocative presence in a sensitive and imaginative collection, of modern religious art that includes Van Gogh’s “Pietà” and paintings by Dalí and Picasso.

The Vatican Museums consist of a network of collections that fill a large part of the Vatican itself. Queues of visitors often stretch along the papal palace complex. The cornucopia of art includes the Pinacoteca—where such paintings of Leonardo da Vinci’s “St Jerome” and Caravaggio’s “The Entombment of Christ” hang—and numerous archaeological collections that have everything from giant bowls from Nero’s palace to an extraordinary Egyptian art installation from Emperor Hadrian’s villa.

At the heart of it all is the Belvedere courtyard, one of the oldest extant art galleries on earth. Here stand some of the most renowned masterpieces of classical sculpture including the iconic statue of Apollo Belvedere. In the 18th and 19th centuries, this was the most hallowed destination of the Grand Tour. Young aristocrats from all over Europe came to see this statue which was regarded as the most beautiful statue ever made. Looking at it, it is easy to understand where Michelangelo took inspiration for his David. After paying ancient art its due reverence, visitors can make their way towards the climax of the Vatican Museums–the Rooms of Raphael and Michelangelo’s Sistine chapel.

In recent years, the big challenge for this museum has been to cope with its colossal crowds in spaces that were originally designed for cardinals and popes to spend time in. Measures have had to be taken to preserve the Sistine frescoes at risk from the sheer number of people passing through. Jatta will no doubt have to wrestle with these problems as her predecessor has. Her appointment coincided with the reopening of the Vatican Museums’ New Wing (Braccio Nuovo). Commissioned by Pope Pius VII, the 19th-century gallery was designed by the sculptor Antonio Canova to house the repatriated papal collections of classical sculpture, plundered by Napoleon during his Italian campaign. The 68m-long marble corridor and its 150 statues have been under restoration since 2009 in a project funded by the Vatican City State and the Patrons of the Arts in the Vatican Museums.