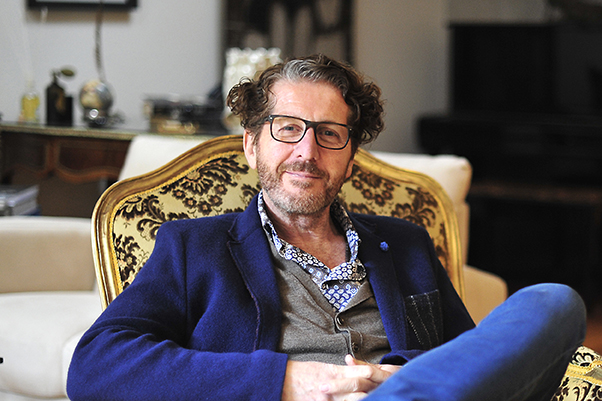 Beyond patterns and habits lurks a land to depict

The first time he landed in Rome, he burst into tears of emotion. He was a recently graduated 23-year old. He’d bought his ticket to Italy with his meagre savings and he didn’t even know why he was going, but he went and fell in love. A love that is renewed each time he goes back, as if he had lived there in a previous life and is simply going home.

Born and educated in Australia, Brian Reberger can’t recall any specific reasons why he should have been so fascinated by Italy. It was as though Italy was calling him, and he answered. After this first trip, Italy became a dream to chase, a land to depict.

The medium was chalk pastels and oil on canvas.

‘The moment in which you finish your artwork is the greatest moment. You step back, look at it and you feel grateful to have the gift to create something.’ Brian is modest and unpretentious. Pride is more what he feels. Sometimes he finds himself surprised by the outcome of his effort. ‘How could I have possibly done it? Can I do it again?’ he asks himself. ‘Probably not in the same way.’

All of Reberger’s pieces catch corners, moments, views of a country that he is, after more than 20 years, still eager to discover in its more intimate aspects. That’s the beauty of discovery; your receptors are wide open; your feelings and judgmental capabilities are not constrained within any boundaries created by habits and patterns. You are like a child, you see more, hear better, smell more accurately. And you produce your own, fresh, unprecedented perception of the reality you’re watching. If you are an artist, this is then when your creation becomes art.

Brian always starts from one of his photos. What is surprising is that he doesn’t follow a specific pattern. He doesn’t go out with the camera to catch the scene to depict, rather, when he needs inspiration, he starts looking into his entire photo collection. He might find inspiration from an image shot years before, something that at the time didn’t mean anything special, but now becomes relevant to express himself. A medium to communicate his vision to the world.

The presence of human figures in all Brian’s artworks is never relevant. In some creations they might be more visible, in others completely absent. The scene is never represented in full details. Brian’s aim is to give a starting point for a reflection. He doesn’t seek to give the viewer any answers or strict interpretations, but he provides all the hints one needs to find theirs. There is a kind of open conversation between the artist and the owner, or the observer of the artwork. One can observe a different detail at every single viewing of Brian’s masterpieces, depending on mood, experience, or feeling.

The artist is currently working in black and white. Brian, whose first oeuvres were colourful and bright oils and pastels, is minimalizing his technique to increase the strength of the message. Recently he has added silver and gold leaf, reminiscent of the walls of Italian churches, from the Renaissance Italian painters like Bernini and Cellini. It’s a touch of Italy itself.

The technique is not the only aspect that has changed in Brian’s work over the course of time. A milestone of change was, of course, the meeting of his partner 22 years ago. Alfredo is Italian and the desire to live in Italy shared by the couple since the beginning, gave Brian an even more effective push to get closer and go deeper into the Italian reality.

Reberger’s creations capture the essence of the scene regardless of whether it is a panorama, a corner of a country village, a piazza or a monument. As an Italian, you immediately recognise the outline, and being able place the subject into its environment, you feel at once at home and wistful.

‘Stray from the beaten path. Leave behind patterns and habits. Don’t be afraid to make mistakes, they are accidents that help you to improve. Don’t be afraid to get lost, because this is when you find more’.   This is his credo. A philosophy that allows him to achieve the satisfaction of creation, the pleasure to produce masterpieces that don’t shade but complement the environment where they will be placed.

Brian now divides his time between Australia and Umbria, where the artist gathers inspiration and creates his masterpieces to share with the Australian community.

So, get ready for the next exhibition with new and unreleased works: from the 29th of November to the 2nd of December at Steps Gallery in Carlton. We will meet Brian there.