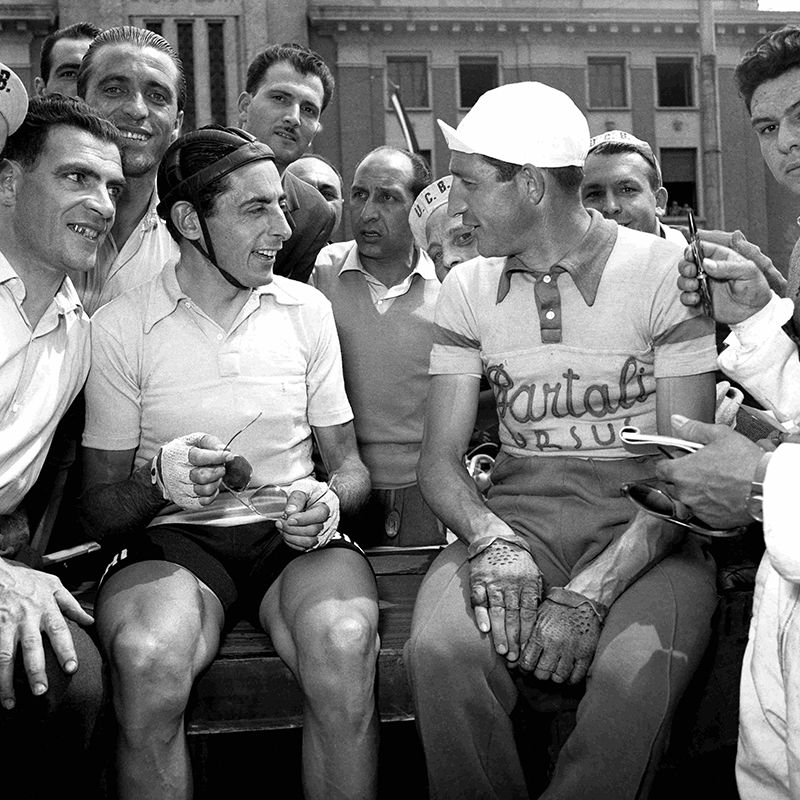 Bartali vs Coppi: A sport rivalry that mesmerised a whole nation

It is a bright early July day. On a dusty mountain track fringed by fir trees and leading to a pass in the French Alps 2,600 metres above sea level, two men are struggling, pushing, panting. Their sweat has dried on their faces etching masks of effort and pain.

These men are road race cyclists and the scene is the Tour de France of 1952. The two are Italy’s greatest sporting rivals, having battled for more than a decade for world cycling supremacy. Winning this Tour would confirm one of them as the greatest cyclist of the era.

Their names are Gino Bartali and Fausto Coppi.

Throughout Italy and France, and every other country that has taken cycling to its heart, these men are champions, not only of their sport, but of sport itself.

As is true for every sporting legend, their success did not come easily. Their careers had been suspended over the long war years when road cycling races, particularly international ones, had been cancelled. Both suffered greatly in the war and risked their lives in the front-line of destruction. Mourning the deaths of younger brothers who had died in the cycling saddle they came from harsh rural lives; climbing their way into cycling’s pantheon, through determination as sheer as the slope they were now slowly conquering, with each aching thrust of muscled leg and whisper of rubber tyred wheel. Both men nursed intimate and battered beliefs that urged them onward past the pain, dust, risk of death, quest for celebrity and fame, and even beyond their own dogged rivalry.

These men, at one with their painted steel machines, were racing beyond the past and beyond any thought of the future. Only the present could define what they truly were.

The rest of the world, their ears clung to a myriad of radios, or rising early to glue their eyes onto the freshly painted pages of the sporting chronicles, could only imagine, wonder at and admire this struggle of titans.

On this same bright July day, a photograph was taken: it showed Bartali following and slightly to the side of Coppi’s front wheel, handing over a water bottle to his arch-rival. Or was it Coppi passing the bottle backwards to Bartali? Neither of them was looking at the other, their faces shining with sweat and bulging at the veins, mouths open to gulp the thin mountain air. Wonderment and speculation would follow this photograph well beyond the race and to the present day.

The brusque plain-speaking Bartali, nicknamed ‘Ginettaccio’ or ‘Gino the terrible’, came from a small rural village near Tuscany. He was slim, but endowed with sinewy strength and a great capacity to endure, a fundamental quality for a road race cyclist. Five years older than Coppi, Bartali’s career had begun earlier and he had suffered more than his rival during the grim interwar years under Italy’s harsh Fascist regime.

After winning the Giro d’Italia in 1936 and 1937, Bartali had set his sights on the 1937 Tour de France. A victory here would have made him the first ever rider to win both races in the same year. ‘Ginettaccios’ chance however at winning the more internationally prestigious Tour de France was stopped by interference from Italy’s peak sporting body which withdrew him after a minor fall during the race. Italy’s dictator, Benito Mussolini, could not contemplate the risk of ‘Ginettaccio’ losing the Tour. Mussolini wanted to ensure Bartali would be in better shape to win the Tour de France in the following year. ‘Ginettaccio’ had become the regime’s poster-athlete, living proof of the superiority of the Italian master race. Nothing would be allowed to compromise his win in the Tour. In 1938, after having been prohibited from racing the Giro d’Italia to avoid any risk of injury, Bartali participated in the Tour de France and won to the satisfaction and glory of Fascist Italy.

During the war, Bartali secretly joined the Resistance and saved hundreds, perhaps thousands, of Jewish Italians and refugees from the extermination camps by carrying forged identity papers concealed in the hollow tubes of his bicycle, riding through military road blocks with little more than his celebrity status to shield him.

Coppi was born into a family of landless agricultural workers in the northern Italian region of Piedmont, and began a life of hard labour in the fields. Many have attributed Coppi’s thin and fragile frame to the malnutrition he endured in his childhood. However, he was endowed with an extraordinary heart and lung capacity, qualities that he combined with the determination and the capacity to suffer that all great road race cyclists must have. His gaunt frame would soon earn him the epithet of ‘l’Airone’ or ‘the Egret’. After being selected by none other than the ‘Ginettaccio’ himself, Coppi’s first major win would be the 1940 Giro d’Italia, on the eve of Italy’s entry into the Second World War. He is still the youngest athlete to win the Giro at the age of twenty. His victory could arguably be attributed to Bartali’s fall in the same race after a stray dog cut him off. Coppi would soon be sent to serve as a soldier in Tunisia where he was captured and spent two years as a prisoner of war.

Then came 1952: Coppi won the Giro d’Italia. ‘Ginettaccio’ came in fifth at 10 minutes and 53 seconds. The 1952 Tour de France would be ‘the Egret’s’ opportunity to repeat his 1949 double win. The Tour would also become Bartali’s chance to deny Coppi taking an unprecedented double and to again seize the crown of the world’s greatest road cyclist. By now ‘Ginettaccio’ and ‘the Egret’ had become two of Italy’s greatest sporting rivals.

Road cycle racing was the most popular competitive sport of Italy and much of Europe. From its inception in its modern form, the bicycle had freed the working classes from their geographic bondage, enabling them to range far and wide in a world where traditional means of individual transport were either too slow or too expensive. The bicycle became the workers’ window on the world long before the rise of the motor car as a vehicle of mass transit. The thousands of road cycle race spectators that thronged the dusty roads of this era, and the millions more that followed them on radio and in hastily published papers understood intimately the joys and challenges of their steel steeds. They knew just how hard it was to push their bodies up steep and badly made roads on aching legs.

Not surprisingly, Bartali and Coppi would become rival icons of Italy’s post-war Renaissance, the country’s recovery from the shattering of the illusions peddled by Fascism and the depredations of war. The religiously observant Catholic Bartali symbolised the traditional peasant Italy, uncomplaining, hardworking and decent, steeped in age old mores and values. Close to his origins, he was even reluctant to race abroad. Coppi instead became the agnostic paladin of the newly modernising Italy, confident in himself and in the achievements of science. Unlike Bartali, Coppi embraced the opportunity to race in other countries. He was the ‘cosmopolitan’ to set against the provincial Bartali. Their private lives could not have been more different. Bartali married young and remained faithful to his wife. Coppi’s unprecedented decision to leave his wife and children for a married woman in 1953 shocked a country where divorce was illegal and abandoning one’s spouse a punishable crime. But this scandal only endeared him to that part of the country that believed in change and social progress. Even in their training regimes the two men differed radically. ‘Ginettaccio’ was given to hearty breakfasts of meat and eggs, did not disdain wine, and drank copious amounts of coffee to power his way through his races. At a stage’s end, to relax, he would light a cigarette or two. In contrast, ‘the Egret’ followed a scrupulously scientific diet. In place of Bartali’s strong black coffee, Coppi had recourse to a special stimulant, known in its day as ‘la bomba’ - ‘the bomb’ - an undefinable mix of chemicals in which amphetamines played a leading part. As was pithily put by Curzio Malaparte, at the time one of Italy’s leading writers: “Bartali has blood in his veins. Coppi has petrol.” Inevitably, Bartali’s and Coppi’s supporters aligned with the two political poles that then dominated Italian life: the Christian Democrats and the Communists.

To return to the photograph: speculation is still rife today as to whether it was completely staged or the representation of a real event that had occurred earlier and that the cameras had missed. Some would later assert that the water bottle was in reality a brand of mineral water, and the photograph an advertising coup. In later years, both Bartali and Coppi would steadfastly avoid clearing-up this mystery.

This photograph can variously be seen as a metaphor for Italy's incipient economic and social boom, a token of sportsmanship, a staged publicity stunt, a gesture of common humanity.

Coppi would win the 1952 Tour de France by a margin of almost half an hour over the second-ranked cyclist, the widest gap in the history of the race. Bartali instead came in fourth at 35' and 25". In 1953 Coppi would win the Giro d’Italia for the last time. Bartali would win his last two major road races in the same year.

The photograph of the two sportsmen passing the water bottle has since become ubiquitous. In Melbourne one can see it blown-up to a large size on a panel outside a Lygon Street Italian eatery in the suburb of Carlton.

In this high-technology era of ours, this photograph still speaks at least two truths. It represents a society’s collective effort to rise out of oppression and the ashes of destruction, beyond the factionalism of political persuasion, religious and ideological belief. It is also an example of sport as a metaphor for what we were and who we have become.

On an abandoned farmhouse wall on the side of a narrow provincial road winding its way through the Italian countryside, you may still catch a glimpse of “Viva Coppi!” or “Viva Bartali!” written in stark broken white script. Back in the 1950’s, when these words were written freshly in the vigorous strokes of a hand more used to the rough work of the fields, agricultural workers would put down their tired steel implements at the news of the Giro drawing near. In their worn clothes, stitched to resist the passage of time, with some still nursing wartime wounds, they would all line up to cheer Bartali and Coppi’s passage in a whirring of well-oiled shining steel wheels and a fleeting puff of dust.

The picture of these champions on a steep rise and printed on curling pink newspaper sheets remains in our memory: a dirt track high up in the Alps, a water bottle passed between dusty faces, sweat etched and veins standing frozen in the effort.