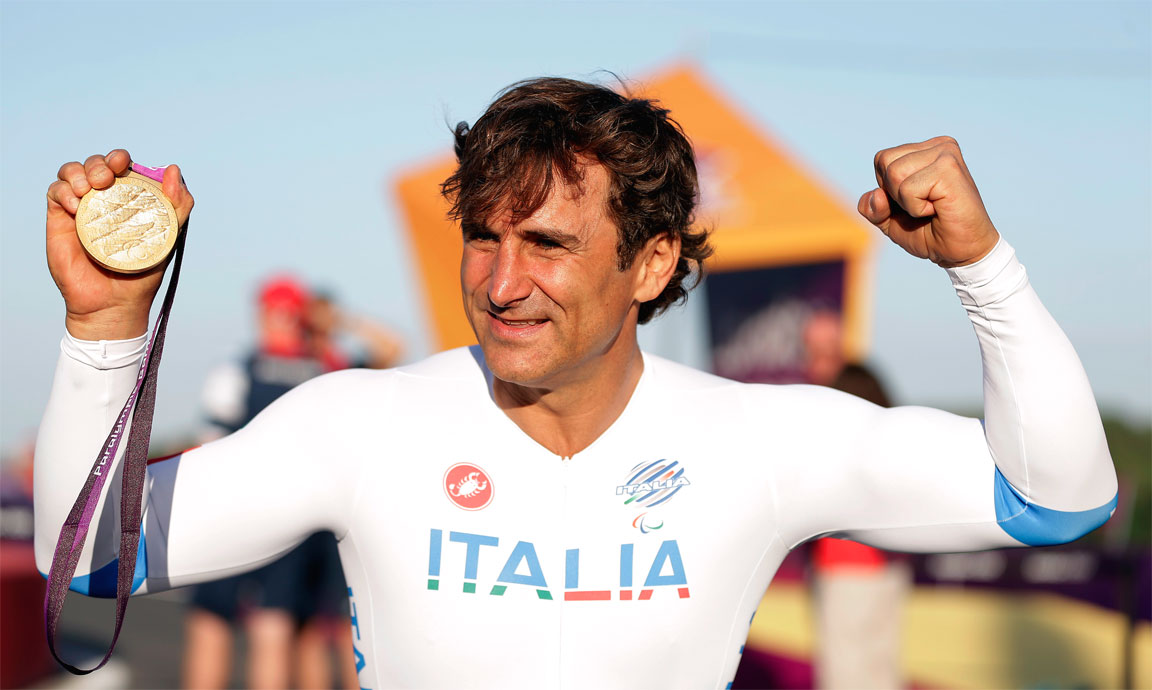 In a telling and often moving chat a few years ago with American talk-show host David Letterman, Alex Zanardi discussed his then upcoming challenge—an Ironman Competition. Asked whether he feared the prospect of possible sharks lurking in the water during the swimming section, the endearingly self-deprecating and always forward-looking sports great replied that the shark would most probably look up and swim away, deciding that he was not worth the trouble.

Alex Zanardi has no legs. His quip was a reference to this, telling Letterman that any shark would think another shark had already taken interest in him.

Dark humour certainly. More significantly though it is a measure of this Italian-born extraordinary ability to look beyond his disability, avoid self-pity, reappraise and rebuild a sporting career, indeed a life that is the envy of most able-bodied people, let alone sportspeople.

Born in Bologna in October of 1966, Alex Zanardi is a legend, not only for his achievements prior to the catastrophic Formula One accident that took both his legs in an instant, but for the incredible life he has lived since that day in 2001.

Always an optimist, Alex Zanardi never let circumstance get in the way of his drive and passion. At the age of thirteen, unable to afford a racing kart, Alex is said to have built his own out of pipes and off-cuts he found in and around his childhood home of Castel Maggiore. Thus armed, he developed a fascination with karts, cars and racing, dreaming of one day being good enough to compete on the world stage, if only he could cop a break and prove himself on the track amongst the professionals he admires from afar.

It is not until 1988, nine years after the tragic death of his sister Cristina in a car crash, that Alex Zanardi comes to the attention of the Italian Formula 3 people who see in his raw talent and intuitive driving sense, a possible future competitor. On the track Alex proves to be both daring and skilful, showing an instinct for being able to carry off manoeuvres others seem unable, or unwilling to attempt.

Perhaps not surprisingly, within three years Alex is snapped up by the Il Barone Rampante Team in the Formula 3000 category and wins his debut kart race, placing an incredible second in that year’s championship. This performance brings Zanardi to the attention of the Formula One teams and he joins the Jordan team in late 1991, going on to have three starts, progressing to testing for Benetton the year after and driving for Lotus the year after that—where he gets a point driving in the Brazilian Grand Prix.

This is a rather remarkable career start for the young driver, but Zanardi feels compelled to tackle a new challenge. By 1994 he moves to Sports Car Racing, starting out in a Porsche Supercup event, moving again in 1995 to the Cart Series where he struggles for a year before Rick Gorne, Reynard’s Commercial Dirtector, puts him forward to the Chip Ganassi Racing Team where he proves his mettle and Gornes’ faith in him. Through taking pole position in only his second race, five pole positions for his rookie year, and a third placing overall in the Championships, Zanardi goes on to cap off the year by taking out Champ Racing Rookie Of The Year.

Life is good for Alex Zanardi. He is popular amongst his co-drivers. The fans love his exuberance and flair both on and off the track. The fact that he now has a signature saluting gesture –the rubber-shredding donut, after every win, endears him to the spectators, and his lack of ego makes him a media favourite. Formula One needs him, and in 1998 he is back there, this time driving for Sir Frank Williams, against the likes of Schumacher, Coultard, Hill and Frentzen.

Zanardi would have always been a crowd pleaser. His easy manner, his lack of pretence, and his sheer passion for life made him an almost irresistible force. It is the horrific accident on the EuroSpeedway Lausitzring, Germany, in October 2001, driving in the American Memorial post 9/11, in his distinctive red kart, that ironically will make him a sporting legend and inspirational human being.

In that accident, which takes place just as he exits a regulation pit stop, Alex loses both legs in the instant the other car spears into his, taking out the entire nose section of Zanardi’s car, and leaving him fighting for life with just one litre of blood left in his body as he is rushed to hospital and falls into a coma from which he doesn’t wake for five days.

It is here that Zanardi shows his true grit and refusal to let circumstance dictate outcome setting in motion a post-accident triumph of the human spirit.

After fifteen operations in forty-six days, constant and dramatic pain, Zanardi not only walks again in three months, he also decides that the prosthetic legs he has been given do not suit the lifestyle he wishes for himself, so Alex designs his own, eventually modifying his artificial legs to allow him not only to walk again, but to return to motorsports as a competitive driver by 2003 in a purpose-built car with hand-operated brakes and accelerator controls.

In a show of defiance, Alessandro Zanardi climbs into a rebuilt copy of the car he crashed in and as a ceremonial gesture, finishes the last thirteen laps of the race he didn’t finish two years earlier. The media and the lovers of sport love him for it. Such determination not to be defined by his disability becomes a hallmark of Zanardi’s life post-accident. That same year he goes on to drive a BMW for the Roberto Ravaglia Team Italy-Spain in the European Touring Car Championships. Two years later, with the European Touring Cars Championship now rebadged as the World Touring Car Championships, Zanardi wins the first World Series race and goes on to other podium finishes.

As long as one has something to fight for, Alex once mused, “even the greatest defeat can be turned into the greatest victory.” One would have thought that by simply returning to racing he had met his own criteria for victory-but it was not so. In 2009, Alessandro Zanardi shifts gear again, this time to hand cycling, competing in the 2009 Para-Cycling Road Championships. In the same year he competes in the Venice Marathon and the Rome City Marathon-disabled category. In 2011 he enters the New York City Marathon for the fourth time-and wins. It is truly a victory of the human spirit over physical and mental challenges.

A man with no legs is not a man without purpose, seems to be Zanardi’s premise. He gives full voice to this by being named one of Top Gears Men Of The Year’ in 2012, on the heels of winning two gold medals and a silver for Italy in that year’s London Summer Paralympics . He backs this up with a sterling outing at the 2014 Ironman Championships where he uses a handcycle for the cycling section and a wheelchair for the running section, going on to compete at the previously mentioned Hawaii Ironman in 2015.

Asked once why he did what he did, Alex answered that the same question might not be asked to an able-bodied person, as though for him the disability is actually an adjunct to his life, not a defining factor of it. He sees no limits to what he can achieve, when, as he has repeatedly stated, something ‘pulls the inside trigger’ and an individual elects to either move forward or stagnant.

Most recently Alex competed in the Rio Summer Paralympics, where he won gold medals in both the H5 category road cycling men’s time trial and the mixed team relay, along with a silver in the road race.

Married since 1996 to Daniela, and the father of a son born in 1998, Alessandro Zanardi continues to exemplify all that makes a hero a legend and a role-model worth emulating and admiring. Yet Zanardi doesn’t credit himself for his many and varied successes. His humility won’t allow it. The ‘inner trigger’, it seems, is the support and love of family, friends and fans who feed his innate desire to never give in or give up. And this makes him truly inspirational.