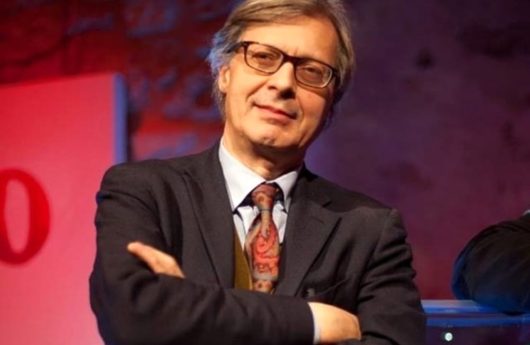 The temperamental art historian with a bad memory of Australia

Vittorio Sgarbi is a famous Italian art critic and historian. He is a most prolific author and some of his books, though quite expensive, have become best-sellers. Sgarbi is a media personality, and has made a name for himself with his boisterous invectives at people who in his view are incompetent or inept in their role as public figures.

At times, he does not hesitate to use foul language, a trait of his temperament in striking contrast with his otherwise refined manners.

Perhaps it is a case of destiny in a name. Sgarbi is the plural form of the Italian word “sgarbo” meaning “slight” in English. During the 1990’s, he hosted an Italian television program called “Sgarbi quotidiani” that allowed him to attack publicly whomever had done something he thought was wrong.

His knowledge of classical art is so extensive that even those who hate his tendency to cross the threshold of verbal decorum, admire it. He has remarkable skills as a public speaker and can talk ad lib for hours on end about practically any painter from Giotto to Picasso (which is the title of one of his many books). His conferences are usually packed with people and his television appearances always attract a great deal of interest.

He is also a great collector of works of art. Recently a selection of paintings from his personal collection were exhibited in Osimo, an ancient town 15 km south-west of the port city of Ancona on the Adriatic Sea. Titled “The Secret Rooms of Vittorio Sgarbi”, the exhibition included works by 16th to 18th century artists and attracted tens of thousands of visitors.

How was he able to acquire so many valuable paintings? “I started buying art when I stopped with books,” he says. “I was earning millions from television and I spent every penny of it. If I had earned as much as Bonolis (a popular Italian TV presenter), I would have bought the Louvre. For an art historian – he adds – collecting is very similar to an enjoyable form of competition, in which you show that you are able to recognise an artwork or artist before everyone else. A true collector will never have a Raffaello at home, but might just kill to get hold of a Bastianino.” Bastianino, by the way, was an Italian late Renaissance – Mannerist painter of the School of Ferrara, the city where Vittorio Sgarbi was born and raised.

Vittorio Sgarbi came to Australia some fourteen years ago when he had been appointed by Berlusconi as deputy minister for the arts. He was instrumental in putting together an exhibition of renaissance and baroque paintings called “The Italians: Three Centuries of Italian Art” held at the National Gallery of Australia in Canberra. The exhibition included paintings by Titian, Caravaggio, Canaletto, Leonardo, Michelangelo, Veronese, Correggio, Raphael, Tintoretto and Tiepolo, but was scathed by the chief art reviewer of The Australian newspaper.

Ironically the reviewer was of Italian descent, his name being Benjamin Genocchio but evidently not well disposed towards his ethnic background. In his breezy article, Genocchio wrote that “this is a resoundingly average exhibition of minor pictures by second and third division artists, while even works by the drawcard names of Leonardo, Raphael and Michelangelo are tiny drawings rather than lush oils.” There was worse to come. “Many of the paintings have been badly restored —  that is cleaned and repainted, destroying much of their original colour and brushwork.” While Genocchio may have been onto something when he singled out Caravaggio’s Narcissus as a possible casualty of “heavy-handed restoration,” he could not have caused more of a fuss had he dismissed the works as fakes.

Sgarbi went on a rampage and called a press conference. “There is a limit,” he declared, “to ignorance on any subject, and I have to say that this writer is one who has demonstrated greater ignorance on matters than I have come across in my experience. To refer to these people as second-rate is an error. All the artists are not only in the State museums, but they are in the Uffizi, in the main galleries of Rome, and they are also in the principle galleries in the US… to say they have been restored badly is an insult to the… experts in Italy.”

Then came this: “The Italian government will seek redress from the Murdoch press for this matter. Any damages paid would go to a good cause, namely the restoration of art. The sort of figures may be A$50 million to A$100 million–we don’t know.” Audible sniggers criss-crossed the conference room and Sgarbi protested: “This is no laughing matter!”

The controversy became even harsher when it came to be known that three paintings owned by Sgarbi were included in the exhibition. The Australian newspaper adding fuel to the fire, quoted the director of paintings at Christie’s Australia, David Cook, who said the exhibition would “absolutely” improve the value of its featured paintings. “If I owned a picture,” he said, “I’d love to have it in a touring exhibition going to the National Gallery of Australia.”

The Australian also took great delight in pointing out to its readership the colourful history of Sgarbi, painting him as a vexatious litigant and “the intellectual bovver boy of Prime Minister Silvio Berlusconi.”

Enough was enough for Vittorio Sgarbi. He rushed back to Italy and vowed he would never visit Australia again. And he has since stood by such resolution.