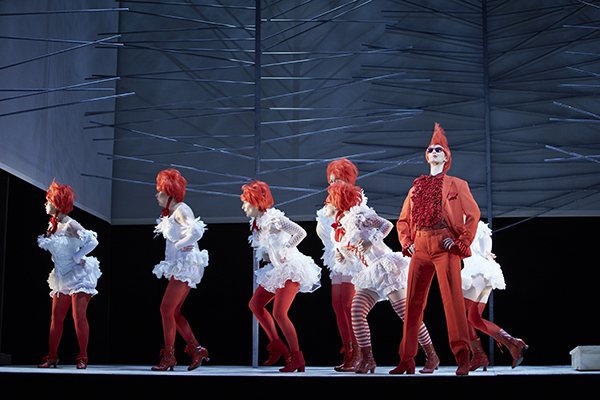 Rebecca Castellini is one of Western Australia’s most sought-after young Opera singers, having performed in a number of major productions including Tosca, The Merry Widow and Lucia Di Lammermoor. But if Castellini’s name doesn’t’ ring any bells, it’s because up until last year the Perth songstress had been performing under a different name – Rebecca Bunn.

The young singer has since decided to veer into a different creative direction moving from Mezzo Soprano to Soprano roles and as a result adopted her mother’s Italian maiden name, Castellini as her stage name. Now with a new name, a new vision and a breakout role; 2018 has shown that Castellini has found her voice and she’s ready to share it with Perth and beyond.

In West Australian Opera’s latest production of Don Giovanni, Castellini has scored her biggest role to date as peasant bride Zerlina. On the eve of her wedding, the impressionable Zerlina becomes besotted with the notorious Don Giovanni and is torn between her betrothed and the promiscuous titular character. “To date, this is the biggest role I’ve ever done, which brings challenges and its own excitement”, Castellini says during a break from rehearsals. One of the major highlights for Castellini is starring alongside seasoned Opera singers including Jud Arthur, Emma Pearson and Aria and Helpmann award winner Teddy Tahu Rhodes who plays the titular character. “I am the most inexperienced member of this cast and so for all of them to have been full of support and knowledge and advice has been so welcoming…it’s great to have people around you who know exactly what they are doing and if they see you are a little bit lost, they are able to give up their time and their guidance which is so invaluable”.

While Castellini is thrilled to have scored a major role alongside such a high calibre of performers, the Soprano assures that there is little time to pinch herself with her busy rehearsal schedule. “You have to catch yourself out as there are only glimmers of “how did I get here?”, because the process is so intense and the focus is doing the job, crafting the character and the sound…I’ve worked really hard to get here, so I haven’t had these “is this happening moment?” but more so “wow this is happening” and I would like to really keep working and improving my acting, my voice and my craft so I can keep doing what I love”.

While Castellini has enjoyed playing Zerlina, which she describes as a role she can “sink” her teeth into, she shares she has a soft spot for comedy, which she showcased in her performances as Farsquita in Carmen and the Cock and Jay in The Cunning Little Vixen. “I think I naturally like comical characters, mostly because everyone needs a bit of comedy in their life…What’s been great about this year is I’ve started off with a small role and as each role has come along there’s been a bit of growth in responsibility and the amount I have had to learn and portray. I wouldn’t say I have a favourite yet, I’m just excited to be up there doing whatever the role is”.

It was Castellini’s first lead role in a high school production of the musical comedy Thoroughly Modern Millie that made her decide she wanted to pursue a career in the arts. Both her singing and drama teachers encouraged her to audition for WAAPA and after successfully auditioning for the classical voice program she became enamoured with the art form. “I didn’t have a background with Opera or classical music, but I studied saxophone at school and knew how to read music, but I wasn’t exposed to the power of the human voice in an operatic way and I fell so in love with it…it was very much an opera chose me and I fell into it scenario”.

Two of Castellini’s biggest supporters were her late Italian grandparents who immigrated from Emilia Romagna to Perth after the Second World War. “My nonni were incredibly proud of me to pursue music and to pursue opera, it was sort of nationalistic…it was something that their ear was accustomed to and so to have one of their grandchildren pursue it meant quite a lot to them,” she says. Castellini recalls being introduced to opera at her grandparents’ house where they had Pavarotti records and cd’s scattered throughout the house. It seems only fitting that the Soprano has adopted their last name as her stage name. “It reconnects that line of heritage and also the pride my nonni had for opera”, she says. “They were very strong people and part of my tenacity in the hardest times in my singing career has really stemmed from them”.

While 2018 has been a breakthrough year for Castellini, it seems 2019 is already off to a promising start. The young singer will be playing Annina in the City of Perth’s Opera in the Park: La Traviata and she hinted that there are some other exciting projects in the works that will see her broadening her horizons from Perth and beyond.