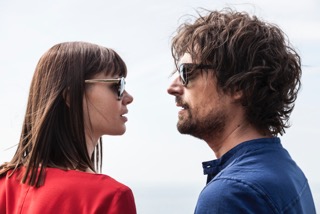 Melbourne filmmaker narrows 'The space between' Italian and Australian cinema

Considering how vibrant and passionate the Italian community in Australia is, it’s both concerning and disheartening how few Italo-Australian stories have made their way onto the big screen. Sure, we all laughed with Vince Colosimo’s Frank in “The Wog Boy” series and went on a journey of self-discovery in “Looking For Alibrandi”, but since then Italo-Australian cinematic stories have been few and far between – until now.

Melbourne-based director Ruth Borgobello’s debut feature, “The Space Between” is the first of its kind, bridging the space between the two countries as the first ever Australian-Italian co-production.

The film centres on Marco (Flavio Parenti), an ex-chef who is mourning and has turned down a job at a restaurant in Melbourne. By chance, he meets Olivia (Maeve Dermody), a young Italo-Australian from Melbourne who has gone to Udine on a family mission.  Together the two navigate through the crossroads in their lives amongst the backdrop of beautiful Udine. Borgobello showcases the beauty of Udine throughout the film in a similar way that De Sica celebrated his beloved Naples and Fellini showcased Rome. It is hard to imagine that Borgobello initially did not intend to film the movie in Italy, let alone Udine. “I initially wrote the whole screenplay to be based in Australia. I didn’t even contemplate doing the first film in Italy…When I was writing it, I was also spending a bit of time in Italy and I just felt like the story was calling to be set there,” she said. “I also wanted to bring a part of Italy that isn’t often seen. Even all the Romans who worked on the film fell in love with Friuli and never knew about it.”

The Friuli-Venezia Giulia region has a special place in the director’s heart. It is where her father Maurizio was born, and where she met her husband Davide Giusto. In fact, the film is loosely based on Borgobello’s own experience meeting Giusto on the day someone close to him had died. During production, Giusto came on board as a co-producer as well. “The film is so important to him personally as well, so he really protected it … it was actually our Italian co-producer who told him he should produce it because he was naturally doing it,”she said. While some would be hesitant to mix their personal and professional lives with their spouse, Borgobello insists it was a wonderful experience. “It was great … though sometimes it was stressful because all we talked about was the film.”

One of the most stressful tasks was casting the two lead characters in two different countries. For the role of Marco, Borgobello selected Italian-French heartthrob Flavio Parenti, who has worked with high profile directors Woody Allen and Luca Guadagnino. “I just had a great feeling as soon as I saw him. He had this great sensitivity and depth, yet this real sparkle about him that I wanted to bring out in the character of Marco.” Due to casting having been done in both Italy and Australia, the two lead actors only met each other for the first time a week before filming. “I hoped they could connect and not knowing till they met for the first time, a week before shooting was very nerve wracking but they just really clicked, and they put a lot of effort into building the dynamics and the chemistry.”

Borgobello hoped the character of Olivia would resonate with Italo-Australians. “I feel so strongly Italian but when I go to Italy they see me as being very much Australian … I wanted her to represent that sort of sense of freedom and adventure that Australians have, to be a bit more open-minded and spirited.” Borgobello insists the Italo-Australian connection is “still strong” and believes there is a renewed interest in Italian cinema thanks to The Lavazza Italian Film Festival, however acknowledges certain parts of the culture are fading away. “I hope the younger generations can tune in culturally to food and wine and music as a way to reconnect and when it’s in your blood it’s very strong, but the language is getting lost.”

Despite the difficulties producing a film in two countries, Borgobello who lists Sorrentino and Fellini as her inspirations, says she is looking at directing more Italo-Australian films for the big screen and hopes other directors will follow suit. “That’s definitely my passion, being half-Italian half-Australian is who I am. It’s all about finding the right story and there are so many great Italo-Australian actors … and contemporary Italian cinema is really strong at the moment. It’s a very tough time in Italy, so I think it’s so important that Italian cinema has that voice with what’s going on at the moment.”