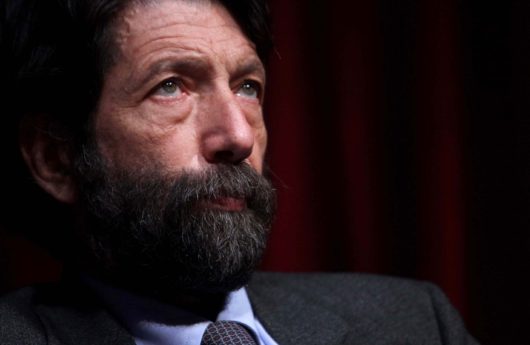 Massimo Cacciari, the faithless philosopher who thinks of God

As well as achieving the status of a leading Italian academic philosopher, the 72-year old Massimo Cacciari has devoted a great deal of his life to politics, holding a seat in the Italian parliament for seven years when he was still relatively young and the office of Mayor of Venice (his native town), for three terms, the last one ended in 2010.

He is now retired from active politics but he continues to take part in it as a commentator in television talk shows and as an editorialist for La Repubblica, one of Italy’s major daily newspapers.

It is impossible to encapsulate his accomplishments in the space of a feature article especially in regard to his philosophical production. This is a man who has published more than forty books, several of them translated into all major European languages, and who has written hundreds of articles, essays and papers.

The range of his study has gone well beyond the borders of academia, and he has often broken new ground in philosophical speculation with impressive insights. In his most ambitious theoretical books, he shows a masterful command of classical, modern and contemporary philosophy as well as Christian theology. Many of his works deal with very complicated matters, and consequently are far from being accessible to the common reader.

On the other hand, since its origins in ancient Greece some three thousand years ago, Western philosophy has accumulated an immense reservoir of theories and whoever ventures into it, is likely to lose his way without the guidance of a master. Massimo Cacciari is such a master, a role he continues to fulfil as Dean of the Department of Philosophy at the University of Vita-Salute San Raffaele in Milan, which he founded in 2002.

As he grew as a thinker he decided to face the greatest philosophical challenge of all by confronting himself with the “negative thought” of philosophers like Friedrich Nietzsche, Martin Heidegger and Ludwig Wittgenstein. Each one of them, in their own distinct way, came to the conclusion that essentially life is without objective meaning, purpose, or intrinsic value and rests solely on the individual ability to cope with it before being reduced to nonexistence by death.

Massimo Cacciari came out of this period of philosophical confrontation developing the idea that philosophy cannot limit its sphere of inquiry to the apparent hopelessness of man’s existence. Even if he is not a believer, he thinks that the true philosopher cannot do without thinking of God. “What is the ultimate thing the human mind can think of?” was the central question he raised while attending a debate on Christian theology to which he answered “God. All philosophers have thought of Him in their own way and for all of them He is the ultimate thought. For Plato God is the utmost good which is unspeakable, inexpressible and incommunicable while for Aristotle God is the supreme Being, the cause of everything, Love that moves everything and is moved by nothing, and whence all creatures come from”.

Hardly a “negative thought”. Massimo Cacciari however remains deeply rooted in reality. What is striking in his books or his talks is the way he discusses the unreal with a realistic approach, which is the mark of a great thinker. He is a gentle man but can become very grumpy when he comes face to face with trivial interlocutors.

Let’s see how he responds to some questions that baffle everybody’s mind.

What does he think of death?It depends… for an extreme atheist death is pure annihilation of life that comes from nothing and ends up in nothing. This is the quintessence of nihilism. For the believer it is transitus [passage] to another life, which is beyond life as we know it, and as such beyond human grasp. There is no unequivocal definition of death. The only thing that can be said in general terms is that human beings are the only animal species who think of death and therefore we are by means of not to be. As a matter of fact, death is constantly in our mind and since we constantly think of death, which is the negation of life, we always think of life beyond life. This is the only trait shared by believers and non-believers as well as by all the various faiths, religions and cultures of the world.

Do we all have our own life path to follow?Yes, we do. The most arrant scoundrel follows his own path as well as the most consummate sage. It cannot be otherwise. We are those living creatures who are endowed with logos and, whether we like it or not, forced to live in a community. We think of our death and decide the way we want to live. Everybody follows his/her course. There is no pre-constructed itinerary.

How can we distinguish good from evil?It depends on what kind of evil we refer to. Sickness, suffering… these are evil easy to recognize. If we talk of evil from a moral point of view, then we must consider cultural and historical differentiations. The idea of evil varies from culture to culture and from time to time. What can be said in general is that evil derives from the incompleteness and flimsiness of the human disposition. We are a multiplicity of identities, interests, tendencies and instincts and if we are unable to reconcile this multiplicity of things we are within and in regard to the others, then evil comes forth. Evil is when we are not in harmony with ourselves and with the others. This is the only thing it can be said of evil generally speaking. Then if we want to go into the specifics and talk about the concrete expressions of evil, we must deal with the historical, cultural and social factors determining the different conceptions of good and evil.

Man, from the remotest times, has always been anguished and terrorized by the unknown. Then religion came followed by rationality and philosophy. What does he sees this process?Let me say that this line of thinking is rather elusive because there is no before or after when we look at the implications of being. It is not a matter of religion coming first and then being superseded by reason, nor of religion being something that has nothing to do with reason. This cheap thinking belongs to late positivism. Human evolution did not proceed this way, from myth to religion and from religion to the use of reason, and then to science… this is a ridiculous suggestion. Fortunately, this is not the way human beings evolve, assuming that there is an evolution at all.

What has helped him in his life?The fundamental element in my life has been my education, my formative process. It can happen by all means that one is suddenly enlightened; there can be an experience like Buddha’s under the tree or that of Saint Paul who made him fall from the horse. I frankly did not have an experience of such kind but I don’t exclude that it can come about. In my case it didn’t. I have never encountered faith. I am a non-believer. Nonetheless I am also culturally, vitally, existentially interested in the experience of those who believe and I don’t think at all that those experiences are invalidated by reason. Faith and reason are distinct from one another but go on together, and I think they will continue to do so.

What does he think the meaning of life is?You can put together what I have been saying so far and something might come out of it. I wouldn’t know how to answer this question. I don’t think that there is something as “the” meaning of life.