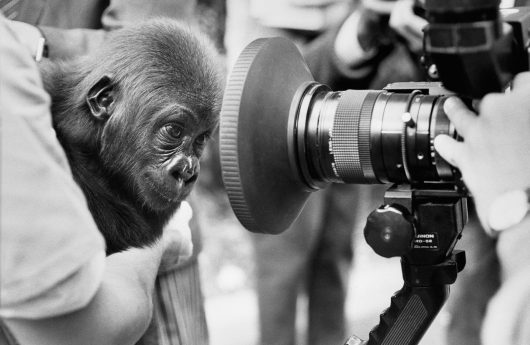 John Casamento’s name would be well known to many newspaper and magazine readers across Melbourne as a result of his 52 years in photojournalism. His assignments have covered major news stories in politics, arts, sport, and those that headline from Mick Jagger to the late Pope, John Paul II.

We could not forget Melbourne zoo’s baby gorilla ‘Mzuri’, the world’s only gorilla to survive after artificial insemination. His pictures were seen around the nation and the world.

Meeting him has been a real surprise, especially because I had no idea who John was. I just knew he had a long career as a photographer however, during those hours spent at his son’s house in Carlton, I discovered he is more than that. He is part of the history of photojournalism in this country. Despite this, he stands out for his modest and quiet attitude, a genuine smile and strong humanity, something you usually don’t find in people of a high professional status.

We were sitting on the patio, John, Maria his wife, and his son Peter and we warmed up by the autumn sun, beside us a little table set with sweets and berries. He took us back in time to the year his father, then17 years old, left his native Aeolian island to seek fortune in Australia. After 25 years spent in Melbourne, John’s father finally decided to visit his father and brother, who had remained in Italy and were both fishermen. During his journey he bought a very simple camera, a Kodak: it was the first camera John handled in his life. He was immediately captivated by it and started shooting photos of his mates, and later on, together with his older brother Pietro, interested in photography as well, learned how to develop film using the photo chemicals and tanks. They had the habit of turning the house bathroom, or pantry, into an efficient darkroom and, while the lights were off, the fantasy flew waiting for the snapshots to materialize among their fingers. Could you imagine the excitement of those moments? Maybe similar to the one a kid feels when, a pencil in hand, for the first time creates signs and lines and shapes on a white sheet.

When John turned 16 he left school and got a job at The Sun News-Pictorial, now known as The Herald Sun, and spent 36 years there. “At that age I decided I wanted to be a newspaper photographer rather than a teacher, a choice I’ve never regretted”!, he says smiling. After the first 4 years of cadetship, both in the darkroom and accompanying the senior photographers, John Casamento became a qualified photographer and photojournalist. Like his colleagues he mostly worked on simple activities: “We never had the luxury to choose our own assignments. I personally complained, but those were the rules and breaking them would have meant being dismissed.” Nevertheless John had wonderful job experiences that enriched and molded him, beyond the generic definition of being a photographer but something more, a reporter of life in its thousands of shades, part journalist, part artist and technician and so on.

In 1986 John realized one of his dreams: his editor sent him to the Vatican for a feature on John Paul II and even more extraordinarily he became part of the papal entourage which accompanied the Pope on visits to 6 countries: Bangladesh, Singapore, Fiji, New Zealand, Australia and The Seychelles. “Because I am catholic and my faith is the most important thing in my life I was very pleased. That experience was the highlight of my career”, John says while Maria laughs, adding jokingly: “The faith is the same reason I’ve never divorced him”, probably referring to her husbands absences, over the years, often overseas.

John is the father of 4 but only his son Peter inherited the same passion for photography. “At weekends I liked to take my children with me, where appropriate of course, and Peter was particularly interested in my job. He left his studies in Civil Engineering to become a professional photographer and now he has a leading business, the Casamento Photography, and he is very good, as passionate as me”, he says proudly. Today John works for Peter part-time: his assignments are reporting all the special events going on at the Catholic Archdiocese of Melbourne, a proof of a long-lasting bond of this accomplished man with religion: “I have been taking pictures since I was 16, I like any work at all! I have always enjoyed my work and its variety”, and a question arise spontaneously: what’s John own definition of photography? “To me photography means interaction. I mostly love shooting people in real life, no matter who, poor and wealthy, saints and sinners.  I chose and stayed with it all through my life”, like a lifelong wedding.

Not coincidentally Casamento is the Portuguese word for wedding, as the President of East Timor once pointed him out cheerfully. John and a lifelong marriage with photography.

Recently the Casamento family sold a picture representing a young Mick Jagger to raise funds to help children affected by heart diseases and sustain a special surgery known as the Fontan procedure. www.fontanregistry.com