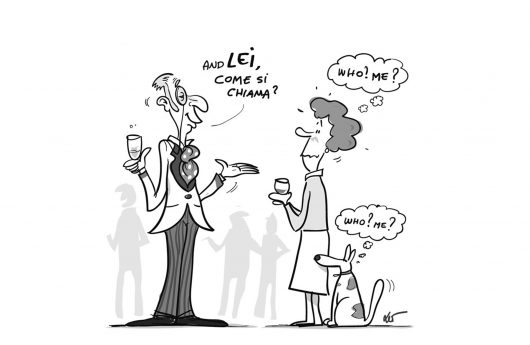 Cortesia italiana, the legacy of a forgotten past

Immediately after I met my wife the path that led me from celibacy to the conjugate status had been really short. Only a month passed away since we started dating and we were already living together; six weeks had been long enough for me to decide to propose to her (and for her to say the fateful ‘yes’); the following year for the first time in my life I was visiting Australia and my future family.

All of this eventuated with no real communication. Of course one might consider a conversation between two lovers ceaselessly interrupted by the consultation of the Italian-English dictionary a sweet tête-à-tête, however the ability to convey the plot of your favourite film is a dialogue of a different kind.

A few months after this tsunami sweep us away we decided that it was time for my then Australian fiancée to be introduced to my family.

Both of us were excited for yet another adventure, however we had curbed our enthusiasm. My then fiancée a few steps away from my parent’s home asked me: “In what way should I greet your parents?”

“Well”, I observed with candour “my parents aren’t formal at all, but as they are elderly you should address them with a ‘courtesy pronoun’. I mean in the third person singular.”

The English language is more pragmatic than the Italian one (the personal pronoun “thou” is a formal archaism and respect is shown in other more simple address forms such as “Madam” to a woman or “Sir” to a man); Italian has three forms of address – “you” – Tu (second person singular known as informal and familiar expression); “she” or “he” – Lei (third person singular) and “you” – Voi(second person plural) are instead a pronoun of courtesy (or even reverential).

In Italy, unless you do not want to be considered rough and ill-mannered, it is taken for granted to address elderly people, professors, doctors or simply a stranger in the second person singular. For instance, I would never enter in a public office addressing the worker behind the desk with an abrupt Tu – especially if they appear to be elderly and have never seen before. But above all if I want to be promptly served…

In any context today in which respect and social distance is required, the pronoun of courtesy is a given.

I recall my father addressing my nonno in the most formal second person plural Voi, and typical from southern of Italy. Those were clearly the old days, and this is demonstrated by the concern that wanders between the advocates of the Cortesia Italiana.

Italian writer and essayist Umberto Eco has recently expressed his discomfort about the progressive use of the colloquial Tu between the younger generations. The Lei e Voi, according to Mr Eco, became an eerie reminder of a flattened and generic past.

In fact, if we quickly trace the past we find out that in Ancient Rome only the familiar Tu existed and that the Lei originated during the Renaissance period and thereafter raged throughout the peninsula. Things changed with the advent of Fascism. The regime had imposed the use of the Voi, considered more virile than the third person singular, which was never appreciated by the fascist legislators because of its Spanish origin.

A past that seems articulated and so far away and that is sadly often out of reach for the youngsters. As a matter of fact, according to Mr Eco, the increasingly frequent use of the Tu reflects the short historical memory of young people.

Let us go back to my wife.

As might be expected my wife peered at me sideways and conveyed to me her thoughts and feelings. First she misunderstood, and then she was taken by surprise. I also caught a veil of despair that she scrupulously tried to hide. Nevertheless things worked out when I explained the situation to my parents and that it would be too complicated, if not cruel, demanding that my fiancée’ conjugate the verbs in the third person singular.

All well that ends well, except perhaps for my Italian brother-in-law who had to wait 20 years before he was granted permission to address my parents with the familiar Tu…